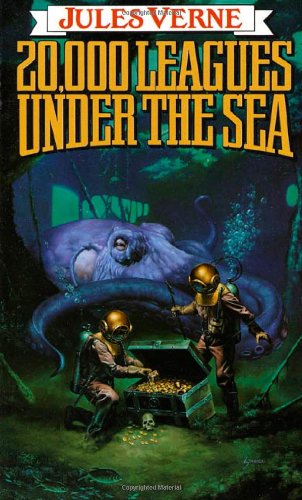 Tor Classics are affordably-priced editions designed to attract the young reader. Original dynamic cover art enthusiastically represents the excitement of each story. Appropriate "reader friendly" type sizes have been chosen for each title--offering clear, accurate, and readable text. All editions are complete and unabridged, and feature Introductions and Afterwords.
This edition of "20,000 Leagues Under the Sea" includes a Foreword and Afterword by T. A. Barron.
Jules Verne is considered the "Father of Science Fiction" because of the power of this--his most famous novel.
""The year 1866 was signalised by a remarkable incident, a mysterious and puzzling phenomenon, which doubtless no one has yet forgotten. Not to mention rumours which agitated the maritime population and excited the public mind, even in the interior of continents, seafaring men were particularly excited. Merchants, common sailors, captains of vessels, skippers, both of Europe and America, naval officers of all countries, and the Goverments of several States on two continents, were deeply interested in the matter."
"For some time past vessels had been met by 'an enormous thing, ' a long object, spindle-shaped, occationally phosphorescent, and infinitely larger and more rapid in its movements than a whale.""
It is this "something" that Professor Aronnaz sets out to encounter--and thus begins the most incredible underwater journey ever. From Atlantis to the South Pole, the reader is taken through dangers, surprises, and the unsurpassed majesty of the marine world.

Good use of historic, geographic and technical knowledge, although I just didn't enjoy this as someone purely reading for fiction.
There was a lot in this book that I can talk about (many of it, I don’t think I would know about), most of it scientific; from marine biology, ocean currents, geology and engineering. I’m not sure how accurate everything is, but if it is accurate it would be very impressive. Setting aside all the science, this is an interesting book, but I felt that at most times when it was about to get exciting it become anti-climatic. I spent most of the time wanting the Giant Squid (or devil fish) to come along to push the excitement level up, but this just never came, until finally near the end. But it was there and it was over as quick as every other climax in this book.

It reminds me of those old corny adventure movies from my childhood. While there is a short burst of climax throughout the book/movie, but nothing really happen. It was an enjoyable read, but I wanted so much more from this classic tale and it never delivered.