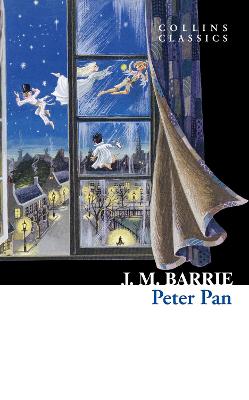 HarperCollins is proud to present its incredible range of best-loved, essential classics.

`Second to the right … and then straight on till morning!’

Desperate to hear bedtime stories, Peter Pan waits outside the nursery window of Wendy, John and Michael Darling. When Peter asks Wendy to fly with him to Neverland, the Darling children are whisked away to a world of adventure – of daring fairies, wondrous mermaids and The Lost Boys.But there is danger in Neverland too: the villainous Captain Hook is out for revenge and will stop at nothing to take it.

Poignant and unforgettable, J. M. Barrie’s classic tale is one of the greatest works of children’s literature of the last century. Its imaginative scope, tender humour and vivid characters will enchant adults and children alike.

I've heard that this is a great book to read if you want to get into classics. If that's the case, I'm not sure the classics are for me. It took me two tries to get through, but I've finally finished a story that almost everyone says they've read and loved.

And while I definitely loved the whimsy of the story, I realized for the first time how diabolical and ego-maniacal Peter really is, and it crushed my soul a little. I didn't notice it in the movies growing up, but maybe, I just didn't know what those traits looked like until now.

Oh well, I'll always have my childhood wonder for my favorite character in memories, even if the book demolished that idea in adulthood.
Initial thoughts: I took nearly a week to drag myself through this book, which I'm pretty sad about. When I was younger, I watched and loved to many adaptations of Peter Pan. I wanted to finally read it and thought I'd find the book at least half as charming. I didn't. I was bored out of my mind. The writing style didn't capture my imagination, and I found the characters as they were on paper rather uninteresting.

It makes sense though, as Peter Pan was a stage play first before Barrie wrote the novel. I think what enamoured me about Peter Pan — children flying, Neverland and the open-ended possibilities didn't translate as well in its written form. The visual impact was missing completely, as were the dreamy qualities about the story.

Basically, I didn't like Peter Pan, the book, but still fondly remember the ideas that I loved from the performances and films when I was younger.

Aside from the magical aspects that Peter Pan has come to encompass, I was also uncomfortable with the sexist and racist portrayals of Wendy, Tiger Lily and Native Americans (referred to as "Piccaninny" tribe). It bothered me that for the most part, Wendy's role was that of a "mother" to the lost boys and that the pirates only considered making her their "mother" or making her walk the plank. It grated on me that every year Peter Pan would return for Wendy, Jane, Margaret, and so on, merely for spring cleaning.

Some might argue Peter Pan is a product of its time but should we really glorify such a book in its original form as a classic when it pigeonholes the role of women and refers to people of colour as savages? Something to think about...
I'm not sure how I missed out on reading Peter Pan when I was growing, but somehow I did. In order to rectify this, I put it on my list of 50 classics to read for The Classics Club by the end of 2017. Although I would have read it eventually, the reason I just read it now was it was the number that came up on the latest Classics Club lucky spin.

I really enjoyed the book, but probably not as much as some others have. I'm not sure if this is due to the fact that I didn't read it as a child or not. I have seen the Disney version quite a number of times and that may have spoiled the way I looked at this book anyway. Although the basic story in the movie is quite similar, in many ways the book is much darker and deeper. Of course, it's hard to know whether or not I would have picked up on this as a child or not anyway.

Most of us, like Peter Pan, have probably at one time or another wished that we didn't have to grow up. However, like Wendy, we have probably had to come to the conclusion that it is inevitable. This tension always seems to be present in reading this book, which my be why it is enjoyed by people of all ages - those who have yet to grow up and those who already have, perhaps with the idea that it might have happened too soon or too quickly.

Unfortunately, because it is a product of its time, some of the ideas and language are dated. Such things as the underlying sexism and the portrayal of the 'redskins' would not be allowed today, but the book is what it is and in its context these things would have been the norm.

This book is worth reading, if only to see the story in its original form. What I saw was that although the Disney movie is a polished effort, it took some of the edge off of it. One thing I wish is that I had read it when I was younger, but it's only one thing among many and I'm sure we all have things like that in our life. Another thing I know for sure is that, unlike Peter Pan, I'm glad I didn't stay young forever.