The Book of Lost Tales: Part One (The History of Middle-Earth, #1) 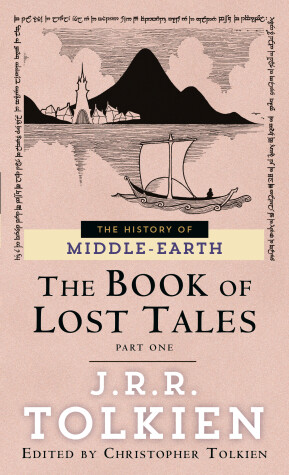 The Book of Lost Tales: Part One (The History of Middle-Earth, #1)

The extraordinary history of Middle-earth, edited by Christopher Tolkien

The Book of Lost Tales stands at the beginning of the entire conception of Middle-earth and Valinor. Embedded in English legend and English association, they were set in the narrative frame of a great westward voyage over the Ocean by a mariner named Eriol (or Ælfwine) to Tol Eressëa, the Lonely Isle, where Elves dwelt; from them he learned their true history, the Lost Tales of Elfinesse. In the Tales are found the earliest accounts and original ideas of Gods and Elves; Dwarves and Orcs; the Silmarils and the Two Trees of Valinor; Nargothrond and Gondolin; and the geography and cosmology of the invented world.

Praise for Book of Lost Tales 1

“In these tales we have the scholar joyously gamboling in the thickets of his imagination. . . . A commentary and notes greatly enrich the quest.”—The Daily Telegraph

“Affords us an almost over-the-shoulder view into the evolving creative process and genius of J.R.R. Tolkien in a new, exciting aspect . . .The superb, sensitive, and extremely helpful commentary and editing done by Christopher Tolkien make all of this possible.”—Mythlore

Finally finished with this! I stopped reading this back in 2018, I think, because I was having a stressful year (...apparently I hadn't realized that 2019 would fucking suck or that 2020 would basically rewrite society). So now that I'm stuck at home with books I've put down for one reason or another, I decided to tackle it again.

You would think that this was a tome with the way it's written, but it's under 300 pages. It's a dense work and full of details on the notes on the histories and function of the language used, as well as changes. It's a hard read even for someone who loves all the minute.

The History of Middle-Earth (17 books)