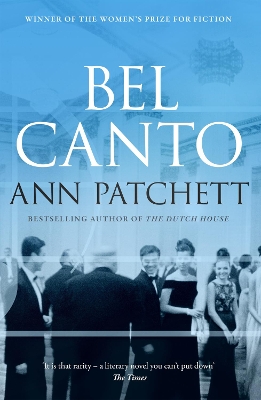 Winner of The Women’s Prize for Fiction and the PEN/Faulkner Award for Fiction.

The poignant – and at times very funny – novel from the author of The Dutch House and Commonwealth.

Somewhere in South America, at the home of the country's vice president, a lavish birthday party is being held in honour of the powerful businessman Mr. Hosokawa. Roxane Coss, opera's most revered soprano, has mesmerised the international guests with her singing.

It is a perfect evening – until a band of gun-wielding terrorists takes the entire party hostage. But what begins as a panicked, life-threatening scenario slowly evolves into something quite different, a moment of great beauty, as terrorists and hostages forge unexpected bonds and people from different continents become compatriots, intimate friends, and lovers.

I just could not get invested in the story or the characters. Then I came to a point where Alex, the opera singer, performs just after the entire party has been taken hostages.

I'm sorry, but I can't suspend my disbelief enough to buy that people who have just been taken hostage by a group of automatic-rifle-slinging terrorists would give a damn about a musical performance, never mind appreciate the finder points of opera.

Erm. Next.
The unexpected bonds that can grow between people is at the heart of Ann Patchett's Bel Canto. Katsumi Hokosawa, a Japanese industrialist, is having his 53rd birthday party in an unnamed South American country. The country has invited him to this party, to be held at the Vice President's mansion, in the hopes that he will invest there. He has no intention of doing so and declines...until he finds out that they have secured the performance of Roxane Coss for the party. Hokosawa is an opera devotee, and Coss is the world's foremost soprano. So he and his translator, Gen Watanabe, make the trip. No sooner, though, has Coss finished her performance than all the lights go out. Suddenly, the partygoers find themselves surrounded by young men bearing arms. They've come to abduct the president, and when they find out he's not there, they're not quite sure what to do but take the 200+ guests hostage.

The hostages are winnowed down over time to the 39 most important men, including the vice president, ambassadors, businessmen, and of course Hokosawa himself (along with his translator) and Roxane Coss. Days go by, then weeks. Gen the translator finds himself very busy indeed as the guests and the soldiers get to know each other inside the mansion. Relationships of all kinds form: one of ringleaders and Hokosawa become chess partners and teach one of the young soldiers, another soldier with a beautiful voice becomes Roxane's student, romantic entanglements form (it turns out not all those soldiers are boys, after all). Always the question looms: how will this all end?

This is the first time I've read Patchett, and she's a gifted writer: her prose is sensitive, deeply felt, lyrical. She has a strong sense of character, and besides the ending, no action the people she creates on the page (and she creates people, complete with their own emotional truth, rather than just "characters") feels false. Even the people she spends less time with feel complete and real. The novel is well-paced and plotted...after the initial high drama of the home invasion, little else happens in terms of events and the action unfolds naturally from the unveiling of personalities and the growing bonds between the people at hand.

What keeps this as a very good book rather than great one, for me, is the very end. The action that two people take is...jarring. Trying to contextualize it in terms of what those two have gone through, you can understand that a rash decision might be made, but it still feels off. And it bugged me a lot, because I'd so loved everything that came before and to close on that sour note didn't feel right. It's 98% of a great book, but it could have been 100% of one and that is frustrating.
This book is very nearly, exquisitely perfect. I don't know when I've been so smitten with a book and all of its people. "How had he come to want to save all of them? The people who followed him around with loaded guns. How had he fallen in love with so many people?" Gen asks himself, and so it is.