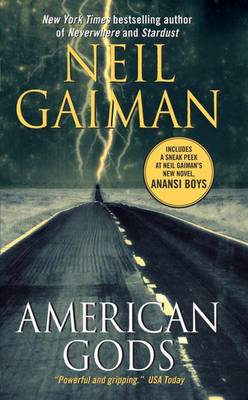 After three years in prison, Shadow has done his time. But as the days, then the hours, then the seconds until his release tick away, he can feel a storm building. Two days before he gets out, his wife Laura dies in a mysterious car crash, in apparently adulterous circumstances. Dazed, Shadow travels home, only to encounter the bizarre Mr Wednesday claiming to be a refugee from a distant war, a former god and the king of America. Together they embark on a very strange journey across the States, along the way solving the murders which have occurred every winter in one small American town. But they are being pursued by someone with whom Shadow must make his peace...Disturbing, gripping and profoundly strange, Neil Gaiman's epic new novel sees him on the road to finding the soul of America.

I think I enjoyed the ideas and themes in this more than I enjoyed the actual execution. The creativeity is definitely top tier and I found the idea of people literally creating the gods to be really intriguing, especially the look on American ideals. I just found much of the way it's written to be somewhat of a drag.
3.75
i don't have any deep insights about american gods, it was a weird and thought provoking ride; one i'm not sure i'll go on again
An ex-con ends up working for a God in this adult fantasy classic.

Honesty time – the audio book is the only reason I finished American Gods. The cast recording is phenomenally directed, immersing the reader right into Gaiman’s narrative. If you’re a fan of the story or you’re interested in reading it, I highly recommend purchasing the audio book. You can borrow it from your local public library, but it’s over twenty-hours long. You’ll most likely have to return the audio book prior to finishing it.

This book truly falls in into the “it’s me, not you” review and rating situation. The cast of characters is sprawling and diverse. Shadow is a great main character with intriguing contradictions – complex yet simple, relatable yet obscure, vulnerable yet strong. His relationships with other character, especially Laura and Mr. Wednesday, are interesting. The plot is intricately crafted, moving characters and settings around like a chess match. Religious stories and folklore from cultures across the globe are woven into Shadow’s story.

But while so many aspects of this story work well, it never really held my undivided attention. I didn’t have a strong connection to anyone in the story, which is never a good sign for me. It almost felt like Shadow was an acquaintance of mine – I was half disinterestedly listening, but I could as easily move on to a good song on the radio. It may not have worked for me, but fans of diversity, mythology, and complex writing will most likely enjoy this novel.

You know, I didn't love this as much the second time round. I do really enjoy Gaiman's prose and storytelling in general, and it's no doubt that his ability to synthesize various plotlines, mythologies, and ideas into one coherent novel is admirable. But I guess I find the traditional gods vs. new gods thing sort of heavy-handed at this point? And the Lakeside murder plot was super interesting and one of the things that really stuck with me from the first time I read this book, 4 years ago, but it does seem like an entirely different story. I seemed to like that about it 4 years ago, and I don't mind that the scope of the novel is generally large, but the Lakeside bit really sticks out like a sore thumb to me. If it were its own novel I'd totally read it. Anyway, I think this novel is hugely ambitious and executed pretty well, but it's not without its flaws. I'll still hold onto it, and I might even revisit it. I think it's possible to enjoy a book that you think has pretty obvious, large flaws.

You know when you're aware of a book for a really, really long time and you have some preconceived notion about what it's going to be like and then you read it and it's not that thing at all and then you don't even know what the hell you thought it was going to be?

Yeah. This was that book. I don't even know how long I've known that it existed. A long time, really. For some reason, there was always a part of me that was like, "You won't like Neil Gaiman," and I literally have no idea why, but this was a thing that I thought, despite the fact that, like, all of humanity likes him. And then my friend Ashley recommended him to me, and I was like, "Okay, noted." But my mental "to-read" list is jumbled and even though it's miles long whenever I'm in the vicinity of a bookstore I forget everything on it and I just never got around to buying it. Then Christmas happened, and Ashley sent me this book, which was a very polite but firm way of saying, "Okay, READ THIS FUCKING BOOK."

So I did. And it was totally not at all what I expected. In a good way.

Honestly, by the time I actually started it, I was pretty sure I was going to like it, despite all my years of thinking otherwise. It has been determined that Ashley and I have very similar taste in books, so I was like, "Yes, okay, I will like this." But, I don't know, it was just different from what I envisioned.

It was sprawling, and atmospheric, and realistic (which is hilarious considering the subject matter). It had depth and warmth and character. Like, it wasn't just a really great execution of an interesting idea - it had zest. A lot of it, in fact. That's what took this from an ambitious, well-executed project to, like, WOW.

I think what was most impressive was how much it covered. There was the mystery of the annual disappearances (which, by the way, I figured out like half a page before the reveal, and gasped), there was everything with Laura, there was everything surrounding Shadow's work for Wednesday. Like... it felt like a bunch of books all in one: a portrait of a small town, a disturbing mystery, a modern war tale. So much happened. Things were constantly happening. But it never felt like there was too much going on, at all, even though THERE WAS SO MUCH GOING ON. Even at the end, when you're like, "Well, okay, things are going to wind down now," NO, THERE IS MORE. So much more. And I loved that!

I also loved the characterization. There were a lot of characters, and I just liked them all. Even the minor characters were developed sufficiently enough for me to have a soft spot for them (Chad Mulligan, y'all. He was awesome), and there were, of course, characters who were kind of assholes but I liked anyway.

I understand that this is not everyone's cup of tea. I can see why. But I thought it was utterly fantastic, and it has certainly earned a place on my favourites shelf - both virtually and physically.

This review was a ramble and I didn't really say much. But, whatever. I liked it. There you go.
La puntuación está entre 2.5 y 3 estrellas :).
rtc
The idea behind this book is grand. The fight for America's soul... as told by a foreigner (Neil Gaiman). Good characters all around, although I wasn't as tied to the lead as I could have been.
I read this book in two parts, up to Chapter 12 and then after 12. It was really good and I burned straight through it in two separate chunks. I'm still trying to sort out all the little nuances and I had to go and search for whom some of the gods were but it turned out to be pretty good in the end. I still think I liked the Graveyard book better but this is definitely worth a read.