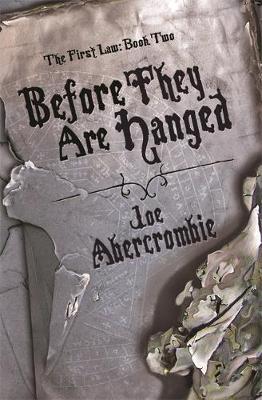 How do you defend a city surrounded by enemies and riddled with traitors, when your allies can by no means be trusted and your predecessor vanished without trace? It's enough to make a torturer want to run—if he could even walk without a stick—and Inquisitor Glokta needs answers before the Gurkish army comes knocking at the gates.

Northmen have spilled over the border of Angland and are spreading fire and death across the frozen country. Crown Prince Ladisla is poised to drive them back and win undying glory. There is only one problem: he commands the worst-armed, worst-trained, worst-led army in the world.

And Bayaz, the First of the Magi, is leading a party of bold adventurers on a perilous mission through the ruins of the past. The most hated woman in the South, the most feared man in the North, and the most selfish boy in the Union make a strange alliance, but a deadly one. They might even stand a chance of saving mankind from the Eaters. If they didn't have each other quite so much.

Ancient secrets will be uncovered. Bloody battles will be won and lost. Bitter enemies will be forgiven—but not before they are hanged.

This man,Mr.Abercrombie writes so well,it keeps me captivated from beginning to end.
What with the grisly fight scenes which are in part due to the world in which he created for them.And the characters he came up with,but the one that stands out and my favorite so far is Glokta Inquisitor/torturer.
- Funny/Sarcasm/Gallows Humor
- Characters are real, complex people with grey morality
- Character Progression
- Character Driven story
- Great Fight Scenes
- More background information/world building
- Good pacing and switching between groups and POVs.
- Plot Moving
- Plot not fully revealed
- More questions than answers
- Skips between three groups of characters, in three different areas, doing their own thing and going their own way
- There are obvious connects between the characters, but it's not obvious how they all fit in the big picture or how they are going to come together


I don't get a lot of the criticisms of this book. There were complaints of lack of world building and history in the first book, but people complain about it being in the second book. There's action and movement but it's not enough or where people want it to go. I think a lot of the problems this book runs into with people is expectations. The book doesn't follow point A to point B, where you know who to like, who to hate, what's going on and what to expect.

For characters, I love how realistic they are, how their actions make sense and how the author has gotten in their heads. It really does read how a person thinks. Despite what some people have said there are several likable characters, they just aren't plain good vs evil. Some are actually mostly good and quite likable personalities like Logan and West. Others don't have the most personable personalities but have redeeming qualities. Even if you don't like them they very least are interesting and usually funny.

It's true that most of the women so far have been victims of abuse in some form. It hasn't pinged on my radar though. It's been well handled and is quite realistic given the setting. It doesn't come off as convenience or the only way the author knows how to write a woman is as a victim. For instance, Eider is the leader of the Spicers guild. The only thing that's happened to her was being sold into marriage, which was the state for most women, and isn't bothered by it. She's prospered and been quite happy. I don't see her as a victim. She isn't rageful or broken.

An example of greyness for characters, there are several times it's been pointed out that while Bayaz certainly is trying to defeat the evil eaters, what he's trying to do is dangerous and may backfire to end the world. There's been hints of what's the real story behind Kahal, his dead brothers and his eaters, has Bayaz been lying about it? There's also hinting around Glokta being the hero for some women at times and with what side is he really on and what will he do once he finds out.

Which brings us to the expectations about the plot. We don't have clear answers and lots of questions about where the story is going. We don't know much, just like the characters we're following don't know much. I get that this can be frustrating, but I'm more intrigued. It makes me eager to ready the the third book to find out. I personally like how it's character driven. We found out things like they do, without the over done convenient cop out of detailed drawn out flash backs.

I'm personally in love with the series so far. I haven't found any plot holes like in the first book and didn't have a problem following when the author took a character to a different place/time without indication. The switching flowed much better this time around. There isn't actually anything I can say bad about the book. Sure there are things I wish the author showed and things that I didn't want to happen but those don't detract from the book. This book just isn't for everyone.

This book is more authentic than classical fantasy. You can see the dirt under the characters finger nails. The author tells you how bad they smell and information on pissing in the cold, instead of just skipping the realities of traveling in medieval times through the woods. The characters are just as grey and murky as the time they are living in. They don't know what's going on or who to trust so neither does the reader. Their thoughts read as thoughts, not lofty drawn out speeches. With everything up in the air, it reads a bit as a whodunnit mystery with a bit of dwindling magic during medieval times. There is plenty of movement and action, it's not as straight forward as hating Saron or the epic large scale battles in Tolkien.


I have a bunch of different quotes highlighted for this book. A lot are funny or need context to understand. I'm just going to pull out two quotes that have a bit of meaning and insight. It's a good snippet of information on how things work out in The First Law world.

"Strange how that had always seemed like good luck at the time. Sometimes it was hard to tell the difference. "

- Jezel whining on the journey to the end of the world. Rather insightful whining, if Jezel realized it, on how things turn. Good luck turned to bad luck, bad luck to good luck. You never know how it's going to turn. Former good things now you wished never happened and regret. Bad things you are now happy happened.

"On the contrary, nothing could be more natural. In my experience, people do as they are done to. You were sold by your father and bought by your husband, and yet you choose to buy and sell"

- Glokta, tortured victim turned torturer, talking to Eider, leader of the Spicer Guild on people and why he's turned out they he did.