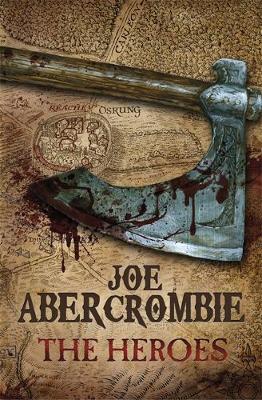 They say Black Dow's killed more men than winter, and clawed his way to the throne of the North up a hill of skulls. The King of the Union, ever a jealous neighbour, is not about to stand smiling by while he claws his way any higher. The orders have been given and the armies are toiling through the northern mud. Thousands of men are converging on a forgotten ring of stones, on a worthless hill, in an unimportant valley, and they've brought a lot of sharpened metal with them.

Bremer dan Gorst, disgraced master swordsman, has sworn to reclaim his stolen honour on the battlefield. Obsessed with redemption and addicted to violence, he's far past caring how much blood gets spilled in the attempt. Even if it's his own.

Prince Calder isn't interested in honour, and still less in getting himself killed. All he wants is power, and he'll tell any lie, use any trick, and betray any friend to get it. Just as long as he doesn't have to fight for it himself.

Curnden Craw, the last honest man in the North, has gained nothing from a life of warfare but swollen knees and frayed nerves. He hardly even cares who wins any more, he just wants to do the right thing.

But can he even tell what that is with the world burning down around him? Over three bloody days of battle, the fate of the North will be decided. But with both sides riddled by intrigues, follies, feuds and petty jealousies, it is unlikely to be the noblest hearts, or even the strongest arms that prevail.

Three men. One battle. No Heroes.


Again, this book has much of the great qualities in previous books. There isn't much change in the style, just more characters, more switching points of view and a very narrow time frame is seen. I was worried how well 600 some page book was going to deal with a 3 day battle. It's handled extremely well, though to clarify there is a bit of time told before and after the battle (and war) is over. I do continue to say that the trilogy and Best Served Cold is required reading to really understand this book. It maybe a stand alone but that doesn't mean it's going to work as well reading it out of the context of the world. In this case meaning without reading the previous books.

I love how the characters are handled. It's not a clear cut who to root for battle. All the characters involved on both sides are dynamic. I cared about all of them. Caring doesn't just mean liking or cheering for them. Caring about the characters means I felt something for them be it love, hate, anger, or disgust. I was intrigued and wanted to see how each character was going and ended up. There are some great characters in here and progression on all fronts. Character driven and progression is still the best things about these books for me. Their voices are unique and authentic, everything about their perspective is changed for each character so you really get a feel for them.

This book is funny. For the dark content is tone is very often light. Or rather, making light since the humor is often dark and grim like the content yet it brightens the book up quite a bit. It has sarcasm, mocking, gallows humor and jokes. What's the saying about men needing to make light of the darkest things? There's a real life phenomenon of hearing the funniest jokes at the worst crime scenes because it's the one of the best ways the cops deal with what's in front of them. You need to read the book to get it. I've laughed out loud at moments and smirked through passages. It's so hard to explain how a book about war that does just a great job on fight scenes is funny. There really isn't a funny thing I can pull out to demonstrate, it needs to be read in context. There are people close to me that find me very weird for laughing while reading this book because they haven't read it.

Abercrombie does an excellent job of switching perspectives and voices. I love noticing the different ways people view the same thing. It makes it intriguing and suspenseful. Little detail changes due to who's point of view we are reading is a joy to read. Absolute attention to detail about this. The fight scenes are as always very well done. The switching of perspectives in the middle of fight lends a new weight to it.

I do understand why we didn't get to follow Dogman and his dozen around, to build the suspense about the Bloody Nine, even with that, after the reveal it is still extremely disappointing. Even if we didn't get Dogman's narrating at least I wish we could have gotten more information, we didn't see much of the Dogman at all. This lack of Dogman perspective and information is really the only thing I find lacking in this book. (Of course, it's a minor thing and it could have a good outcome depending on how his next book goes.)

In a review for a different Abercombie book, I talked about wanting to see more about the North and where women stand there. I'm so glad this book shed a bit more light into it. It was awesome having Wonderful as a main force, kicking ass and holding her own.

The most unsettling part was what happened to Aliz or more accurately, what's assumed to have happened to her. Is she just left to Stranger-Come-Knocking? I don't see why he couldn't be forced to give her up in the negotiations now that Dogman's dead. Of course, it's far more realistic that she's left as a hostage. Obviously, taking the women hostage was completely realistic with having those women in the middle of a battle. If the women weren't killed or taken alive I'd have to call bullshit on the story, just leaving them alive in the wreakage doesn't work. None of this makes it any easier wondering what is happening to Aliz. I hope in the next book we get to see her fate and some awesome character progression due to what she's been through.


I find the only real solution to the Bayaz and the Prophet's conflict is for all of them to die in a fiery big ball of death. I hate Bayaz and want him dead yet I can't hope for that soon because who would kill the Prophet and his eaters? I know there is Ferro but can she kill them all including Bayaz? If the Prophet dies first who is going to kill Bayaz? The only option I see is they all die together or Ferro gets her vengeance. We know from Best Served Cold she's gotten at least one important eater but no other update.

One of the flaws of fantasy in general is how often no progress is made in their worlds. It's stuck stagnate in the middle ages no matter how much time passes or how many books, not even little progress is made. I love Brandon Sanderson for his thoughts on this and actively creating change in his Mistborn world. I also love Abercrombie for this as well. The progress is slow however it's being made and we've only been in this world for a decade. I look forward to reading how Abercrombie deals with progress, so far we've seen blasting powder, bombs and the first failing attempt at a sandwich, excuse me, cheese trap .


*sigh* I was so hopeful the North would end up free from the Prophet and Bayaz like Murcatto. Stupid Bayaz and chicken Calder. Maybe Calder and King Jezel can work some things behind Bayaz's back to at least do some good for the people if they can't slip from the First of the Magi's grasp. Dogman lost his dozen at the end so the Union hold is weaker since Dogman is weaker. I like Dogman, I really do. It pains me to have him aligned with Bayaz since I hate Bayaz. I really want Murcatto and Ferro to fuck their shit up and show them how to resist worthless masters.

Shivers: It took one book to mold him into a ruthless merciless killer and it clearly going to take more than one book to get more progress from him. There's a bit towards the end where he snaps his collar but he just changes masters. He's completely willing to murder his new master's brother to please him and asks repeatedly when he's suppose to do it. I guess if a dog is a good as his master, he's better off since his new master shows some mercy. Maybe Craw and Calder will rub off on him a bit but I'm doubtful. Especially since Calder has Shivers murder Reachy for "stirring the pot" and trying to kill Calder, so then Calder kills Reachy stirring the conflict between Reachy's dozen and Golden's dozen. It just goes in circles. "First we have it done to us, then we do it to others, then we order it done".

"He'd thought it through and this was the right thing to do. Or the least wrong thing, anyway. Sometimes that's the best you can hope for."

"Lending considerable support to the maxim that men always hate in others what is most hateful in themselves."

"Before you make a man into mud, his father had told him afterwards in his disappointed voice, make sure he's no use to you aline. Some men will smash a thing just because they can. They are too stupid to see that nothing shows more power than mercy."

"Men ain't just brave or not. It all depends on how things stand."

"The right thing's a different thing for every man."