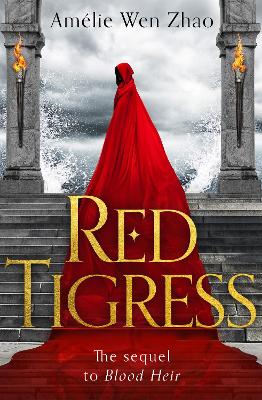 Fans of Children of Blood and Bone will love the sequel to Blood Heir. The second book in an epic fantasy series about a princess hiding a dark secret and the con man she must trust to liberate her empire from a dark reign.

Ana Mikhailov is the only surviving member of the royal family of Cyrilia. She has no army, no title, and no allies, and now she must find a way to take back the throne or risk the brutal retribution of the empress. Morganya is determined to establish a new world order on the spilled blood of non-Affinites. Ana is certain that Morganya won't stop until she kills them all.

Ana's only chance at navigating the dangerous world of her homeland means partnering with Ramson Quicktongue again. But the cunning crime lord has schemes of his own. For Ana to find an army, they must cross the Whitewaves to the impenetrable stone forts of Bregon. Only, no one can be certain what they will find there.

A dark power has risen. Will revolution bring peace – or will it only paint the streets in more blood?

Red Tigress is the second novel in Amelie Wen Zhao's Blood Heir Trilogy, and I have a confession to make: I'm already counting down the days for the next installment. It's that addictive.

Ana Mikhailov is the last surviving member of her family, the royal family of Cyrilia. She's gone through so much already in the hopes of taking back what is rightfully hers. And she has further to go.

With no army and little resources, Ana's best chance of defeating Morganya is to seek an alliance. Unfortunately, all of those options come with plenty of complications of their own—the sort of complications that can get people killed.

“She was Anastacya Mikhailov, blood Affinite and rightful Empress of Cyrilia. And she would fight for her people.”

It feels like I've been waiting an eternity for Red Tigress when it hasn't actually been that long in reality. It's just my impatient reader's mind speaking! That being said, this book was worth the wait!

Ana's story is one that captivated me from the very first moment. It feels both familiar and unique all at the same time, and I think that's one reason why I've been so curious to see where it leads. Okay, the infusion of magic certainly doesn't hurt anything!

Honestly, I just can't get over how wonderfully Amelie Wen Zhao has described this world. It feels real – the good and the bad, the beautiful and the horrifying. I just can't get enough of it or of the challenges that Ana finds herself facing.

I have to confess that there is one point in this story where I broke down and cried. I'm not going to tell you if they were tears of relief, or pure depression, because edges too close to spoiler territory! But I will say that clearly, Amelie Wen Zhao's writing got under my skin and forced a connection between me and this story.

Red Tigress is a fantasy sequel that I've been waiting for, and it sincerely did not disappoint. If anything, I found myself loving this novel more than the original (is that even possible??). I can't wait to see what happens in the final installment!

Thanks to Delacorte Press and #NetGalley for making this book available for review. All opinions expressed are my own.