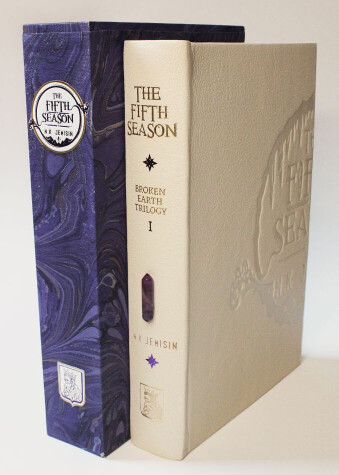 THIS IS THE WAY THE WORLD ENDS . . . FOR THE LAST TIME.
IT STARTS WITH THE GREAT RED RIFT across the heart of the world, spewing ash that blots out the sun.
IT STARTS WITH DEATH, with a murdered son and a missing daughter.
IT STARTS WITH BETRAYAL, and long dormant wounds rising up to fester.
This is the Stillness, a land long familiar with catastrophe, where the power of the earth is wielded as a weapon. And where there is no mercy.

For all those that have to fight for the respect that everyone else is given without question.

DESERVING OF EVERY SINGLE ACCOLADE

(please enjoy this short review while I recover)

Neither myths nor mysteries can hold a candle to the most infinitesimal spark of hope.

This book has been sitting in my Audible library for actual years now. I also had a physical copy at one point and even thought about buying a digital one, just to make myself finally read it. I have now read it.
It's been a long time since I read a fantasy novel like this.

The Fifth Season is the first of a trilogy, so don't expect a complete story here. It took me a little while to get into, because there is a lot of world building. The world of this story is not like our own. There is one single continent, full of "comms" that are settlements. There is also a caste system, and people are named by their function, like Strongbacks, or Leadership. And every so often there is a big enough "shake" to throw the entire continent into a "Fifth Season" -- a terrible time of struggle.

The story is centered around 3 female characters, all of whom are orogenes. Orogenes are people who can control the energy within the earth, and they are both used by the ruling class to control the shakes and keep things stable and reviled by those who are non-orogenes.

The first woman we meet is Essun, who has found her young son dead and her husband and daughter gone. We learn that she is an orogene, and so are her son and daughter. It's the discovery of this secret that has led to her son's death, and now Essun is determined to track down her husband and save her daughter.

Next is Damaya, a young orogene girl who has just discovered her powers and who is being given away by her parents to be taken to Fulcrum, the place in the Captial where orogenes are trained to control and use their powers.

Finally we meet Syenite, a young orogene woman of moderate power who has been told that she needs to have a child with a much stronger orogene, and therefore must accompany him on a journey across the continent as he goes on his next mission.

The stories of these three are woven together in a masterful way, until the last piece falls into place and you realize that what you've been reading is a real masterpiece. I look forward to continuing this story, now that my fantasy-reading muscles have been fully stretched!
I expected a lot from The Fifth Season. Not so much from this book, but from anything written by N.K. Jeminsin. I have heard a lot about this author and the depth of her worlds. I wanted a deep fantasy tale with characters that tempt you into their stories. I wanted a book that teased me never to put it down. The Fifth Season met my expectations.

There is some discourse about the actual genre of The Fifth Season. I’m going against the grain to say this feels more like science fiction than fantasy to me. First of all, it’s dystopia, which fits snugly in the science fiction parent genre. The other reason is the magic. It’s not so much magic as evolution. The Origins are fascinating, and the Guardians are too. Terrifying and curious. The way humans have been manipulated by both the earth and one another to adapt to the seasons is an interesting study in natural sciences and neurology. I suppose in many ways, it’s easier to think about the orogeny as a type of innate magic… but this is human evolution through-and-through. Very cool.

The characters here are so good. They’re faceted and growing. Kyanite is a particular favorite for me. The summary of this book as seen on Goodreads discusses Essun, but it was the Kyanite storyline who captured my heart. A woman who rises to every challenge with a complicated emotional response to almost everything. That said, all the characters are really fantastically written. Characters who pull my heartstrings and intrigue me pull me into a book more strongly than any aspect of worldbuilding and Jemisin’s subtle yet direct style of storytelling is incredibly good. Of course, those who have read the book will know exactly how cleverly done the POVs are, but I don’t want to spoil that here, because it was a complete surprise to me and I loved it.

The deeper I got into the book, the more and more engrossed I became. The action is subtle and the scenery is vast. Jemisin’s writing style is slow paced, but it never feels slow. Everything is so well-described, so well-explained, and to be completely honest, I’m excited to dig into The Obelisk Gate. The ending left us with so much possibility and a possible flip in world-view, and I’m … I’m just excited.
3.5 stars

Very interesting fantasy world that avoids a lot of the annoying tropes and pitfalls that the male-dominated fantasy canon often falls into. I really enjoyed how Jemison normalizes same-sex relationships, trans people, and non-normative family structures. It took me a while to get my bearings in this world, and this definitely felt like the first book in a series - setting the tone for more interesting action, with a lot of necessary exposition to situate readers in a completely different world. While this book is well-written and fully developed, I'm just not sure this series is for me, so I probably won't continue with it. I'd definitely recommend it to fantasy fans, but I don't tend to read much in the genre and with so many things on my to-read list I'm going to move on to things I'm more excited about.
Such a beautiful world Jemisin built. I want to dive deeper and Google some things, but I don't want to spoil the other books so I will try to be patient.
This novel leapt into a world so intricate and emotionally fraught, I wasn't sure I was going to like it. I won't spoil the horror of the opening scene, but it was hard for this parent to contemplate. I'm so glad I stuck with The Fifth Season. I will keep on thinking about the world Jemisin has artfully crafted and contemplating the ways it compares to ours. But right now I need to get my hands on the sequel!
I regret not having picked up Jemisin sooner.

What a book. Such good world building. And good writing to boot.
Oh wow, what to say about the Fifth Season?! This is a unique little gem that tells the story of a world tearing itself apart, where some have the ability to move the earth beneath them and things are far more complicated than they initially seem. It’s intricate and bizarre and so so good!

The story is told from three perspectives: Damaya, Syenite, and Essun. All three are women who are considered Orogenes, those that can feel the earth beneath them and manipulate it as easy as they breathe. Each of these perspectives is incredibly different in tone giving us a pretty wide view on what it’s like for an Orogene in The Stillness (the world they live in). Each of these women is at different stages in life with different connections, and it just adds so much to the story to see how each one responds to oppression, abuse, and family. It’s truly difficult to pick a favorite perspective because each one adds something vital to the story and they work together to create this much wider picture slowly but surely over time.

The style of the story is where I think most people will have issues, and admittedly I did at first when I attempted this solely in print. Essun’s perspective is told in 2nd person, which is something rarely attempted in books, and you are placed into her story directly. It’s kind of bizarre at first, but I think it served to really add a level of emotion that I’m not sure would be there otherwise. We get a sense of how orogeny feels and how Essun struggles with her personal identity and loss. There is also the matter of world-building, which is done based on what our characters know themselves with the rare exceptions of the interludes which give you just a touch more than you should know. As a result we don’t get a clear picture of the planet’s history and culture surrounding Stonelore, because most of the characters we spend a lot of time with either don’t know the answers or keep them heavily guarded. This reads like a post-apocalyptic book set on our own Earth, which is never explicitly stated but I think kind of adds a level of wonder to the story. How did it get to this point? Why has the world and it’s people changed so much?

The audio version of this book is absolutely excellent! While the print copy has a very helpful glossary of terms that I think is worth a little extra money to have on hand, I think the audio version is the way to go. Robin Miles the narrator, who I listened to for the novella Binti, does such an amazing job! She has an excellent range of voices and some fantastic pacing.

For a book that has such an iffy start it quickly became one I didn’t want to put down. I’m super excited to move onto The Obelisk Gate and see just where these characters’ stories lead us, because after the intense ending it would be impossible not to continue onward.
That was kind of what I thought was happening, but at the same time I am still very confused.