World After (Penryn and the End of Days, #2) 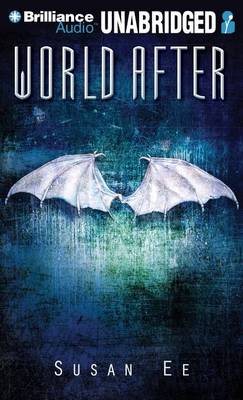 World After (Penryn and the End of Days, #2)

You know I’m always worried that Book two in a series won’t always hold up to the hype that is book one. But this one is amazing. We get more of Penryn and Paige. And I adore the flashbacks of Raffe. I actually dreaded finishing this book. I’ll be picking up book three IMMEDIATELY!!
Star Rating: —> 4 Stars

RTC !!! Onto book #3, End of Days !
That ending.. Wow.
Now that's more complicated Penryn is still dealing with the fact that her mother is unstable, that her sister Paige is messed up by the angels and that Raffe has left her to hunt for his wings and that everything is complicated.  The world is messed up, the angels and demons have plans that are going to make things way to messed up for everyone and many of the humans have not realised that this isn't something that they can ignore and hope goes away.

Penryn is strong but doesn't really realise it and there is hope for her and her family, she makes mistakes but owns up to them and the sword is subtly changing her.  I'm very curious as to what happens next.

Could be supernatural, demons, monsters (these angels are quite monstrous); diverse voices, terrifying women but I'm using it for Chilling Children for what's happening to Paige
I love that this series uses angels less as a symbol of traditional religious mythology, but more as supernatural creatures with their own motivations. And in this book, we get a lot of answers to questions from the first book, but also have all kinds of new questions. It isn't quite as action-packed as the first novel, but it is a powerful story nonetheless.

Penryn is such a fantastic female lead character. She is courageous and willing to do whatever it takes to save her sister, brave enough to take on anything and everything by herself if need be. The world is falling apart around her, but her determination to protect those she loves is her sole focus. And Raffe... moody and surly, but he is clearly the most noble of the angels. And he is surprisingly funny in a dry sort of way. I think that side of his character is a bit unexpected, given how intense he is portrayed to be.

This is a post-apocolyptic novel set in a world of chaos. It has all the makings of an intense read, with the various subplots that weave together to form this great novel. There are some emotionally charged themes and many of the characters have rather intense stories of their own. But there are some amazingly funny moments that bring a lot of life to the entire story. It is those moments that give the reader hope for the future of the world in these books and I love that side of humanity! There are some fantastic bits of dialogue that had me laughing out loud during an otherwise intense and serious read.

My Recommendation: If you like angel/human paranormal reads, then I highly recommend this one. The characters are tight and the storylines are engrossing! I gave this 4.5 mugs!
Darker and more twisted than Angelfall, World After took me into a very strange universe, in which Penryn had to prove herself again and again.

This and all my other reviews are originally posted on my blog (un)Conventional Bookviews
World After is a fantastic contribution to the Penryn and the End of Days series. Susan Ee shows off her writing chops by crafting a story that is exciting, moving, and dangerous even while the love interest readers have come to adore in the first book is absent for most of the plot. Although protagonist Penryn would love to have the protection of Rafe and his comforting presence, she shows she is more than capable of handling herself—and caring for her family—in a broken world.

The stakes for Penryn and her world are actually higher than ever in this installment. The resisters to the angel occupation thought they had pulled off a brilliant and devastating attack in Angelfall, but it turns out that they had destroyed very little and understood very little of the angels’ real plans. Penryn, Rafe, and the rebellion are suddenly faced with enemies more dangerous than before and prospects bleaker than ever. Ee keeps the story from becoming too dire, however, by using the dangerous to explore what it means to be a hero and if Penryn has to make the choice to act like one.

Penryn certainly grows along with her ever-growing responsibilities. She must tackle whether it is enough to save her sister, whether she should save everyone else as well, or if she even can. The other characters also get a lot of development in this book, however, including Rafe and Penryn’s mother and sister. Paige suffered terribly from the experiments performed on her in Angelfall, and coming back into human society may not be enough for her to recuperate. Penryn’s mother must come to terms with how much she, broken herself, can be held responsible for protecting her own daughters. And Rafe is still torn between obligations to angel commands and his own sense of ethics.

This means the romance between Penryn and Rafe is still up in the air, and I love it. Their relationship is not just frowned upon; it is absolutely forbidden, and consummating it in any way will have dire consequences. I love not going how this all will play out, and being torn between whether I should be rooting for them to get together, or hoping that Rafe should stay true to the commands from his God.

World After, all at once, is thrilling, romantic, and thoughtful. I can’t way to finish the journey with Penryn and Rafe in book three.


I picked up World After as soon as I could possibly get my hands on it after finishing Angelfall and wanted to yell at myself for waiting so long on this series! Angelfall left off in a very abrupt place, which would really make me mad if I had been reading this series as it was released. As it was, I only had to wait a few days to see what happened next and even that was torture!

This book gives so much more depth to the secondary characters than Angelfall did! Normally I don't care a whole heck of a lot about any characters other than the main one (or two), but this time I was really interested in finding out more about Penryn's mom, Paige, and even Beliel (don't judge me, I thought he was a really interesting character). I'm still not sure quite what to make of Penryn's mom. I'm still not decided on whether she's as insane as we think she is nor not... And poor Paige! I mean, I don't want to give her a hug, but... Suffice it to say I greatly enjoyed the characters in this book and was grateful to get to know them better!

Which brings me to Raffe and Penryn... If there's one thing that really drives me INSANE it's when the main love interests aren't actually together for most of a book. And this book did that. And I thought I was going to lose it (I survived). All of that being said, their reunion was so incredibly satisfying! I have nothing negative to say! I do have some questions about the logistics of the flying situation though.

World After took the story to a whole new level with the archangel schemes and politics. I really enjoyed the descriptions of San Fransisco in Ruins, especially since I was just there recently. I also LOVED the use of Alcatraz! That's a conspiracy theorists' dream! I mean, seriously, Susan Ee. You've outdone yourself with that one!

And then there's pretty much my favorite thing from this book:

I can't say much more or I might spoil the fun, but seriously. That ^ was awesome!

Overall, World After was basically amazing! I can't say it was quite as epic as Angelfall was, but it's still amazing enough to warrant a five star review! I am pretty much dying while I wait for the final installment of this series! I'm just glad I don't have long to wait!
This is somewhat of a hard book to review. On the one hand, it somewhat addresses my issues with Angelfall. On the other hand, it added a lot more issues. For example, I had a huge problem with the all-consuming haze around the motivation behind everything. Well, we find out more about that in World After, but at the same time, it also adds more plot elements that are left just as unexplained. And can I say that I still don’t really understand WHY and HOW the whole apocalypse happened?

Raffe was a pretty strong character in Angelfall. He was self-assured, confident, and independent. Okay well, in this book he flips between being a cold jerk and a lover. He was pretty hot and cold with Penryn, to the point where I got kinda irritated with him. I understand that he thought she died and that made him sad, but then he realizes she’s alive and like sort of treats her like extra baggage weighing down his crusade against Uriel.

Penryn, however, did become a much stronger character. She was already pretty badass from protecting her family, but she got an angel sword and it just intensified. She faced down a lot of scary shit in the name of her sister and I really respect that. One thing I think is important to mention is that she still showed a soft side for Raffe when they finally met up again. So sweet. :)

In other news that continues to scare everyone, Paige is still creepy as shit to read about. Ee does a VERY good job of describing her appearance and actions – so much so that I had to wiggle to the middle of my bed. I was honestly getting a little anxious just reading about her. There is still that hint of humanity shown to Penryn that keeps tugging at my heartstrings, so I’m curious to where her plotline is moving in the future.

Speaking of plot, this was a little slower than Angelfall. There wasn’t quite so much intense and frequent action, but more of slower character building and then some action at the end. I didn’t necessarily mind because I wanted to know the characters’ backgrounds a lot better. Here’s to waiting for book 3!
Initial thoughts: I liked Angelfall a slight bit better but World After still was very good. Somehow second books in dystopian trilogies seem to contain a lot of waiting. It's tiresome. It serves no purpose. I mean, yeah, books need time to breathe but if half the book is spent waiting for something, I'd expect the characters to stand out more. At least World After defies other clichés, such as the main character being the hero. Penryn wasn't the sole hero in this world and neither was she special compared to other humans. She did have her wits though.

Penryn and the End of Days (3 books)