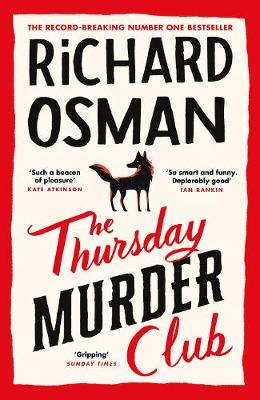 In a peaceful retirement village, four unlikely friends meet up once a week to investigate unsolved murders.

But when a brutal killing takes place on their very doorstep, the Thursday Murder Club find themselves in the middle of their first live case.

Elizabeth, Joyce, Ibrahim and Ron might be pushing eighty but they still have a few tricks up their sleeves.

Can our unorthodox but brilliant gang catch the killer before it's too late?

'As the bodies pile up, and more is revealed of the lives and loves of Joyce, Ibrahim, Ron and Elizabeth, you can't help cheering them on - and hoping to meet them again soon' The Times, Crime Book of the Month

'Mystery fans are going to be enthralled' Harlan Coban, Win

'One of the most enjoyable books of the year' Daily Express

'A beacon of pleasure' Kate Atkinson, Behind The Scenes At The Museum

'As gripping as it is funny' Evening Standard

'Funny, clever and achingly British' Adam Kay, This Is Going to Hurt

'A warm, wise and witty warning never to underestimate the elderly' Val McDermid, 1979

'Delight after delight from first page to last' Red Magazine

'I completely fell in love with it' Shari Lapena, Not a Happy Family

'This is properly brilliant. The pages fly and I can't stop smiling' Steve Cavanagh, The Devil's Advocate

'I laughed my arse off' Belinda Bauer, Exit

'A bundle of joy' Jane Fallon, Worst Idea Ever

I will admit that this book started a bit slow for me and between Joyce's diary and the other characters perspective it was a bit convoluted but then at some point, I just let that go and found it to be charming, funny and enjoyable. It is a bit far fetched that collectively they are smarter than the detectives and that the detectives would really be sharing evidence and exchange notes with them but once I let go of that, I enjoyed it for the characters. In the end, I found it to be a cozy, fun mystery and I wish Elizabeth, Joyce, Rob and Ibrahim were real people. I'd love to read more of their adventures.
British television presenter and producer Richard Osman wrote The Thursday Murder Club. He delivered a murder mystery that will delight cozy and crime readers alike.

Narrated by Lesley Manville, whose lyrical voice pulled me in from the opening scenes. The story begins when we meet newcomer and former nurse Joyce. She receives an invitation to join the Murder Club from retired DCI Elizabeth. Elizabeth provides the cold cases from her time in the field. It was fascinating seeing them go over files, hunt down leads, and call in favors.

From time to time, the group invite speakers to talk to the group from forensic scientist to the local police department. This is how they come to know PC Donna De Freitas, who is there to talk about scammers, locked windows and emails. She is taken by surprise when the group wants to talk about actual cases.

I loved the humor and diverse dynamics of the club. As we got to know them, the community and surrounds I began to feel like one of the group. Things heat up when the owner of their retirement development is found dead in his home with an old photo pinned to his chest.

This story was charming, and while it had a cozy vibe with its amateur sleuths and idyllic setting, things became more serious in tone when another murder occurs and they find human remains.

I must admit I became caught up in their lives and the investigation. PC Donna I think was taken aback by their investigative skills. Elizabeth was rather clever. The principal characters were quirky, unique and appealing.

Lesley Manville’s narration was delightful. I will continue this series on audio. Her voice and pacing enhanced an already charming tale, giving the characters’ voices that suited their personalities and amplifying the atmospheric and suspenseful undertones. This review was originally posted at Caffeinated Reviewer