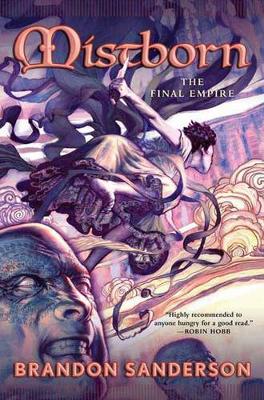 Kelsier recruited the underworld's elite, the smartest and most trustworthy allomancers, each of whom shares one of his many powers, and all of whom relish a high-stakes challenge. Only then does he reveal his ultimate dream, not just the greatest heist in history, but the downfall of the divine despot.

But even with the best criminal crew ever assembled, Kel's plan looks more like the ultimate long shot, until luck brings a ragged girl named Vin into his life. Like him, she's a half-Skaa orphan, but she's lived a much harsher life. Vin has learned to expect betrayal from everyone she meets, and gotten it. She will have to learn to trust, if Kel is to help her master powers of which she never dreamed.

This saga dares to ask a simple question: What if the hero of prophecy fails?

Mistborn probably has my favorite hard magic system of all time. The application of it and the potential for its uses are great. This book is a lot of the time marketed as a heist book, and while it does have those elements, its also not 100% a heist book, with elements of political intrigue, magic, and battle throughout.

I think Mistborn is a great entrypoint for the Cosmere and I would recommend it to anyone.
Star Rating: —> 5 Stars

This book, so entertaining. As I was reading the first part I kept thinking this seems so familiar. And then it hit me, it is a heist and several of the main characters specialize in their particular magic- not unlike Ocean's 11. Anyway. enjoyable book and I'm starting the 2nd now.

And to think I waited more than 18 months to read this!

You’re going to have to settle for ✨✨✨✨✨ bloody stars because goodreads won’t let me give you more than that.

Anyway, this review is going to be incoherent so try to stick with me here.

It’s taken me less than three days to read this and every second I spent away from this book (and there were many for all manner of reasons) was a second I wanted to crawl back to the comfort of its pages. It seemed that every time I had to put it down something was happening that I didn’t want to miss.

It’s no surprise therefore, that I took it upon myself to narrate the events of this book as they were to my younger brothers. They don’t read half as much as I do but the first response I got was “I’m raiding your bookshelf!” (they don’t know I don’t have a physical copy yet) but you can already tell what kind of story this is (and I suppose what kind of storyteller I am).

"You should try not to talk so much, friend. You'll sound far less stupid that way."

It’s already too late for that, dammit! Anyway, enough of that. Let’s get down to the real stuff.

The Final Empire is… well, it’s quite simply fantasy at its best in the modern age.

That’s it. I have nothing more to say. What can I say?

Well that was fantastic.

So straight away, this is a well written book. The names are a bit odd but whatever. A lot of authors aren’t good with names. Almost everyone had pretty decent nicknames though so it worked out. The style reminds me a lot of Dune. I mean there’s mentats and mahdi and houses and, ok those are the major parallels but they’re striking. I like the world, still, and the fantasy elements. And it’s fun to read something fresh that draws from less than typical sources and is also pretty original.

The writing is so accessible, it’s not as emotionally vibrant as typical YA but it’s engaging enough that you quickly fall into the story. And otherwise it pretty much feels like a YA book, maybe a bit edgier than some but not that far off from Six of Crows or Quitana of Charyn. Maybe it’s Vin’s age but I think more it’s the pace—this is a book that moves really well—and also how it dips into characters emotions and attitudes without dragging down the story. It’s a good balance.

Kelsier is a fabulous character. All swagger and cavalier foolhardy but with the skills to back it up. I love that character every time. And really I liked all the characters. They kept the story going and they kept it interesting beyond politics (which were really barely a thing) and beyond the heist (I know it was a rebellion but it really felt more like a heist).

And it was gratifying that I knew the bad guy’s secret. I didn’t see the two twists at the end so it was kind of fun to be both right and surprised. And it’s mildly heartbreaking and still fulfilling. Really good book.
Blog | Instagram | Twitter | Facebook | Pinterest | Youtube

I thoroughly enjoyed the audiobook. My only 'complaint' is the length. 24+ hours is quite long. I had to bump up the speed to make sure I could listen to it all before it was due back at the library. I really wish I had the time to savor it more.

The world building was top notch. I typically struggle with adult fantasy books but I was able to keep up with this story pretty well.
check out my booklr: http://thirtyfivebooks.tumblr.com

i'm honestly not sure how to review this, at least succinctly.

i've known of sanderson for a while - i own starters to three of his series - but this is the first work i've sat down and read. he enjoys a pretty positive reputation amongst fantasy fans, which is why i feel...conflicted.

see, this book DRAGGED. at ~640 pages, it is no small meal. i would say that for about 400 (nonconsecutive) pages i was waiting for it to get to a point, to lead somewhere, to hook me. i kept reading because a) i'm stubborn af, b) this is part of my challenge and one of my rules to myself was that i can only abandon one book and i didn't want to waste it on this, and c) i kept hoping it would get better.

and it did get better! i was really into the last 150 pages or so! so much happened (perhaps too much) and was revealed, i told myself "finally, this is what you've been waiting for."

besides the overall length (jfc man) and the lackluster parts in the middle, i also feel conflicted about the ending. no spoilers but, it seemed extremely convenient and somewhat OP in how it all turned out. i'm also unsure what this means for the second book...there are some loose ends but not....many? hmm.

will i read the second book? honestly...probably. i will at least buy it and try it out, but as long as it's not part of a challenge, i will permit myself to put it down if i feel that's best.

will i read more of sanderson? absolutely.

also...this is my first read book in my booklr challenge!!
I was in a reading slump while reading this book, so my star rating may be a bit more negative due to that. I honestly think I would have given it 5 stars if I hadn’t been in a reading slump.

The characters were amazing, the magic system was very unique and entertaining, and the world was definitely interesting. However, I was so annoyed by Vin’s romance. My girly and childlike side was like ‘awhh yess this is so cute!’ but my adult side was frustrated because I don’t believe that Vin would trust anyone that quickly and let down her guard after what she’s been through in life.

Also, the journal was interesting yes, but it took over half the story and it was so obvious for me that something happened to him and that he wasn’t the person who is the Lord Ruler at this moment in time. How could no one in this book think of that?

Besides this, the story was incredibly detailed with grey characters that felt absolutely real. I am curious how this story continues.
The Final Empire has been on my TBR for years, and it's always been one of those books that I look at each year and swear I'm going to get to...and then never do. Thank goodness for my book club, which voted for this one and effectively forced me to pick it up.

The Final Empire is very much a story about revolution and the machinations of an empire full of class & social issues that oppress some and elevate other; at the center of this Kelsier, a man determined to take the empire and right centuries of wrongs, and Vin, a girl who has grown up on the streets and finds she is more than she thought. This on the surface is your standard fantasy fight against oppression, but where it sets itself apart is Sanderson's excellent world building and incredibly unique magic system. I love love love the magic happening in The Final Empire! It'down s rooted in a person ability to "burn" metals, and from those metals, they gain abilities like super strength or heightened senses. The fights involving these powers were so cool, and I even had moments where I actually went back and listened to fights scenes over because I just needed to 'see' that happen again. I think the story overall is pretty interesting, with a lot of build up involving politics and careful maneuvering, but it does have some pacing issues that can be a bit disorienting. There were sections where the story slowed down considerably and while interesting didn't have a ton happening on the page.

Another thing that kept this from reaching that 5-star rating lies in the characterization. For the most part, I enjoyed the vast majority of the characters or at least their overall idea, but there were so many that I felt like I didn't quite 'know' by the end of it. This is a problem I was expecting though because there were similar issues with Elantris. There were two characters that I felt I grasped, Vin and Sazad, and they ended up becoming my favorites very quickly with Keilser close behind. It feels as if much of the effort of backstory was focused on these three, which means that many of the other crew while likable were sort of flat in areas. Sazad is an absolute stand out though, and I spent much of my time puzzling over him and his people. I love the uniqueness of his abilities and how his people value collecting knowledge, and I'd be lying if I said that part of the reason I'm so excited for book two had nothing to do with finding out more about him.

So overall, I found The Final Empire to be a really fun read and an excellent start of a series. I'm definitely going to grab the second book, The Well of Ascension because I can't wait to see where the story goes.
Reread: OMG HOW CAN IT BE SO GOOD?!