Breaking the Rules: A Coming of Age YA Romance (Pushing the Limits, #1.5) 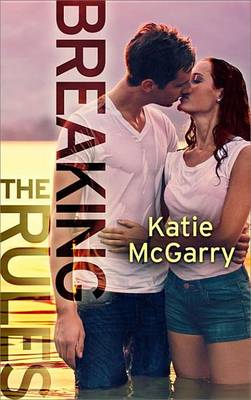 Breaking the Rules: A Coming of Age YA Romance (Pushing the Limits, #1.5)

"I wish life could be like this forever," I say.

For Echo Emerson, a road trip with her boyfriend is the perfect way to spend the last summer between school and college. It's a chance forget all the things that make her so different at home. But most of all, it means almost three months alone with gorgeous Noah Hutchins, the only boy who's never judged her.

But as their pasts come crashing back into their lives, its harder to hide that they come from two very different worlds. And as the summer fades, Echo faces her toughest decision - struggle to face the future together or let her first love go...

The Pushing the Limits Series

I was first hooked on McGarry's work via this lovely couple, and therefore, I am happy I finally read the second half of their story. Both Echo and Noah had a lot of baggage to unpack in the first book, and though they made progress, they were by no means, completely unburdened by their past. They had hope for the future, and in this book, we see them commit to moving forward and not letting the past define them. I will admit it was quite a bumpy ride, and even though I knew this would end well, it was touch and go for me, as I worried about the fate of this union. I was really surprised and pleased with the choices made for these characters, and I am glad I had the opportunity to see them grow and heal and reach for their happy.

BLOG | INSTAGRAM |TWITTER | BLOGLOVIN | FRIEND ME ON GOODREADS
I gobbled this book up within a few days, because it had me at Katie McGarry and she is definitely one of my absolute favorite authors. I'll read pretty much anything that she's written. So, stay tuned for a book review coming soon.
I had a hard time finishing Breaking the Rules. In fact, I was contemplating on DNFing the thing, but I hit a chapter where the story captivated me.

See, I’m not a fan of YA contemporary romance since they’re just too young for me (I know it’s a YA book) but Pushing the Limits was so good, I decided to read Echo and Noah story. This is the in-between story of what happened after they finished high school and before the events of the second book.

Breaking the Rules is indeed a story about coming of age. Especially between Echo and Noah. Both of these characters had a lot of baggage and really growing up to do and this trip really helped them in more ways than one.

I love Echo and Noah’s character growth. Both really needed growing up and reevaluating their relationship. As a lot of people have said, finding true love in high school isn’t as common as books may want you to believe it is. But it is possible to find THE ONE at such a young age. The one thing that I loved about Breaking the Rules was the uncertainty in Echo and Noah’s relationship. For a while, it did seem that they weren’t strong enough to overcome each of their own baggage, believe me, both had it in spades!

I love Echo’s arc, as well. She was still trying to deal with her brother Aires’ passing while also trying to prove that she is an individual artist and not just her mother’s daughter.

Noah, on the other hand, is trying to be the person that Echo deserves. He has dreams to go to college, be with his brothers and be with Echo. And also be a man that Echo is proud of.

It’s really interesting how these two solve their relationship struggle and it struck a chord in me. I do remember a time that having a relationship was just too full of uncertainties and I felt that this book showed a truth.

I loved that the events during this summer seem to point to a time where Echo and Noah will be in the future – TOGETHER. I think that this period in their lives will really result in an HEA. Yes, this book does end with an HFN. I wish that they had an epilogue set 10 years later or something.

Noah's situation still touches me in a way that I was ugly crying for most of his POV - especially his POVs in the last half of the book. Here are a couple of quotes that I could not help but highlight.

“You once hugged me like that,” Noah says. Moisture fills my eyes, and I blink it back. There’s no accusation in his voice. No anger. Just hurt. “I brought Isaiah to work on your brother’s car to impress you. You were dating that ape Luke again, and each time I saw you with him, it got under my skin. When Isaiah told you that he could get it running and you hugged me…” Noah trails off, and I close my eyes, permitting the sweet memory of that day in the garage to caress my skin. “I didn’t understand it at the time, but I loved you then. I fell for you the moment you called me out in the guidance counselor’s office, and I’ve been yours since.”

"Echo’s finding where she belongs, and it’s not with me. My problem—I don’t know how the hell to be man enough to let her go. Loving her like I do, I don’t know how I can keep her."

I definitely recommend reading Breaking the Rules right after reading Pushing the Limits.This review first appread on I Heart Romance & YA

Twitter || Blog || Pinterest || Tumblr || Instagram || Facebook
I've been waiting SO long for this book. All of Katie McGarry's stories have moved me to tears, and while I loved all of them, Echo and Noah have remained my favorite couple, so I was so excited to read this book. I was not disappointed in anyway. It was well worth the wait! The interview and playlist at the end were also great.