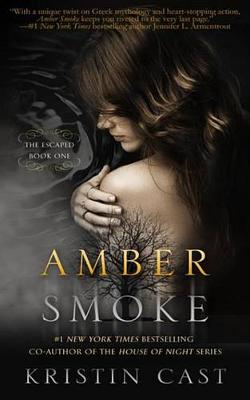 
"With the perfect mix of thrills and chills, along with characters who pop off the page and a gripping plot, this explosive new series is perfect for any Hunger Games and Divergent fans."-RT BOOK REVIEWS


The door to the massive New York Times bestselling HOUSE OF NIGHT series has closed. Now, Kristin Cast kicks down a new door to welcome her millions of fans to her latest sizzling series.


There is a world that runs parallel to our own, a world in which the souls of the damned are caged, where they are looked over by the Furies, and where they spend eternity in torment, mirroring the devastation and mayhem they created when alive.


Someone has opened the cage.


The worst of terrors has crossed the barrier that separates our world from theirs, and the Furies send a great, albeit untested warrior-their only son, Alek-to try to bring those souls back. He is young and handsome, headstrong and impulsive, and he won't be able to do it alone.


Eva has grown up, beautiful and beloved, but surrounded by secrets. First, she will be hunted in an ancient feud that will threaten her life. Then, she will become the hunter.


With the police closing in and two worlds on the verge of crumbling around them, Alek and Eva must find each other, discover the limits of their powers, and work together to save everything they hold dear, including one another. Blending elements of mythology with the dazzling storytelling that her fans have devoured through the HOUSE OF NIGHT series, Kristin Cast weaves a spellbinding and passionate tale that starts a thrilling new series with an explosive charge.

REVIEW.
So this is the first part in the new series The Escaped by Kristin Cast. Familiar name right? That’s because she is one of the writers of The House of Night series. A series that I read years back, and stopped after book 5. I thought things happened to fast and it made it to unrealistic to continue.

So a new series from an author I’m not overly happy with is always a guess.. But who knows? I am all for second chances.

But that second chance seemed overrated after the first chapters. I had a lot of annoyances and the main characters seemed rather stupid. If you’ve read any of my reviews before you know how much I hate stupid people, I just.. Can’t.
So I leaned more towards DNF with this book.. but since it was only 275 pages I wanted to continue. Even though I was annoyed, I like the way she writes. I flew through the pages and in no time did I finish this book, maybe even within 24 hours?

So the story itself is not very original. The whole Greek thing with Fury’s and Oracles has been done so many times now.. But I don’t know, it did have something that kept me going. It had this creepy feel to it sometimes, with some gore and nasty stuff that made it a bit different form the standard YA novels.

I do have a bit of a weak spot for mysteries.. and even though this is mainly a fantasy novel, it had a lot of mystery elements in it with the murder complot and the police being involved.
That was, for me, one of the plus sides of this book. Eva was not the only narrator, but also our immortal hero Alek narrated, and the police as well ! This gave us a well-round view of the story and the different sides to it.

I don’t have much to say for the characters, because well.. not much character development there. Everyone was very shallow, and kind of stupid..

Eva did so many things wrong that I wanted to shake some sense into her many times.. When there is a killer on the loose in your town you don't park your car in the middle of nowhere in the dark and wander around alone. That is just asking for it. T
he same with when she is wanted for murder, she just goes out in public and expects no one to recognize her. Especially in your own town ! Of course they are searching for you !!
And when a guy who barely has noticed you in the last couple of years suddenly asks you up in his hotelroom with some lame excuse has other motives !! I mean.. DUHH.

One of the other things that really bothered me was that she called her mother by her name the entire time. Sometimes I get it, when you're not very close to your parents and want to create some kind of distance. But she and her mother are very close, so why not call her mom??

Alek was a very lame excuse of a Immortal warrior. He was just pathetic.

FINAL THOUGHTS.
Even though the plot was not deeply developed (things stayed mainly to the surface), it was still a nice read and I enjoyed reading the plot mostly. You should not expect too much from it, but it was a nice read in-between. So I would like to give this one 2.5 Freyja’s and well, you should make up your own mind about wanting to read this one or not.