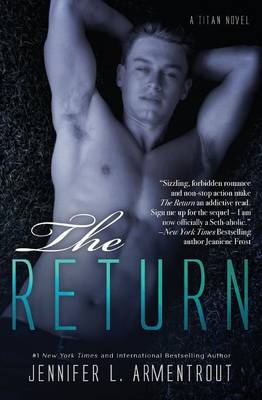 The Fates are cackling their bony asses off...

It's been a year since Seth made the deal with the gods that pledged his life to them. And so far, the jobs they've given him have been violent and bloody--which is kind of all right with him. But now Apollo has something else in mind for Seth. He's got to play protector while keeping his hands and fingers off, and for someone who really has a problem with restraint, this new assignment might be the most challenging yet.

Josie has no idea what this crazy hot guy's deal might be, but it's a good bet that his arrival means the new life she started after leaving home is about to be thrown into an Olympian-sized blender turned up to puree. Either Josie is going insane or a nightmare straight out of ancient myth is gunning for her.

But it might be the unlikely attraction simmering between her and the golden-eyed, secret-keeping Seth that may prove to be the most dangerous thing of all.

Because history has once again been flipped to repeat.

I loved “From Blood and Ash” by Jennifer Armentrout so I was excited to jump into one of her other series. I’m really into the modern day spin on Greek mythology lately and the “Titan” series is just what I wanted! The cover of this book is a little ridiculous . . . But that didn’t deter me!
I kind of unsure what to think of this one.. I really enjoyed The Covenant series and I've been wanting to read this series because of Seth for a long time.
But it has been on my Kindle for ages, and I started reading it a long time ago.. Every now and then when I did not know what to read I picked up were I left with this one but it never took. I don't know, it just wasn't as interesting as I thought it would be. I knew it would be much more NA and I really liked reading about Seth, and Josie was a cute girl too !! But I found it kind of boring and like the book was way too long? Even though it was not that long.. I don't know, I'm just not very enthousiastic about it. Should I even continue with it? *sigh*...
A spin-off to the Covenant series, this next trilogy focuses on Seth as he works with the gods to help restore balance to the world after several titans are freed.

I really loved learning more about Seth. He was one of the more intriguing characters from the previous series. I also enjoyed the secondary characters, although the majority were characters from the previous series. However, I struggled to really love Josie. It's not that she is a poorly written character, it's that she reminds me so much of other female characters in past JLA books. I didn't feel anything really set her apart, particularly from Alex in the Covenant series.

I absolutely loved the setting. I don't know what it is about Greek mythology, but it gets me excited every time. The plot hooked me completely as it explored the titans and demigods. I'm less excited about the turmoil between the full bloods and half bloods, although I do appreciate her intertwining the past narrative with the current narrative.

tl;dr Really interesting plot and mostly enjoyable characters adapt to the events from the previous series.
This was fun and I am looking forward to the next one.
Ha ha. So... This book was about Seth and Josie acknowledging they're into each other, yes?

Seems legit to me.