Valour (The Faithful and the Fallen, #2) 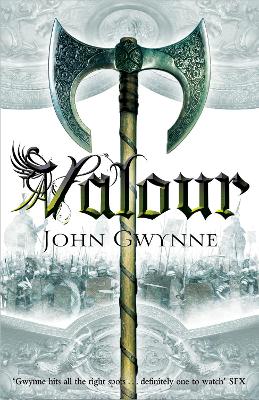 Valour (The Faithful and the Fallen, #2)

The Banished Lands are torn by war as the army of High King Nathair sweeps the realm challenging all who oppose his holy crusade. Allied with the manipulative Queen Rhin of Cambren, there are few who can stand against him. But Rhin is playing her own games and has her eyes on a far greater prize ...Left for dead - her kin have fled and her country is overrun with enemies - Cywen fights to survive. But any chance of escape is futile once Nathair and his disquieting advisor Calidus realize who she is. They have no intention of letting such a prize slip from their grasp. For she may be their one chance at killing the biggest threat to their power. Meanwhile, the young warrior Corban flees from his conquered homeland with his exiled companions, heading for the only place that may offer them sanctuary. But to get there they must travel through Cambren, avoiding warbands, giants and the vicious wolven of the mountains. And all the while Corban struggles to become the man that everyone believes him to be - the Bright Star and saviour of the Banished Lands. Embroiled in struggles for power and survival, the mortal world is unaware of the greatest threat of all.
In the Otherworld, dark forces scheme to bring a host of the Fallen into the world of flesh to end the war with the Faithful, once and for all.

This was seriously one of the best books I've read this year!
I thought Malice was good; too tropey at times, but still very entertaining. Valour is even better!
I couldn't put it down from start to finish: a lot happens in this book, many people die (WHY ALWAYS MY FAVORITE???) and we encounter great new characters.
I wasn't Corban's fan while reading Malice, but this time I liked his chapters the most: every POV is vital to see and comprehend the bigger picture, but Corban is the core of everything and it's always very interesting to see his journey and his acceptance of who he really is and what he needs to do in order to keep whom he loves safe.
Another thing I greatly enjoyed were the female characters: Coralen is my new favorite person ever and I want her to be queen of everything (if she ends up dying I will throw a tantrum), Cywen is always so cool, Fidele is everything a royal should be.
So yeah, this book is awesome.
Now I'm looking forward to seeing how Nathair's story will progress in Ruin... I don't think he is a bad guy, he's just really gullible and has a shitty taste in friends.
Veradis is still one of my fave but he really needs to make up his mind (and I still ship him and Nathair together, they would be a perfect power couple).
Maquin... his story was kinda predictable but I enjoyed it anyway.
And sooner or later some bad guy will die too. I feel it.
And I want to be a Jehar. They're soo cool!!
I love this series so much and I just can't even believe all the things that have happened. I really hope my ship sails in the next book.
Nope, didn't care. Will not be continuing, it gets a 3* because it was readable but it just didn't do it for me.

And the Giants old language, that was Irish. Oh heck. You can't translate one language into another directly, it doesn't work right. Let me explain with an example, the Irish proverb: "Aithníonn ciaróg ciaróg eile" transliterated it's "Knows beetle beetle other" properly translated it's "It takes one to know one" or "Birds of a feather flock together". However Gwynne took what he wanted to say in Irish and translated it directly from the English. This is cultural appropriation at it's laziest. It's not like there aren't folks who would do the translations for a mention.

Thankfully this was rare in this book. However the action was divided among several different characters, many of whom had similar names, all racing to let the chosen one do what he had to do. Many people died, but I didn't feel that I knew them well enough to care.

Don't think I'll be continuing with this series.

The Faithful and the Fallen (4 books)