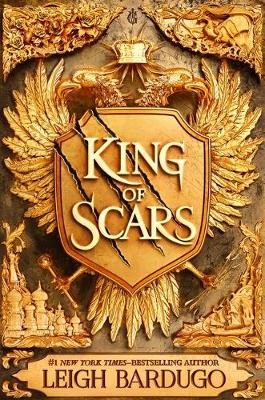 Nikolai Lantsov has always had a gift for the impossible. No one knows what he endured in his country's bloody civil war - and he intends to keep it that way. Now, as enemies gather at his weakened borders, the young king must find a way to refill Ravka's coffers, forge new alliances, and stop a rising threat to the once-great Grisha Army.

Yet with every day a dark magic within him grows stronger, threatening to destroy all he has built. With the help of a young monk and a legendary Grisha Squaller, Nikolai will journey to the places in Ravka where the deepest magic survives to vanquish the terrible legacy inside him. He will risk everything to save his country and himself. But some secrets aren't meant to stay buried--and some wounds aren't meant to heal.

This book is so great!!! I loved seeing all the characters!!!

King of Scars is the first in a series of the same name, but it is also part of Leigh Bardugo's larger world, the Grishaverse. That makes it the sixth novel in that series, and I sincerely recommend that all potential fans read them in that order (it'll make more sense this way, and increase your overall appreciation – I promise!).

Nikolai Lantsov is the new king of Ravka. He's the king they deserve, even if not everyone can actually agree on that count. However, in order to continue protecting Ravka, he needs money, and he needs allies. And fast. A challenge made a bit more difficult by the dark curse coursing through his veins. He'll go to the end of the earth to find a cure, as would any of those loyal to him.

Meanwhile, many other Grisha are still active in their own wars. Nina has taken a job as an undercover agent, doing everything she can to save Grisha in neighboring (and less accepting) countries. She's not the only one doing her part.

King of Scars was a seriously amazing read, one that sucked me in right from the start. Then again, since this is the sixth book in the world/series, it's pretty safe to say that I'm already very strongly invested in what is going to happen.

That being said, it's been a long time coming, getting to see a plot from Nikolai's perspective. He was one of my favorites in the original trilogy, and my heart soared to learn of his stories continuation here. Even if that meant he was going to go through some pretty horrible things in the process.

“The monster is me and I am the monster.”

Also, can I just take a minute to gush about how pretty King of Scars is? The dust jacket, the cover, and even the chapter headers are all absolutely stunning. They show a serious level of attention to detail, and it gives off such an elegant appearance.

Anyway, moving on. The main perspectives in this novel (Nikolai, Nina, Zoya, and a couple other surprises along the way) are pure perfection, as always. Nina's was a familiar voice, while it was fascinating to finally see how Nikolai and Zoya thought and felt. It was, simply put, illuminating.

For me, one of the many highlights had to be the world, as always, and the politics it brought with it. Nikolai is not in an easy situation, and Leigh Bardugo did a delightful job of laying out all of the complications for him, as well as for all of the others.

“It's not exciting if nothing can go wrong.”

I did it! I finally caught up in the Grishaverse novels! Only...now I almost feel like I don't know what to do with myself. I still have months to go before the Netflix series releases, and yet I want more of this world. At least I still have some of the short stories to enjoy.

Also! We're only a couple of months away from Rule of Wolves. Who else is counting down the days at this point? It's going to be another breathtaking read, I'm certain of it.

oh.my.FUCKING.GOD.im.dead
When I started reading King of Scars I was very excited and my excitement was assured at the start of this book! The writing was amazing as always and there was quite a story to be had with many great characters. Buuuuut I wasn’t thrilled with the pacing. It didn’t keep my interest the entire time and really slowed down in the middle of the book. The ending was a twist and that was interesting. Overall though, I wanted more feels and emotion which just wasn’t in the cards for me.
4,5*

HOLY
F*CK
Not as awesome as Six of Crows but still highly entertaining
I loved this book so much! I loved being back in the world and I loved the characters. This was such a good read that gripped me right away. I'm excited that there's going to be another book!
Well that's not where I saw this book going. Fantastic!
Just one loud, long scream.

I didn’t think it was possible to get me to like Zoya, but she did it. And I have to say it’s a little bit Harry Potter/horcruxy and I’m not sure what I think about that. Except that I’m sure it will be interesting and exciting in the next book.

I do like Ravka better than Ketterdam and so this book was...oddly comforting... interesting.... fun. But, I mean, with Nikolai how can it not be? It’s every bit as amusing and witty as I could hope for.

REREAD: There are parts, much like Crooked Kingdom, where I just wanted it to move faster; to get to the action. Through a lot of the first and second act. I liked Nina’s story better the second time around, after it really git going. But it was slow going in the beginning too. Having just read the Crows book, I’d liked what she learned from Kaz and carried into this story. And I liked Nikolai and Zoya, their banter and their moments, and just Nikolai. But that’s the slow rolling story that I would have liked to trim or fast forward in a few places.