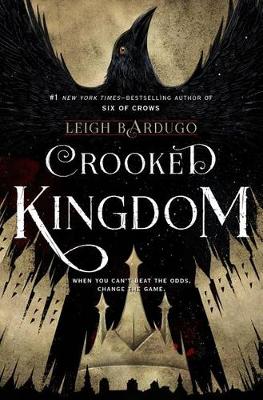 Welcome to the world of the Grisha.

Kaz Brekker and his crew of deadly outcasts have just pulled off a heist so daring even they didn't think they'd survive. But instead of divvying up a fat reward, they're right back to fighting for their lives.

Double-crossed and badly weakened, the crew is low on resources, allies, and hope. As powerful forces from around the world descend on Ketterdam to root out the secrets of the dangerous drug known as jurda parem, old rivals and new enemies emerge to challenge Kaz's cunning and test the team's fragile loyalties.

A war will be waged on the city's dark and twisting streets - a battle for revenge and redemption that will decide the fate of the Grisha world.

As gripping, sweeping and memorable as the Grisha trilogy - SHADOW AND BONE, SIEGE AND STORM and RUIN AND RISING - this novel is perfect for fans of Sarah J. Maas, Laini Taylor, Kristin Cashore and GAME OF THRONES.

Winner of the Teen Choice Book Award for Book of the Year.

I'm not sure I'll ever get over this duology. It was better than good.
I love the Six of Crows series, it's the series that introduced me to Leigh Bardugo's work, so it has a special place in my heart. And will probably re-read it over and over and over again! Can't wait for book #3 to be released, although Leigh Bardugo said it won't be for a while... Hopefully, we have the Netflix series too....
Ever feel empty after reading a good book? That is how I feel right now. I feel like I lived a whole life that I have to leave behind right now. This duology is absolutely worth the hype that surrounds it.

Guys, the hype for Crooked Kingdom (Six of Crows #2) is real – and it is deserved! This novel is everything I had hoped it would be, and then a whole lot more. It concludes this duology, but it does so with a bang. Also, thankfully it is far from being the end for this world.

Kaz Brekker is a prodigy when it comes to crime, so it's no surprise when he talked his crew into the most dangerous of heists yet. And then succeeded in doing exactly what he came for. Unfortunately, that success only succeeded in bringing more trouble his way.

They should have gotten a reward for their efforts. Instead, they're fighting for their lives. Literally. It'll take their combined knowledge and abilities in order to survive the storm that seeks to break them. No Mourners. No Funerals.

“Fear is a phoenix. You can watch it burn a thousand times and still it will return.”

As much as I enjoyed Six of Crows, I loved Crooked Kingdom ten times more. It was SO intense and thrilling. The stakes felt higher than ever, and the planning was so sneaky and entertaining to read.

Not to mention all of the individual character plot points, development, and romantic tension that was found almost all over the place. No wonder I enjoyed this read so much. This is a book that raised the ante, and it worked.

Seriously, it isn't every day that I find myself enjoying the sequel more than the original. Yet that is exactly what happened here with Leigh Bardugo's work. It's freaking amazing. And it admittedly is making me all the more excited about the latest book she's hinting at (an untitled book three?).

“Crows remember human faces. They remember the people who feed them, who are kind to them. And the people who wrong them too. They don’t forget. They tell each other who to look after and who to watch out for.”

The main plot is perfection – full of high stakes, personal cost, and development. But if you ask me, is the secondary plots where this novel really shines. The tension between so many of the characters, what they personally had to go through. All of it. It made them feel so blindingly real, and thus made their struggles carry weight.

Plus, let's be honest here: the romantic subplots were pretty amazing. I'm not one to latch on to those plots all the time, but I really did here. I imagine that my ships are pretty standard for this series, but I'm totally okay with that!

Long story short: I seriously loved Crooked Kingdom, and would give anything to have the ability to keep on reading. Please, write more, and soon!

That I read this book in under a month should say something about how much I enjoyed it. I loved every second of this book and I can't wait to continue.
Reread 2020: Why does it hurt so much?!

Leigh Bardugo broke my heart into a million pieces and put it back together again in just over 500 pages.
Recensione pubblicata originariamente sul mio blog Arte della Lettura

I read Crooked Kingdom by Leigh Bardugo because Lex had finally talked me into reading Six of Crows and I naturally had to see what happened next. Once I was done reading it I had to talk this one out with her. I really wasn't sure how I felt about it. Talking it out really did help.

Here's the thing: Crooked Kingdom is a good read. I enjoyed it but.....the pacing was just really weird. You would think "Okay here's the thing that they have to do and/or overcome. Then they'd do and/or overcome the thing within 50 to 100 pages and you've still got a whole lot of book to go. Repeat that like five or six times. It was a bit confusing if I'm being honest.

I had seen a Tweet that had sort of spoiled one aspect of this book for me. I'm not mad about it as it's been years since the book was published. Because I saw that Tweet I was somewhat prepared for it. I knew what would happen, I just didn't know who it would happen to. I'm not going to lie, I was pretty gutted over it. I also don't care that it was setting up another story.

I felt that too much worked out well for the characters...too many miracles and that's because of what Bardugo chose to show the reader and the pacing. It was because of this that I chose to remove a whole star. It really reminded me of Ocean's Eleven with the show and tell session after the heist. For me personally it worked really well in movie format but not so much in book format. I think it is an easier thing to track visually than to absorb in a book.

Crooked Kingdom was still a great read. There were times when I had to stop my audiobook because I just couldn't handle anymore suspense. The narration was fantastic! I loved that they had a full cast of characters. It helped keep things straight from all the different points of view. I'll continue to read Bardugo. I'll probably go back and read the first trilogy now before continuing with the story. I'm happy to have had more time in Ketterdam with Crooked Kingdom.
Boy, this did not disappoint. It's taken me when feels like weeks to read it because my reading mojo has just left the building recently, but wow. This was all kinds of epic - there is never a dull moment in this novel and there are so many unexpected twists and turns you can barely breath. Suffice to say, it's sad as well. I knew something was going to happen, from Twitter, but nothing else and it still felt like a gut punch. I am now very happy to be able to read King of Scars because Nikolai is my absolute fave.

Knowing what I do about this story and these characters it shouldn't have surprised me at all that this book was darker than Six of Crows. And yet it did. I mean hands getting chopped off and people dying and it's just well it's a little dark.

It's also not quite as clever as one would hope. Because the whole third act I didn't trust because I knew there was something else going on, expecting that everything wasn't as it appeared and therefore not surprised with the reveal.

And yet, falling short of expectations doesn't make it a bad book. It's still got really great characters. And it has Nikolai! That's almost enough right there. Still, I simply liked the first one better.

REREAD: The thing I realize on reread is that the twists are fun but since they're expected there were parts of the story I wanted to skip through to get to the parts I was looking forward to. And part of that is that it focuses a little more on characters I find less interesting. It seems like just a bit too much book for what it needed to be. And I just kept waiting for the part with Nikolai and I realize it’s not his story, but I still wanted more. Plus Matthias really didn't need to die.   It takes its time to end well and not rush through the resolution which I appreciate.