Ashes of the Sun (Burningblade and Silvereye, #1) 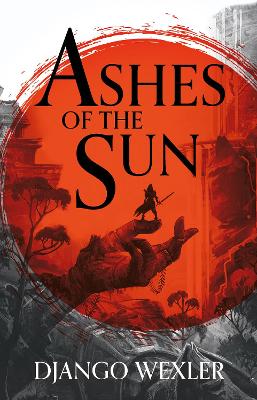 Ashes of the Sun (Burningblade and Silvereye, #1)

'Ashes of the Sun is fantasy at its finest' Nicholas Eames, author of Kings of the Wyld

Four hundred years ago, a cataclysmic war cracked the world open. Amid the ashes, the Dawn Republic now stands guard over lands littered with eldritch relics and cursed by plaguespawn outbreaks. But a new conflict is looming and brother and sister Gyre and Maya have found themselves on opposite sides of it.

At the age of five, Maya was taken by the Twilight Order and trained to be a centarch, wielding forbidden arcana to enforce the Dawn Republic's rule. On that day, her brother, Gyre, swore to destroy the Order that stole his sister... whatever the cost.

Twelve years later, brother and sister are two very different people: she is the Twilight Order's brightest prodigy; he is a thief, bandit and revolutionary. Together, the siblings will discover that not even ties of blood will keep them from splitting the world in two.

Praise for Ashes of the Sun:

'Wexler's best work yet... Ashes of the Sun has scale and pace, and tension and batshit cool scenery, and I enjoyed it a hell of a lot' Tor.com

'Wexler is a master of high fantasy' S.M. Stirling

I'm officially a Django Wexler fan! This was my third book by him and I've adored them all.

Ashes of the Sun is very Star Wars-esque, but still with plenty of unique qualities. I loved our two main characters (brother and sister). I'm a big fan of the while “opposite sides of a war” plot point.

Looking forward to the rest of the series!

I received this book for free from NetGalley in exchange for an honest review. This does not affect my opinion of the book or the content of my review.

Ashes of the Sun is the first book I’ve read by Django Wexler, though admittedly I own another of his novels and just haven’t gotten around to reading it yet--famous last words. I must say that I really enjoyed Ashes of the Sun. The characters were well developed, there was diversity, creepy villains, and plenty of world-building. I also loved the conflict between brother and sister and their ideals, something I wanted in Ranger of Marzanna, but didn’t get, and frankly, much of the novel was reminiscent of facets of Star Wars, from the basic struggle between good evil, to world-building, and the character relationships.


The story begins on a farm in what seems almost like a post-apocalyptic world, after a war between The Elder races (ghouls and The Chosen) almost destroyed it with their astonishing powers. Before being wiped out after the Plague Wars, The Chosen, who had powers beyond any mere mortal human, established The Twilight Order, to allow humans to use deiat to protect humanity and civilization after their passing. Think of this Twilight Order as the Jedi Order, its  most powerful warriors (known as centrachs) as Master Jedis, their trainees (called agathia), as padawan. The centrachs and their agathia wield lightsaber-like weapons, known as Haken, that is powered by Chosen arcana. Only humans capable of drawing on deiat, or the force, can use this power. It’s also worth noting that the Twilight Order is part of, and defends, the Dawn Republic, which has its own forces. Hopefully, if you’re a fellow Star Wars fan, this explanation simplifies matters for you.

“Jaedia had once described plaguespawn as the product of a mad taxidermist, given the run of the contents of a butcher shop and a morgue. That was close, but Maya thought that no human mind, however mad, could have matched the awfulness of the real thing. And despite all its deformities, the thing functioned.”

Centrachs, though they have to report to the Council of Twelve (Jedi Order), roam the realm fighting plaguespawn, and hunting down dhak (illegal arcana) and dhakim (humans who use ghoul magic, can control plaguespawn, and are mostly insane--think the Sith). Regular people mostly live underground or in cities with extremely high walls, to keep out plaguespawn. Plaguespawn are disgusting creatures of unknown origin, that take apart other creatures, mash their bits together and use them as their own body parts. They’re disturbing, promising a painful death to anyone who falls victim to them,  and I wouldn’t want to encounter one either.

“‘I’m not stupid,’ Gyre muttered. ‘If the order saved her, then she’s been living with them since she was five years old. That’s plenty of time to get their hooks into her….Nothing’s going to fix my family. I just don’t want them to break anyone else’s.’”

Despite the fact that the centrachs fight off these creatures, many of them have become arrogant, and are a source of fear for normal citizens. This is evident for the very beginning of Ashes of the Sun, where a family of farmers is ripped apart forever by a visiting Centrach who is supposed to help cure a young girl. The daughter of the family, Maya has been plagued by bouts of sickness and the Centrach is to take her to the Order for a cure. Afraid, she cries out for help from her parents, who know they can’t resist. It is her brother, Grye, who stabs the Centrach to protect his sister, only to lose an eye as recompense. Not too long after, he lost both his parents too.

“But there will come a time when you have to hurt someone--even kill someone--to protect the rest, whether or not they deserve it. When that day comes, you’ll understand why we have to hide so often. The Order does what must be done, and it does not win us many friends.”

Ashes of the Sun does a great job on focusing on the ideological differences between brother and sister. As Maya was taken when she was merely five years old, most of her life has been spent as agathios in the Twilight Order, with her Centrach instructor, Jaedia being the closest thing to a mother she can remember. Her brother, Gyre, plagued by guilt and hatred for the Order that stole his sister away, becomes a rebel, who will seek to destroy the Order at any cost. Author Wexler does a great job of making you see why each character believes the things that they do, and makes you sympathetic to each of their causes--even though they’re in direct conflict with one another. As such, each of their meetings between brother and sister are fairly tragic and charged with emotion. Although this sibling rivalrdy didn’t rip me up like any of the tragedies in Star Wars, such as Luke and Darth Vader or Anakin and Obi-Wan, it still was pretty well done. I thought Ashes of the Sun would drag out their meeting much longer, but the two siblings reunite pretty early on after the time skip--way before I thought they should have for the purposes of tension--but it was still quite interesting to see their reactions and the reactions of their companions.


All of these companions and side characters are fairly fleshed out, many with tragic backstories of their own or great senses of humor. There was also a well-developed LGBTQ+ relationship in the novel. Despite the fact that the author is a man, it never once felt like his portrayal of his female characters was awkward in the way that male authors often are in their exploration of the feminine perspective. Likewise, his portrayal of a romantic relationship between two women was also well-written. It did not feel like it was added in simply for the sake of diversity, but had a foundation, believable progress from friends to lovers, and did justice to both of the character’s personalities. I still preferred the LGBT+ relationship in The Priory of the Orange Tree, which I thought was more emotionally charged and stronger on the whole, but it’s still really nice to see this kind of representation--especially in fantasy novels, which tend to stick to the straight and narrow.


Gyre’s heterosexual relationship is similarly authentic in its development but I liked it a lot less, personally, since it wasn’t as serious. In fact, in my opinion, the best relationships in the novel are not romantic. The bonds between Maya and her mentor Jaedia are very strong, and reminded me of some of the best Master-Padawan relationships in Star Wars. Similarly, Jaedia’s conflicted friendship with Tanax, a member of an opposing sect in the Order, is also very interesting on many different levels, as was Gyre’s friendship with the other members of the rebel cell.


Despite thinking the world-building was very interesting, and especially enjoying the characters of Maya and her Centrach mentor, Jaedia, I felt that as a whole, Ashes of the Sun was missing a little something extra that would have made me love it. I didn’t squeal with delight at the romances or heave a sigh of relief when a battle scene was over. Though I really enjoyed reading the book, it never provoked an emotional response to me, even when characters died. As someone who is a big crier, this is probably a bad sign. I definitely did not have a strong connection to most of the characters--whether good or bad. And I think the author could have spent a little more time on developing his side characters even more to make the tragedies that befell a lot of them more emotional. Or perhaps it’s simply because many of the characters don’t seem to care much when other characters die and simply go about their business.

“He turned back to his task, shaking his head. It’s not like I haven’t killed….But there was something about the utter casualness of Kit’s violence that gave him pause. Don’t get soft, he chided himself. You’ve done far worse things….And, if he did find the power he wanted, no doubt there would be worse yet to come.”

The only other thing I really didn’t care for in Ashes of the Sun was that some of the fantasy terminology wasn’t very well explained. In a fantasy book of this size, that can be quite problematic. Ashes of the Sun does provide a glossary of these terms, but in the Kindle edition, it was all the way in the back. And we all know how hard it is to maneuver to the back of the novel and then forward to where you were reading in the Kindle. What’s more is author Wexler definitely adheres to the school of thought which assumes his reader isn’t stupid and can put everything together through context--there’s not very much explaining as compared to authors like Brandon Sanderson, who meticulously spell out all of their lore, mythology, magic systems, etc.. I was able to figure out what Ashes of the Sun was talking about, but the glossary would have really illuminated a lot for me if I had perused it first, especially since there’s many terms in Ashes of the Sun, which start with the letter “d”--”deiat,” “dhaka,” “dhakim”--and it was a lot for me to keep straight. I even had to refer to the glossary to write this review.


Ultimately, Ashes of the Sun is a solid fantasy read with interesting world-building (though a lot of its foundations will look very familiar to Star Wars fans, this isn’t a bad thing), and lore. However, if you’re looking for a fantasy book that’s very high stakes, charged, and going to send you on an emotional roller coaster, like A Song of Ice and Fire, this may not be the book for you. I plan to read and am excited for future installments in this series and more of author Django Wexler’s other novels.