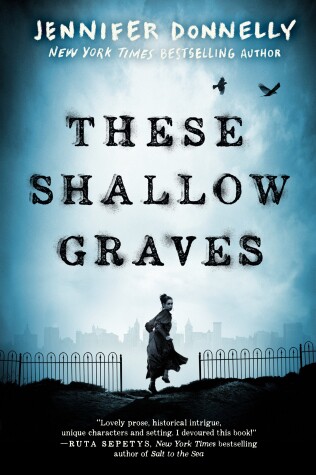 The New York Times bestseller from the acclaimed author of A Northern Light, Revolution, Stepsister, and Poisoned. This thrilling mystery is perfect for fans of The Cellar and Suicide Notes from Beautiful Girls. It's a story of dark secrets, dirty truths, and the lengths to which people will go for love and revenge.

Jo Montfort is beautiful and rich, and soon—like all the girls in her class—she’ll graduate from finishing school and be married off to a wealthy bachelor. Which is the last thing she wants. Jo dreams of becoming a writer—a newspaper reporter.

Wild aspirations aside, Jo’s life seems perfect until tragedy strikes: her father is found dead. The story is that Charles Montfort shot himself while cleaning his revolver, but the more Jo hears about her father’s death, the more something feels wrong. And then she meets Eddie—a young, smart, infuriatingly handsome reporter at her father’s newspaper—and it becomes all too clear how much she stands to lose if she keeps searching for the truth. But now it might be too late to stop.

The past never stays buried forever. Life is dirtier than Jo Montfort could ever have imagined, and this time the truth is the dirtiest part of all.

Praise for These Shallow Graves:

“Lovely prose, historical intrigue, unique characters and setting. I devoured this book!” —Ruta Sepetys, New York Times bestselling author of Between Shades of Gray and Salt to the Sea

“A fast-paced Gilded Age crime thriller.” —Julie Berry, award-winning author of All the Truth That’s in Me

My full book review is up on Word Revel.

Initial thoughts: This is a book of starkly contrasting moods, which made These Shallow Graves such a varied read. Jo was so naïve at times (as many upper class girls in the late 19th century would've been), building up a fair amount of situational comedy. On the flip side, there were violent moments that veered into graphic descriptions. And then, just a few pages later, tender moments unfolded.

These Shallow Graves spans several genres — historical fiction, mystery, and romance. You'd think the threads of the plot would get awfully tangled with so much going on. They didn't. Everything fit together quite purposefully, all while keeping on track with the overarching plot.

Note: I received a finished copy from a local distributor in exchange for an honest review. This does not affect my opinion of the book or the content of my review.
I read Revolution by Jennifer Donnelly back in the day before I began blogging and was really impressed by her story telling capabilities. Period pieces seem to be her specialty, so when I heard she was releasing a Victorian-era mystery with definitely creepy vibes, I was right on board. I had an ARC from ALA of this book and barely had the chance to start it last fall before I got sick the first day I was reading it, and after that distraction I never got around to picking it up again until a year later.

I'll start with the disclaimer that this book is definitely not as good as Revolution, but I found that I enjoyed it nonetheless. Jo was a likeable, if at times incredible naive, protagonist and it's always fun to read the rebellious-rich-girl narratives. I liked the way the press played a part in the mystery, and Jo's ambition to be a reporter and tackle women's issues was charming if a bit idealistic for someone from her demographic. I found that I did end up rooting for one of the romances in the novel, and I loved many of the eccentric secondary characters as well, such as Oscar, Jo's acquaintance turned friend who works in a morgue and practices the new and controversial "forensic science." I knocked a few stars off of my rating because I found the plot to be pretty predictable, and sometimes Jo was so stubbornly naive and took such stupid risks that I found myself rolling my eyes a bit. However, even if it wasn't the most original story I did like how all of the ends were tied up at the conclusion of the novel and how everything fit together in a pretty clever manner. I'd definitely try another book by Donnelly.

Overall: An engaging, if a bit predictable period mystery set it Victorian-era New York. If you're a historical fiction fan and like engaging secondary characters you'll most likely find this to be a suitable read for you.This review was originally posted on Girl in the Pages
This is a book I normally wouldn't have picked up. I don't really read mysteries. I like NEVER read American historical fiction. But this was a book up for bool club and it was the only one I could quickly grab from the library. And it did have an interesting synopsis. I am very thankful because it sucked me in!!! What an incredible set of characters and I just loved the way the author exposed so many of the issues of late 19th century NY city! We see the various ways that women are trapped - poor and rich alike - and the ways they're starting to break free. We see new technology, science, and journalism. We see tenements, poverty, orphans, pick pockets, madame's houses, mad houses, and more I'm sure I'm forgetting. Despite being an amazing lens into this world, it never felt too historical. It was housed behind a great mystery, sweet romance, and an empowering tale of how Jo Montfort finds herself, her voice. Loved it and will have to pick up this author again.
I loved this book! Donnelly has crafted a fantastic mystery story with a believable period setting, as well as an admirable heroine. I really don't have anything negative to say, except that I'm irritated that the book store hasn't had more of her works on the shelves for me to buy.
http://www.divabooknerd.com/2015/12/a-must-read-these-shallow-graves.html
I'm not the biggest fan of historical fiction, let's face it, it's quite often boring and like watching paint dry. But These Shallow Graves? Phenomenal. I loved it from cover to cover. I may have even licked the pages a little. It follows the storyline of Josephine, a society girl born into wealth in an era where girls are trophies, lovely to look at but not held in high regard. She dabbles with investigative articles for her school's whimsical newspaper, but craves more and dreams of being able to report from the slums of New York's underbelly. I adored how Jennifer Donnelly highlighted how restricted females were in 1890, trained as doting wives and not allowed independent thoughts. None more prevalent than when Jo walks into Eddie's life.

Eddie is a knockabout larrikin. He's a reporter who wants to investigate real stories, not just the society pages he's forced to write. He's never met anyone like Jo, determined as she is beautiful and not at all like the well polished girl from the society pages. As the two follow the leads to find her father's killer, Jo and Eddie form a tense and tentative friendship. Their attraction is undeniable, but Jo is from a wealthy family who would never accept a lowly writer as her companion, especially not now she's betrothed to one of New York's most eligible bachelors. The forbidden romance was intense, seeing the bond forming between Jo and Eddie was so incredibly lovely as Eddie struggled to keep her safe. In an era where women of substance are well bred and demure, Jo refuses to conform. I adored her character as an individual and within her budding relationship with Eddie. She doesn't lose perspective or is willing to play the damsel in distress, which is often the issue I find with young adult historical fiction.

The only issue I found was that the big reveal was predictable. But then again, when it comes to mysteries, I'm suspicious of most characters. I would have loved to have seen this turn into a series. With Jo's conclusion, readers could follow her story beyond the final page and I for one would buy the shit outta that.

These Shallow Graves is nothing short of lovely. Telling the story of an oppressed girl in an era where women are treated as breakable, demure and incompetent of independent thought. Josephine's dry sarcasm and her ability to discover a world so far removed from her own was incredibly charming. An intense and slow burning romance, mystery and intrigue, These Shallow Graves is a phenomenal read from a fresh voice in young adult historical fiction.
Five Reason to Grab Your Earbuds and Listen to These Shallow Graves

Audio provided by publisher. This review was originally posted on Caffeinated Book Reviewer