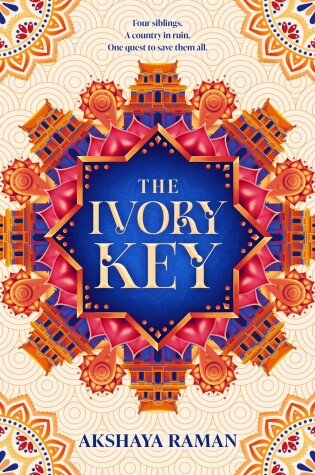 In this epic YA fantasy debut, magic, a prized resource, is the only thing between peace and war. When magic runs out, four estranged royal siblings must find a new source before their country is swallowed by invading forces. The first in an Indian-inspired duology that’s perfect for fans of There Will Come a Darkness, The Gilded Wolves, and We Hunt the Flame.

Vira, Ronak, Kaleb, and Riya may be siblings, but they've never been close or even liked each other that much. Torn apart by the different paths their lives have taken, only one thing can bring them back together: the search for the Ivory Key, a thing of legend that will lead the way to a new source of magic. Magic is Ashoka's biggest export and the only thing standing between them and war with the neighboring kingdoms—as long as their enemies don't find out that the magic mines are nearly depleted.

The siblings all have something to gain from finding the Ivory Key, and even more to lose if they don't. For Vira, the Ivory Key is the only way to live up to the legacy of her mother, the beloved former maharani. Ronak plans to get out of his impending political marriage by selling the Ivory Key to the highest bidder. Kaleb has been falsely accused of assassinating the former maharani, and this is the only way to clear his name. And Riya needs to prove her loyalty to the Ravens, the group of rebels that wants to take control away from the maharani and give it to the people. With each sibling harboring secrets and conflicting agendas, figuring out a way to work together may be the most difficult task of all. And in a quest this dangerous, working together is the only way to survive.

The Ivory Key is the first novel in Akshaya Raman's dulogy of the same name. This is yet another series started through OwlCrate, so I'm really hoping that they'll do a special edition of the sequel. Fingers crossed! The Ivory Key is a young adult fantasy novel that will pull readers in and leave them wanting more. At least, that's how it was for me!

Vira, Ronak, Kaleb, and Riya. At a glance, these four may not seem like they have much in common. Vira is desperately trying to stand tall and live up to her mother's legacy while ruling a nation. Ronak is desperate for an escape, a way out of this arranged marriage (among other things). Kaleb is in prison – wrongfully accused of murdering his own mother. And Riya is on the run, cutting herself off from her family in favor of the found one she made for herself.

There's one thing these four have in common: they're family. Together they must locate the ivory key, or their nation is doomed. This key will unlock a resource that enables their nation to produce magic – a vital part of their security, economy, and way of life.

“He was right. Papa had been too obsessed. Amma had been too busy.
They’d done their best to prepare their children to face the world, but in the end, they’d left the four of them largely alone.”

I don't know about everyone else, but I've been enjoying the duologies coming out of YA and fantasy. The Ivory Key is no exception, and I am very much looking forward to the conclusion of this tale.

The Ivory Key is split into four perspectives: Vira, Ronak, Kaleb, and Riya. They are all so different, yet there are a few things they have in common. They're all siblings, and they want to get their hands on the Ivory Key.

It took me a bit of time to really get invested in all four characters. However, there were a couple that I loved right off the bat (any guesses?). By the end, it was easy to appreciate their different views and goals (even if I didn't always agree with the conclusions they came to).

The complexity of the political situation, the personal dilemmas, and even the magic of this world absolutely captivated me. There are so many questions bouncing around in my head, and I can only hope that the sequel (The Crimson Fortress) will answer those questions.