Maybe in Another Life: A Novel 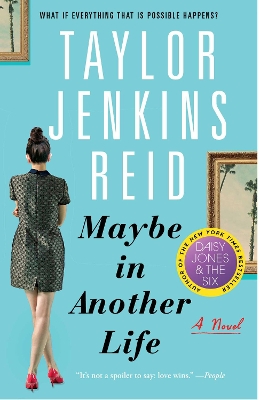 Maybe in Another Life: A Novel

From the acclaimed author of Forever, Interrupted and After I Do comes a breathtaking novel about a young woman whose fate hinges on the choice she makes after bumping into an old flame; in alternating chapters, we see two possible scenarios unfold—with stunningly different results.
At the age of twenty-nine, Hannah Martin still has no idea what she wants to do with her life. She has lived in six different cities and held countless meaningless jobs since graduating college. On the heels of leaving yet another city, Hannah moves back to her hometown of Los Angeles and takes up residence in her best friend Gabby’s guestroom. Shortly after getting back to town, Hannah goes out to a bar one night with Gabby and meets up with her high school boyfriend, Ethan.
Just after midnight, Gabby asks Hannah if she’s ready to go. A moment later, Ethan offers to give her a ride later if she wants to stay. Hannah hesitates. What happens if she leaves with Gabby? What happens if she leaves with Ethan?
In concurrent storylines, Hannah lives out the effects of each decision. Quickly, these parallel universes develop into radically different stories with large-scale consequences for Hannah, as well as the people around her. As the two alternate realities run their course, Maybe in Another Life raises questions about fate and true love: Is anything meant to be? How much in our life is determined by chance? And perhaps, most compellingly: Is there such a thing as a soul mate?
Hannah believes there is. And, in both worlds, she believes she’s found him.

Was listening to this one on audio and I've just lost interest in it.
Just wasn't the book for me right now. I might try it again later on.

I'm completely jealous of the main character's relationship with her best friend. Beautiful friendship.
I'd been wanting to pick up Taylor Jenkins Reid book for a really, really long time when I saw that Maybe in Another Life was available through my library's Overdrive account. It wasn't the novel of hers that was highest on my TBR list or the one that people recommended I start with, but since it was the only one available I decided to dive in, craving a break from my typical YA books in favor of exploring the lives of characters in their later 20s. I fell completely head over heels in love with Jenkins' writing, her characters, and her ability to write adult fiction that captured the transitional decade of one's 20s so poignantly and realistically.

In many ways, Maybe in Another Life has the potential to be a disaster. It follows the story of Hannah Martin, a 29 year old woman who still hasn't really set any roots or solidified any future for her life. After living in numerous cities across the United States, she decides the best course of action after getting out of a messy relationship is to return to her hometown of Los Angeles. On her first night home she encounters an ex-boyfriend who had a huge impact on her teenage years, and makes the decision of whether to go home with him or not. The book then diverges into two story lines told in alternating chapters. In one world Hannah goes home with Ethan, and in the other she doesn't. Reid does the best job I've ever read in handling the alternating plot lines without the story ever getting muddled or confused. Each plot, while different, keeps pace with the other and large plot points occur at the same time in both time lines, albeit in different ways. Each chapter ended in a mini cliffhanger, making me crave more, but then dragging me back into the other universe which was so, so compelling.

Aside from Reid's skill at handling the parallel universe structure, I was impressed with her ability to balance both romantic relationships and strong friendships and give them equal weight. Hannah's love interests are definitely a huge part of each story line, but what was even strong was her friendship with her friend Gaby, who is there for her no matter what traumatic, drastic, or scary life changes Hannah is going through. Hannah in turn is able to reciprocate this behavior for Gaby as well, and it didn't feel like a disingenuous friendship that was inserted for the sake of having a female friendship represented. Gaby and Hannah embody every positive aspect of female friendships and completely shatter the negative stereotype of female friendships.

I also applaud Reid's ability to make me like a protagonist that under normal circumstances would have probably driven me up the wall. At the beginning of the novel (and for most of her entire life), Hannah is impulsive, non-committal, and rather irresponsible. These are traits that really grate against my admittedly Type-A personality. However, Hannah's kindness, realness, and honesty kept me far from being irritated. She's aware of her flaws and throughout the course of both universes we see her actively working on taking control of her life and of fate (a huge theme throughout the novel). By the end of the novel Hannah's character growth is so strong and realistic that I felt so attached to her and happy with the outcome and choices she made in both universes, because she had made them with courage and conviction.

Overall: Taylor Jenkins Reid is clearly gifted in writing about what it means to be an "adult" today, and how there are so many more stages of it than you acknowledge or realize until you're living in them. I loved the parallel universe structure of this book, the way that both story lines felt authentic and true to Hannah, and the way Reid gives her characters so much depth that I could bump into them walking down the street (or standing in line at a bakery for a cinnamon role). The one wish I had about this book is that it had either been a bit longer, or that less of the time had been spent on setting up the two universes and had focused a bit more on the outcome of certain major life choices. I know that I am going to be a Taylor Jenkins Reid reader for many, many years to come as I navigate my own adulthood.This review was originally posted on Girl in the Pages
Reviews at The Artemis Reader

So I had this whole great review typed out but apparently it did not post! Disappointing but here are few thoughts on this book.

I surprisingly enjoyed this book. I’m not a huge fan of anything usually labeled as “chick lit” but a friend found this an interesting read, and I trust said friend with her reading suggestions (she’s about 95/100 right now with recommendations). Hannah was an easy enough character to like. I think being in the same age group as the main character, often questioning a lot of the same things, is why I really enjoyed this book. It’s always comforting to know you are not the only one going through a particularly difficult time in your life. It was also an interesting retrospective on the choices we make and how those choices define us. While I wasn’t crazy about how boy-focused Hannah’s universes became.

Overall a wonderful read! I ended up reading this in one day. The plot alternates between the two choices Hannah makes and made me anxious to find out how each one ended up.
You guys! Taylor Jenkins Reid has DONE IT AGAIN. I read After I Do a while ago and it was such a fascinating look at a marriage, so refreshing, so open and honest, so brilliant, and I can't quite believe it's taken me so long to read Maybe In Another Life because it's SO GOOD. I will say this right now: Taylor Jenkins Reid is one of the absolute finest women's fiction writer out there. She's insanely good at writing books you just click with immediately and devour as quick as you can. Long may she continue writing her books because I will buy them forever.

Maybe In Another Life does something no other book I've ever read has done: it has two concurrent storylines. What happens to Hannah if a) she heads home with her best friend Gabby, or b) she stays out for the night with her childhood sweetheart Ethan, after returning to L.A. But they play out FOR THE ENTIRE BOOK. Yes, the book does not converge into one. The storylines play out, in absolute full, be that the right decision or not, it really depends whether you're #TeamHenry or #TeamEthan I was #TeamEthan until #TeamHenry came along, opened my eyes and I fell in love. What can I say, the heart wants what the heart wants, and while Ethan was sweet enough, Henry just lit up the whole book, in this organic way, like where had he been all my life? That's how I saw it anyway.

The way the two storylines play out is fantastic, because you get to see how Hannah's life would have gone either way, and they both had their good points and bad points. For example, the Ethan storyline has Charlamagne. And when a storyline adds a dog, I'm a goner. But the Gabby storyline resonated much more, I thought. Both had their merits though and I am absolutely intrigued as to how Taylor put this together - did she write both storylines concurrently? Did she write them separately and weave them together? WHY DOES SHE HAVE SO MUCH WRITING GENIUS?!??!?! It takes a lot of skill to pull off writing this kind of book and Taylor does it so effortlessly it's like the words just magically appeared. (I'm sure that's not true AT ALL, but the words just flow so easily.)

Maybe In Another Life was such an amazing book. The characters were absolutely exceptional. I loved Hannah and her friendship with Gabby was second-to-none and one of my absolute favourite parts of the book, in both storylines. And Henry! Ah, Henry. This was such an emotional, thought-provoking read, with such magical storytelling that I am absolutely envious of Taylor Jenkins Reid. She is a story-spinning wizard. I MUST read Forever, Interrupted soon. Go read this, women's fiction fans. This is superior women's fiction. You do not want to miss this, and you'll thank me when you do read it.
Audiobook rating: 4.5 stars
Book rating: 4 stars

Initial thoughts: How different would life be today if my family or I would've made a different decision? That's a question that's always at the back of my mind because one shift could've led me to grow up in any other country, such as Brazil, Kenya, France, Papua New Guinea or who knows where. These places where all on the table at some point and it's an odd thought that I might've learnt Portuguese or Swahili or might've remained fluent in French. Naturally, Maybe in Another Life resonated with me as two different life paths of the protagonist were presented.

A first I was worried that I wouldn't be able to keep up with the two alternative storylines because the chapters weren't clearly marked in the audiobook. I go the hand of everything pretty quickly though. It was oddly satisfying to know something about the character's lives in one universe, so to speak, because of the alternative one.

Two opposing choices with different outcomes that still found some overlaps also grappled with the notion of fate vs. choice in a very clever way. Inevitably, Maybe in Another Life raised the ultimate question: which choice is the right one? At the end of the day, making one bad choice could lead to many good ones, so who's to one path os any worse than the other?

And my heart breaks for every single version of me that didn’t end up with you.