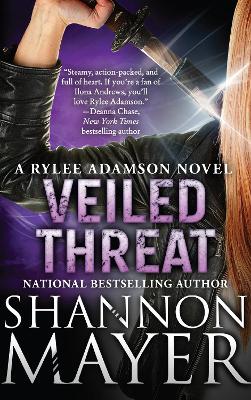 My name is Rylee and I am a Tracker.”

When children go missing, and the Humans have no leads, I’m the one they call. I am their last hope in bringing home the lost ones. I salvage what they cannot.

Demons are putting rips in the veil in order to cross over and steal my friends and allies away.

But, going after them isn’t even close to simple. The deepest level of the veil is not a place you can just open a doorway too, after all, and of course, that’s where they’ve been taken.

As fate would have it, it looks like I might get some help from a trained demon slayer and his fire breathing ride.

The only problem? Said demon slayer claims to have family ties to me. And I’ve never trusted my family.

Nor am I about to start now.

I picked up the first book in the series, Priceless on a whim a few years ago. It was on sale for $0.79, I liked the cover and the blurb drew me in. I hadn't really read any urban fantasy prior to it but I've always loved fantasy and the idea of a more grown up fantasy grabbed me. And it was perfect. Everything I expected and so much more. I proceeded to demolish the remaining available books and Shannon Mayer has fast become one of my favourite authors. All of the books are full of fast paced, well written plots, hysterically funny lines and lots of heart. The characters worm their way under your skin until you're cheering with them at their successes and sobbing with them at their failures. Couldn't recommend the series more highly and will certainly be rereading many many times.

I dunno. Erik seems pretty suss. Didn't know she was alive? He knew she existed - wouldn't you go the ends of the earth to find the truth instead of just abandoning her?

“How do I know you are really my uncle, or if you are my uncle, you’re not some evil ass relative who’s waited for years to get your revenge on my parents by trying to take me out?” Fuck, I felt like some twisted Disney princess saying that, but the possibility was there. Especially with my life.

Too true Rylee, too true. Poor Blaz being ambushed.

Hey Ophelia told her how. I like that. Heroes basically never got told how. Just why and who and what. The rest is fake it til you make it crap. I like.

Berget has a crush on Doran me thinks. But Doran likes Rylee. And well, let's not discount Faris because let's face it - he loves Rylee too. What a mess. Which only gets messier once you add in Pamela liking Will and Will liking Rylee and Rylee liking Liam. Plus Ophelia liking Blaz who likes her cousin who died. Hot damn.

Ohhh. I mixed up Sla and Sas. So Sas is the female Dox and the Triplets slept with. Sas was the leader of the ogres. Right.

Poor Eve. But Alex. Alex has love.
I'm not a huge fan of Frank. He irritates me. He's just so...I don't know - not a team player? Not into the supernatural? I don't know.

Jeez, what a family. Poor Rylee. Erik sucks. Poor Ophelia, having her rider die and her mate ignore her. At least have the balls to tell you're just not that into her. Is there really any need to make a song and drama over it?


“You would try and best me? After you saw the carnage of the red caps, you think you could do better, you and your pet?” Alex let out a long low growl. “There is no try.” Of all the times for him to quote Star Wars, of course this would be it.

Alex speaks for himself.

Do we really have to plan for Rylee's love life when Liam dies? It makes me feel sick. Fucking Will. God I hate him. Why can't he ever fight his own fking battles? Besides Liam why Will? If you're going to hand Rylee up on a platter to someone, let it be Doran, who at least is likable.

“Then you must mean the Tracker.” Slowly, the necromancer bobbed his head. “Yes, I see it in her now. The confidence, the brash behavior, the belief everything will turn out in the end. It never does, you know. The darkness is always stronger than the light, snuffing out candles and hope with a single sweep of its hand.”

Megan being all badass makes me miss Pamela. I just like Pamela better. #sorrynotsorry

I don't like the deep level of the veil. Creepy. But Giselle!

A monster building. Bloody Trackers. Friends and enemies wherever you go.

This series just twists me up inside.