The Last Wolf (Legend of All Wolves, #1) 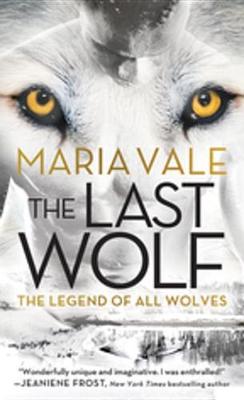 The Last Wolf (Legend of All Wolves, #1)

I liked this story, but it did not wow me. If you are looking for romance, then this is not a book for you. The main characters became a couple, but the focus was more on pack politics and survival.

The Last Wolf, the first book in The Legend of All Wolves, tells the story of Silver Nilsdottir and Tiberius Leveraux. Silver is a member of the Great North Park, an ancient breed and the first of their kind to relocate to North America.

Because of a birth defect, Silver is at the lower echelon of the pack, destined to be a slave. At the moment she was to face her destiny, a wounded shifter seeking refuge entered their midst. To save him from death at the hands of her pack members, she offered to become his protector, which released her from becoming a slave. This would prove a risk as they both faced the possibility of being exiled if the Pack did not consider the stranger worthy to become a part of them. In addition, he is keeping a secret, which has the potential to destroy the pack.

The prologue provided a history of how the pack ended up living in North America. We also see how the enmity between shifters and werewolves originated. The events which occurred were interesting, which had me looking forward to the rest of the story. However, it did not go as expected. I found the pacing to be slow, and it took me some time to get into the story. In addition, I found parts of the story difficult to follow. I had to reread several paragraphs in my aim to grasp the Pack’s rules and behaviours among other things. The story yielded a few laughs and some awkward moments. Narrated from the POV of the heroine, the story treats readers to her perspective, but I feel it would have more of an impact if Tiberius’s POV was introduced.

Silver and Tiberius had a lot in common. They were both damaged physically and emotionally. Tiberius refused to embrace his wolf as result. Silver is determined, resilient, loyal, smart and somewhat impulsive, while Tiberius was strong and protective. I enjoyed getting to know them as individuals, but I found it difficult to connect with them as a couple.

I found the world building unique. Pack members and shifters were sworn enemies and would kill each other when the opportunity arises. The pack members were wolves who changed to humans. Some were not comfortable being humans but did so as a means of survival. Shifters were humans who changed to wolves and preferred to embrace their human sides. The laws and customs of the pack were strange and gruesome. For example, whatever they killed, had to be eaten, which led to a few stomach-turning moments.

Narration
I received an ARC through Netgalley, but never got around to reading. I purchased a copy earlier this year and just as I was about to read it I discovered it was in Audible Escape, so I listened to the audio. It was my first time listening to Rachel Dulude. I enjoyed her portrayal of Silver. She brought the story to life, which made it easy to listen.

Conclusion/Recommendation
Overall, I found The Last Wolf to be an interesting start to the series.

This review was originally posted on Totally Addicted to Reading
This is an odd duck to categorize. It’s got all the hallmarks of a romance novel (HEA ending, traditional romance plot arc, etc) but it’s also quite dark and raw. I think if you go into this expecting a regular paranormal romance, you'll be disappointed. But, oh man, this book surprised me in such a good way. This is the gritty paranormal romance I never knew I wanted!

In most of the paranormal/urban fantasies I’ve read, the shifters consider themselves both animal and human and generally try to fit in with human society, mostly out of necessity. In this book, the wolves, like Sil, consider themselves wolves first and are “in skin” (human form) only when necessary. Many live separate from human society, though those that do need to interact with humans on a daily basis (like their lawyers, accountants, etc) return home for the three days of the Iron Moon, when the wolves are forced to be in wolf form and are unable to change back to human. Those who are able to change back and forth at will, regardless of the moon phase, are called Shifters, and they chose to emphasize their humanity. Though they’re the closest to the usual shifter portrayal in romance, they’re actually the bad guys in this book.

The world building was superb. Their society is strikingly different from human society, and I thought Ms. Vale did a wonderful job of slowly explaining bits of it as it came up. Everything in their society revolves around the safety of the pack, so things that seem unspeakably horrible to a human (without being too spoiler-y, how Sil’s disability is dealt with) are accepted as a practicality. Ms. Vale does a great job of showing why the wolves are the way they are, and I really felt like I understood Sil’s love for her pack and the wild, despite the hardships she’s faced. I loved Sil. I loved her strength and her strong moral compass, and while I didn’t agree with all the choices she made, I understood why she made them. I started out the book identifying more with Ti and his confusion, but as the pages went by and more about the wolves’ way of life and reasoning became clear, it was Sil I sympathized with, especially her frustration with Ti’s inability to conform to the wolves’ way of life.

If you’ve read grimdark fantasy before, you’ll be familiar with a certain kind of humor that usually serves as a counterpoint to all the grittiness. That’s also present here, and some of it was masterfully done. I’m thinking in particular of the teacher who seems to be applying lipstick every time she appears.

As for cons, this is a first book, and I think it shows in some of the pacing and plotting. I never really felt like I understood why the Shifters felt they way they did about the wolves. Also, there are some threads that aren’t wrapped up, but as this is the first in a planned series, that’s expected.

Overall, while this wasn’t at all what I was expecting, I enjoyed this book very much and simply could not put it down, to the point where I stayed up way too late during a family vacation reading and didn’t regret it at all the next day! Recommended for fans of paranormal romance looking for something fresh and new, and for fans of urban fantasy who don’t mind a little romance in their grimdark.

I received an advanced copy of this book from the publisher in return for an honest review.

Legend of All Wolves (5 books)