Ship of Smoke and Steel (Wells of Sorcery Trilogy, #1) 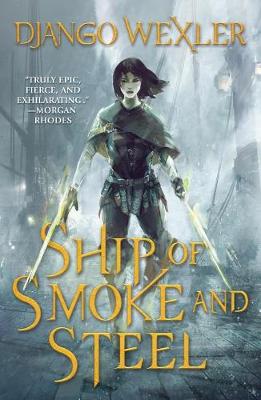 Ship of Smoke and Steel (Wells of Sorcery Trilogy, #1)

Ship of Smoke and Steel is the launch of Django Wexler's cinematic, action-packed epic fantasy Wells of Sorcery trilogy.

A FIERCE WARRIOR. HER DEADLY MAGIC.
AN EPIC MISSION TO STEAL A GHOST SHIP.

In the lower wards of Kahnzoka, the great port city of the Blessed Empire, eighteen-year-old ward boss Isoka enforces the will of her criminal masters with the power of Melos, the Well of Combat. The money she collects goes to keep her little sister living in comfort, far from the bloody streets they grew up on.

When Isoka's magic is discovered by the government, she's arrested and brought to the Emperor's spymaster, who sends her on an impossible mission: steal Soliton, a legendary ghost ship—a ship from which no one has ever returned. If she fails, her sister’s life is forfeit.

On board Soliton, nothing is as simple as it seems. Isoka tries to get close to the ship's mysterious captain, but to do it she must become part of the brutal crew and join their endless battles against twisted creatures. She doesn't expect to have to contend with feelings for a charismatic fighter who shares her combat magic, or for a fearless princess who wields an even darker power.

“Truly epic, fierce, and exhilarating, Ship of Smoke and Steel will capture you and lock you away. With magical combat sequences fit for the big screen, the action is almost as breathtaking as the intrigue.” —Morgan Rhodes, New York Times bestselling author of the Falling Kingdoms series

Ok, I'll be honest I've had a copy of this book for a full year without reading it. I know it's a year, because there's a date inside from when I got it. So...yeah. Having finished it last night, I'm regretting not reading it sooner.

The characters are excellent - there really are nuances that many authors don't manage to catch. It's truly rare for someone to be *all* good or *all* evil. Everyone has the capacity to be EITHER, depending on their choices - and Wexler captures that very well here. Particularly as this is his first YA book, he very clearly is not talking down to the reader, and that is fabulous. Also - very LGBTQ friendly, which as a bookseller, is excellent. I love having another title in my arsenal for those who request it.

The story is unique - after finishing it, my brain is still pondering some of the things I read about. Yes, there's magic of a sort, but the different wells, and THE SHIP OMG THE SHIP. Absolutely fascinating, this floating world where weird things happen and no one understands. No spoilers, the ship plays such a large part that it's pretty much a character in its own right.

Which brings me to the setting - again, this ghost ship, this giant floating world that no one knows anything about but that collects "tributes" at different ports, mostly those with some form of the well magic. This ship that somehow becomes a city in its own right, but with an element of thunderdome. Wexler's descriptions are so well done that I had little trouble picturing the levels, the creatures, or the humans that somehow all occupy this space.

Overall, I really enjoyed this title, and I'm quite looking forward to book two - because I HAVE QUESTIONS. The story does have an ending, so there aren't any major cliffhangers, but...there is still much more to the story that hasn't been revealed yet. I can't wait until the magician pulls back his curtain to reveal what happens next. #ShipofSmokeandSteel
Not Wexler's best work but it's still good. I am very much rotting looking forward to read the next book.
I was not expecting to love this book as much as i did. This is the story of a magic ship and sister who will doing anything to keep her younger sister safe including stealing a magical ghost ship. This book is this author debut into YA and i think it fairly well done but i would recommend it for older ya readers. For this reason that their heavy romantic situations and a lot of violence which may not be the best for younger readers. This story is not lacking at in action or intense situations. This story centers around the Ghost Ship for the majority of the story. Django Wexler has crafted an amazing diverse cast of characters.

Our main character Isoka is a powerful and confident in combat at least not so much in the love department. I think that was the only thing that might of rubbed me a bit was she always questioning her love. I think she should of just jumped in head first way sooner then she did. This is the perfect book if you enjoyed six of crows and i really can’t wait to see how the rest of this adventure plays out in the following books.
Initial Thoughts: Extremely dark, in a way not like much else I've read in YA. At least it's different. The world building could have use a bit more work in the details (for example, if you live on a ship where you never go on the deck and never see the sun, that's going to do terrible things to your health and sleep schedule).
Ship of Smoke and Steel by Django Wexler

I have never read a book by Django Wexler before and this book in particular I admit wasn’t even on my radar until I saw it on a blog post at the end of 2018, adding it to my TBR was a fantastic decision.

I’m a little behind on writing these thoughts, but I think it’ll be somewhat of a norm from now on given my situation. Anyways, I’ve always been a fan of high fantasy, it’s so easy and completely understandable to imagine mediaeval settings and work your story around it, but I always appreciate it when authors try to create something totally new and I can throw myself in it. Django Wexler created that world for me in this book, even though it started out somewhat in a typical fashion, it went on ahead to become one hell of an entertaining journey to take with Isoka onboard that ship.

I’m not a big fan of ghosts, vampires, werewolves and the like of the supernatural creatures, dragons and elves are more my style, but the way Django Wexler wrote this ship and added stuff to it to make it engaging was insanely fun. The supernatural aspect doesn’t take over the fantasy aspect of it and vice versa, they compliment each other with the somewhat slow progression he had with the plot after we get to the ship. I mean, personally, I didn’t really expect he’ll start me off with an impossible situation, give it a slice of life in a dangerous fantasy setting flare and end it with a huge bang. But I’ll be lying if I said I don’t appreciate it, I love slow journeys if there is something to gain from them and learning about the ship through the mini adventures in this book was fantastic for me.

I did figure out the big plot twist in the end from the minute a certain someone was introduced, but even then the book didn’t actually become boring. No, the way he made it brutal and gory as it should be given the situation while making sure it’s actually needed was an awesome thing to see. It reminded me a bit of Jay Kristoff’e Nevernight, which is another book I enjoyed immensely. The magic system in this book was fun as well, I didn’t see all the applications for it just yet given how we only focused on the more important things this time around, but I’m sure and hopeful the sequels won’t disappoint in that regard.

The characters themselves ranged from very interesting to forgettable, not forgettable in the sense you won’t know who they are after a while, but more so that I didn’t really care for some of them even when bad things really happened to them. Isoka starts off really hard to like, but for me personally a tough as nails persona that isn’t just talk, is definitely something I appreciated. There is nothing more disgusting than seeing an author hype up their character and end up seeing that character act like the complete opposite of what they’re talking about. Isoka was ruthless, unlikable to a degree and ambitious throughout the book which I really appreciate. One last thing I really liked in this book is how Django Wexler handled the romance, it didn’t overtake the plot and it was mostly moments of passion more than anything else while some exploration was going on which is fine by me, the less the better from this aspect when you have something this entertaining.

The thing I wished more of though (other than extra applications of the magic system) is information about the ship, given that it’s not what you’d expect of one, I wanted to know a lot more about the makings of it, the mechanics, other areas and what else it could possibly hold which I’ll hopefully get in the sequels. It was a fun read and for it being his YA debut, I’m really looking forward to see what’s going to happen from here on out!