Siege of Rage and Ruin (Wells of Sorcery Trilogy, #3) 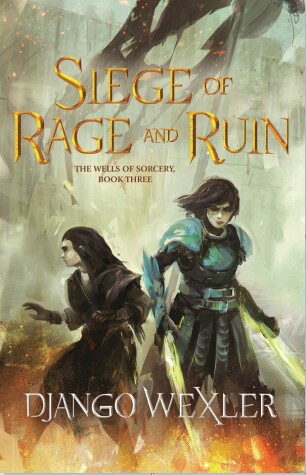 Siege of Rage and Ruin (Wells of Sorcery Trilogy, #3)

Siege of Rage and Ruin is the explosive final adventure in Django Wexler's The Wells of Sorcery trilogy, an action-packed epic fantasy saga.

Isoka has done the impossible—she’s captured the ghost ship Soliton.

With her crew of mage-bloods, including the love of her life Princess Meroe, Isoka returns to the empire that sent her on her deadly mission. She’s ready to hand over the ghost ship as ransom for her sister Tori’s life, but arrives to find her home city under siege. And Tori at the helm of a rebellion.

Neither Isoka’s mastery of combat magic, nor Tori’s proficiency with mind control, could have prepared them for the feelings their reunion surfaces. But they’re soon drawn back into the rebels’ fight to free the city that almost killed them.

Well that was disappointing. It wasn't an awful book but I thought it was the weakest in the series.

Everything with the emperor felt like a big joke.

I thought more was going to happen with that guy Tori liked for a while. That felt like a mostly dropped plot point.

And ultimately it just wasn't as interesting or engaging as the others.