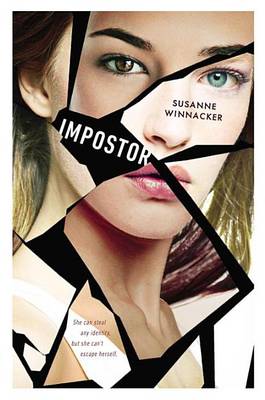 Training with a secret branch of the FBI, Tessa uses her shape-shifting ability to pose as a dead girl to catch a serial killer in a small Oregon town.

Impostor is a fun mash-up of Science Fiction and Murder Mystery. Tessa is a Variant, someone with a special ability. She can touch anyone, absorb their DNA, and then become them instantly. Of course, she's part of a secret government agency and is their prized employee because her ability is so useful. Especially now, because there's a serial killer on the loose and one of his victims survived, but barely. When Madison passes on, Tessa will step into her life, and the doctor on her case will pretend she made a miraculous recovery. Then it's up to Tessa to lure out the killer and stop him before he kills Madison. Again.

While I thought Impostor was a lot of fun, and it kept me entertained, I did have an issue with how Tessa's ability worked. Normally, it's great to have a detailed, science based explanation. However, I think that works against it in Tessa's case. She touches someone, and her body copies their DNA, makes it dormant, and she can all upon it later. That's super cool, except that she gets parts of their appearance that aren't even caused by DNA. Like the scar that the killer left on all of his victims, including Madison. It would have made much more sense if it was just a mimicry power: touch, memorize, and go!

Other than that though, I fully enjoyed Impostor. I was playing along with the mystery. I had two suspects and one was correct. I also really liked Madison's life. That's probably a weird thing to say, but she was an interesting person, and I like learning about her along with Tessa. That girl sure had some secrets! One of which got her killed! There's also a romance, but it's not really the focus. Tessa has a crush on another Variant, but he has a girlfriend, but he likes Tessa, too. There's tension. But what I really wanted was Tessa to end up with her brother! Well, not HER brother, but Madison's brother. That could have been interesting drama and tension! Girls wakes up from coma, is suddenly attracted to her twin...

Impostor was pretty great. It was really short though. I also feel like it could have made a great standalone, if it weren't for this introduction at the end to some rogue group of Variants. Everything was wrapped up quite nicely aside from that, but I am interested in what could come next, since Tessa is a hot commodity.

Read more of my reviews at Pinkindle Reads & Reviews.
3½ Stars.
http://www.divabooknerd.com/2014/08/impostor-by-susanne-winnacker.html
Not often does a book surprise me but Impostor was not only incredibly entertaining, but almost impossible to walk away from. It follows Tessa, she's barely been to school and never leaves the FEA compound, she trains to control her Variant ability. Tessa can infuse the DNA of others and take on their persona, great when you're trying to steal your first kiss posed as Alec's girlfriend, not so much when you're trying to lure a serial killer into the open before they strike again. Considering she's just been pushed into danger, Tessa takes it all in her stride, but Alec seemingly understands her better than she does herself and risks not only his own safety, but that of his relationship to protect the girl that has always simply been his friend.

It reminded me a little of the original Vampire Academy, only much more engaging and minus the instant love and overused tropes. It was unique and original and the storyline flowed beautifully. The intrigue of finding the killer felt a little lackluster at times, with Tessa more preoccupied with fending off attempts by Madison's former boyfriend at reuniting, trying not to see her brother Devon as more as simply Madison's brother and unraveling the secret that was on the verge of being exposed when Madison was brutally attacked. But underneath it all was a girl who struggles with issues of abandonment, coming of age and unrequited love.