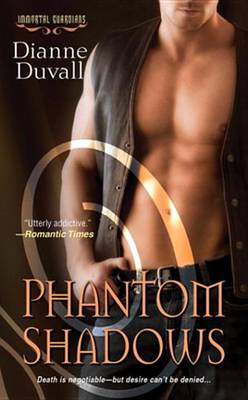 Dianne Duvall lures readers into a world of romance and suspense, where love can mean the difference between life and death. . .

Dr. Melanie Lipton is no stranger to the supernatural. She knows immortals better than they know themselves, right down to their stubborn little genes. So although a handsome rogue immortal seems suspicious to her colleagues, Sebastien Newcombe intrigues Melanie. His history is checkered, his scars are impressive, and his ideas are daring. But it's not his ideas that have Melanie fighting off surges of desire. . .

Bastien is used to being the bad guy. In fact, he can't remember the last time he had an ally he could trust. But Melanie is different--and under her calm, professional exterior he senses a passion beyond anything in his centuries of experience. Giving in to temptation is out of the question--he can't put her in danger. But she isn't asking him. . .


Phantom Shadows is the third book in the Immortal Guardian series and it took me on one heck of a ride. Riddled with action, suspense, romance and humour it kept me entertained from start to finish.

Phantom Shadows tells Bastien and Melanie’s story. The author introduced them at the start of the series, but I never envisioned them as a couple.

Bastien’s integration into the Immortal Guardians group was not a smooth one. When I first met him, he was on a mission to destroy the Immortal Guardians, as he believed they were evil. He lived for two centuries believing he was a vampire. Can you imagine his surprise when he discovered he was just like the beings he hunted?
He may be in the group, but he did not feel like he belonged. The majority of the members did not trust him and wanted to see him dead. Although he did not make it easy for them to trust him, with his abrasive and anti-social behaviour. Thankfully, the head of the group believed he could be redeemed and in the end he showed he deserved to be a member of the Immortal Guardians.

Bastien’s character was complex; there were many layers to him. I would not consider him a bad person, but misguided. He had a huge heart and a great capacity to love.

Dr. Melanie Lipton was an interesting character. She appeared in the previous installments, but she failed to make an impression until now. She saw the good in Bastien from outset. I admired her for her strength, intelligence, and forthrightness. She wanted to be with Bastien and she was not afraid to let him know it. She proved a worthy partner in the way she had his back.

I enjoyed hanging out with the couples from the previous installments. I also had a good time reuniting with the other members of the group. New characters were introduced and old enemies destroyed, which made me wonder what direction the series will take in the upcoming installments.

I loved the romance between Bastien and Melanie. It felt real, and I loved the pace at which it developed.
The action and suspense had me on the edge of my seat. The fight scenes were intense and riveting. There were some interesting outcomes. The banter between the characters had me laughing out loud quite a few times.

Narration
Once again, Kristen Potter has done an awesome narration. She did a great job with the variety of characters, both male and female. I enjoyed her pacing and tone for each scene.

Conclusion / Recommendation
Overall, an awesome listen and a great addition to the series. Highly recommend for fans of paranormal romance/urban fantasy

I have truly enjoy the Immortal Guardian series. Dianne Duvall has created such a fabulous world where Gift Ones, lead by Seth and David, fight to save humans from the evil clutches of vampires and those that would use them as weapons to gain world domination. Each story demonstrates how living hundreds of years could put a slant on how a Gift One would view the world and the job they do to save it, until they find the one person who makes them whole.

Given Bastien's confusion over who he was and his role in the vampires being used as a weapon, I was truly looking forward to his and Melanie's story. And while Bastien lived up to my expectation as far as how he was fitting in (or not) with the other Gift Ones and their seconds or how he worked tirelessly with Melanie to save Joe and Curtis, the storyline involving Emrys, his plot to create Super Soldiers and the Immortal Guardians efforts to take him down seemed rushed,at times jumped around and then suddenly, it was over. I wanted to know if Ami got her revenge or if Seth, David or Marcus did it for her. But instead that part of the book jumped ahead one month to a completely different storyline. It left me wanting more (more blood, more body parts...I don't know, but just more).

Back to Bastien. I really, really liked him. No matter how he ended up where he was, in his heart he was doing what he thought was right. Even when he thought he was a vampire, he took a higher road and in his warped sense of justice had his vampires taking out criminals rather than stalking innocent humans. He really was a man with a huge heart who needed a woman who could see past his misguided deeds to who he fundamentally was. Melanie saw that from the very beginning and was able to draw Bastien out of his shell and be the fun loving person he probably would have been had things not gone wrong hundreds of years before.

Overall, a solid installment in the Guardian series. I'm looking forward to see what the newest development with Ami and Marcus will mean for the Guardians and who exactly will be there next foe.
Bastian Newcombe has spent the past two centuries hating the Immortal Guardians. He believed that his pregnant sister was slaughtered, drained of her blood, and his brother-in-law forever changed into a vampire at the hands of a vicious Guardian. Then Bastian too was changed by his brother-in-law, a man he greatly admired, and who he watched descend into madness until he was murdered by the Guardian, Roland Warbrook, the same Guardian who Blaise said was responsible for his sister’s death.

Bastian had spent his time raising a vampire army to destroy the Guardians. An army that he fed with a list of known criminals and pedophiles. He had also been trying for centuries to find a cure for the madness that accompanies the human’s exposure to the virus that turns them into vampires.

And after two centuries of seeking revenge against Roland and the Guardians, Bastian finally learns that his entire life was a lie, that his brother-in-law murdered his sister before turning Bastian, and that Bastian was never a vampire. Bastian has the advanced DNA of an Immortal Guardian.

Now that his life has been turned upside down, he is attempting to join the Guardians in their quest to protect the humans from the maddened vampires, but not all of the Guardians are willing to forgive and forget two centuries of warring with Bastian, especially when Bastian was responsible for the death of one of their own.

But he is not concerned with making friends with the Guardians, he is happy to play the antagonist in this little group. Bastian is more interested in the Guardian’s attempts to find a cure for the vampire’s madness, and it doesn’t hurt that the doctor heading the research is the beautiful Dr. Melanie Lipton. Not that Bastian harbors any secret fantasies of Dr. Lipton, or maybe not many.

Dr. Lipton might ally with Bastian to allow him access to those vampires of his former army who are working with Dr. Lipton, but he knows that even that small regard she shows for him could endanger her standing with the Guardians and risks her high level clearance, since no one else is a fan of Bastian’s, especially the human head of security who wants to see Bastian removed from the Guardians, permanently if possible.

Melanie has been working with the vampires for some time now, and she hears them talk of their respect for everything that Bastian has done to help the vampires, and as an expert researcher, she easily observes the good man that Bastian tries to hide behind his wall of indifference. She won’t be easily waylaid by Bastian’s attempts to keep her away for her own good. She a big girl and she’s setting her sights on the gruff and gorgeous Bastian who hides his kind heart from the world.

Now an outside force has become an even greater threat than that of a vampire army. A black ops army is now armed with the first drug that can knock out an Immortal Guardian, and why they are trying to trap a Guardian is still not known. The Guardians will need to determine if Bastian’s suggestion that they need to work with the vampires to track down this common enemy is the best choice, and they will need to decide quickly before one of their own falls into the hands of this unknown enemy.

I can’t tell you how thrilled I am when a book that I have been anticipating turns out to be as incredible has I had hoped. I have had my eye on Bastian since we first see him as our antagonist in Darkness Dawns. He might have been raising a vampire army to destroy the Guardians, but he believed that they were responsible for as many deaths as the vampires. He may have kidnapped Roland’s love interest, Sarah, but he did it because he thought Roland was a danger to her. Bastian believed he was protecting her from suffering the same fate as his sister. Sarah being harmed in his kidnapping attempt was an accident and was as distressing to Bastian as it was to Roland. He was an antagonist with a heart of gold.

You have to love Dr. Melanie Lipton simply for the fact that like us she can see Bastian for more than the gruff exterior he shows to the other Guardians. She can see his kindness and thoughtfulness. She knows that when he killed the vampire patient Vincent, he wasn’t being vicious. He was giving a friend a chance to die before the madness progressed so far he would kill viciously and without thought. A fate the vampire feared most.

Melanie is intelligent and considerate, and she too sees the vampires for the humans they once were. She knows that they want to retain that humanity which is being drained away from them.

Dianne writes such interesting and touching characters with great stories and sweet romance and more than enough pulse-pounding action to keep you up reading until late into the night.

I am loving this Immortal Guardian series, and can’t wait to see if her next story can top my new book-boyfriend, Bastian. Feel free to start the series right here with Bastian and Melanie. You’ll keep up. But I know that before you finish, you’ll be ordering the first two anyway.

Received an ARC from the author. Thank you for another great story!

Check out our website on October 5th when we'll be interviewing the stars of Phantom Shadows.