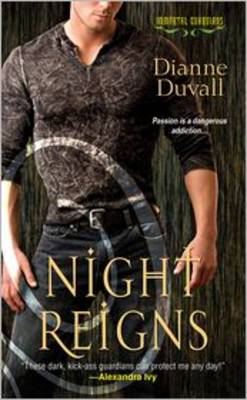 Dianne Duvall portrays a world of temptation, loyalty, and heartbreak. . .a world where danger and desire walk hand in hand. . .

Ami isn't much for trusting strangers. She has a hard time trusting anyone. But she's no coward, and she's no pushover in the protection department either. So when she comes across a mysterious warrior taking on eight deranged vampires on his own, she doesn't hesitate to save his bacon. Of course, that was before she realized what one little rescue would get her into. . .

Marcus Graden has been an Immortal protector of humanity for eight hundred years, and he's not interested in backup. From the moment Ami arrives in his life, he can't deny that she's strong, smart, and extremely skilled at watching his back. But she's also destroying his protective solitude and stirring desires he can't bear to awaken. After all, whatever her secrets--how can she defeat death itself?

I got my first taste of Dianne Duvall’s work when I read Darkness Dawns. The story and the characters captivated me and I knew I had to pick up Night Reigns. My experience with book two may not have been great as it was with the previous book, but I still enjoyed it. I enjoyed spending time with the characters and was disappointed when the story ended.

This installment tells Marcus and Ami’s story. We were first introduced to Ami and Marcus in book one. From the outset, Ami piqued my curiosity as to her identity and the role she would play in the series. Marcus, an 850-year-old immortal is in mourning the loss of the woman he loved. He is not interested in a relationship or working with a second. Therefore, when Seth, the leader of the Immortal Guardians assigned Ami has his second he was not amused.

Ami proved an excellent second for Marcus. He attempted to push her away, but she stood her ground, never once failing her duty. She took her job as a second serious. The more time Marcus spent in her company he realised she could hold her own and that her fighting abilities were incomparable.

Ami’s character was shrouded in mystery. Neither mortal nor human, but she possessed vampire and immortal abilities. I kept wracking my brain trying to figure what she was, but I never did. The revelation when it came was shocking as I never saw that one coming. Who would have thought? I loved her resilience. She survived months of torture and is slowly reclaiming her life. Despite her deep-seated fears of labs and doctors, she willingly risked her life to protect Marcus.

I had hoped to get some more insight into Marcus’s character, but I was disappointed with his portrayal. He did not receive the same amount of attention as Ami’s character. I received a taste of his history, but it did not live up to my expectations.

The story moved at an even pace. I loved the new developments. Now that Bastien was no longer a threat to the Immortal Guardians, there is a new enemy in town. One who is determined to kill all Immortal and reign over the vampires. Non- stop action sprinkled with a hot romance and a pinch of humour help to make the story captivating. I received some interesting tit bits about the immortals and I am curious to learn more, especially where the leader is concerned.

The ending left me wanting more. The non-romantic element of the story was not resolved leaving me with many questions.

NARRATION
I have limited experience with audio books and I am not acquainted with many narrators. This is my second time listening to Kristen Potter and I would definitely listen to any story she narrates. I enjoyed every moment, and she helped to enhance the story. She switched between characters effortlessly, making it easy to identify which character was speaking. I enjoyed her sound effects, from the ringing of the doorbell to the vibrating of the cell phone.

Conclusion/Recommendation
I found this to be a great addition to the series. I am curious to learn more about these fantastic characters. If you have not read this series, and are a fan of paranormal romantic suspense, then I recommend that you do so as soon as possible.
This was a swoony PNR!
This story rocks! I couldn’t put it down and finished it in one day.

When I started this story, I thought it was very reminiscent of the Sherrilyn Kenyon’s Dark Hunter series. That is in no way a complaint. I LOVE the Dark Hunter series. This series features Immortal Guardians, with the help of their network of human Seconds, they protect the humans from the vampires. The Guardians and the vampires are both infected by the same virus, but while some who are infected start to loose their hold on their sanity and become vampires, the Immortal Guardians were gifted ones whose gifts are enhanced by the virus and they are not destroyed by it. As the vampires lose hold of their minds, they become more and more violent and fly into rages. The Guardians are then forced to destroy them.

This is book 2 of the Immortal Guardians series. I haven’t read Book 1 yet, but I will very soon.

Definitely give this series a try!

See more at http://ebookobsessed.com
Look for review on Romancing the Book