Out in Blue (Return to Sanctuary, #1) 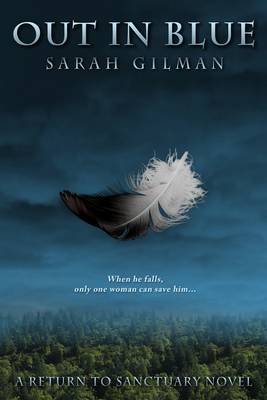 Out in Blue (Return to Sanctuary, #1)

In a violent world where fallen archangels are hunted for their valuable plumage, Wren knows one thing for certain: the human woman who saved him from a poacher attack will die if she stays with him. The demon responsible for his parents' gruesome deaths two decades ago pines for the chance to rip apart any woman who stands under Wren's wing. Wren doesn't expect Ginger to stay by his side once she discovers his ability to drain life with a mere touch, yet she lingers. When an unusual talent of her own reveals the location of Wren's father, Wren's isolated world implodes. With the help of the demon protectors he's sworn never to trust again, Wren risks everything to rescue his father, confront the demon who stalks his and Ginger's every step, and claim his eternity with the most courageous woman he's ever known.

I love this series and I loved this book! This is the first book in the series, following Wings of Redemption, a novella that introduces us to the world the author has created. Archangels are hunted by humans for their feathers, and viewed as evil. Demons and archangels are bonded together, living in colonies away from human society, struggling to survive in a world that abhors them. Relationships with humans are generally tenuous at best; trusting them is difficult to do. For Wren, trust itself is an issue, as the very demon who was sworn as Guardian to his family betrayed them by murdering his parents. Ginger has her own history and secrets and all obstacles stand between them.

Things to love about Out In Blue...

---Wren. His story was so tragic that you just wanted to hug him and make everything all better!
---The twists and turns. I loved that the entire story line was completely unpredictable. I never knew where it was going and was surprised every time I found out.
---Jett. This is a character with some serious mystery and history. He's a combination of badass and wounded soul. We will learn more about him in the next book!

My recommendation: A definite must read! You can read this without having read Wings of Redemption, but I would definitely recommend reading that one, too. The next book, Deep in Crimson, comes out in September 2013.
I'm not a big reader of angel and demon books, but the cover hooked me and I decided to give it a try. I'm glad I did. The author took a very unique twist on the world of archangels and demons that made the story very interesting and kept me on the edge of my seat.

Wren is an archangel/human hybrid who's been in hiding over the past ten years since his parents were murdered. It's been a lonely existence but one he's been forced into over the fear of being found by the guardian who swore to protect his family but killed them instead. He doesn't trust anyone for fear they're either involved with poachers trying to rid the world of archangels and demons or his own kind that might shun him because of his unique gifts. So Wren was surprised when a human woman reaches out to save him when the poachers find his newest hiding place. Ginger's willingness and selfishness in helping Wren

Wren broke my heart, just a little bit, in this story. He was on his own for eighteen years and always made to feel like he was a lesser person, even by his own family. I loved how even though he truly didn't trust anyone, he found that he could trust the human woman who saved him.

I enjoyed this read and can't wait for the next Sanctuary story.