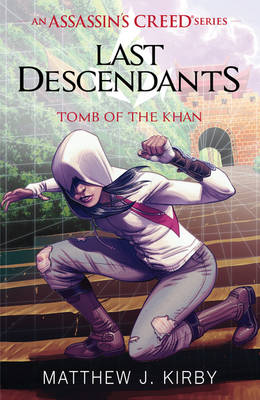 Official fiction based on the Assassin's Creed game!

As the second book in the Last Descendants trilogy begins, Owen and his friends have lost.

When they located the first piece of an ancient and powerful relic long considered a legend —the Trident of Eden—it seemed little could stop them.

This piece was sought by the Brotherhood of Assassins and the Templar Order, but before either organization could take the piece, it was stolen by an unknown third party.

The relationship between the teens fractured - Owen and his friend Javier taking sides with the Assassins, the others with the Templars.

Now there are still two pieces of the Trident of Eden to find, and both are determined not to repeat their mistakes. The next piece is said to have been buried with the Mongol
warlord Mongke Khan, whose tomb has never been found.

Teens on either side of the conflict will have to go into simulations in war-torn Mongolian China in a race against time to discover the next piece, and ensure their safety before
their enemies find it first.

The thrilling second book in the trilogy based on the Assassin's
Creed game.