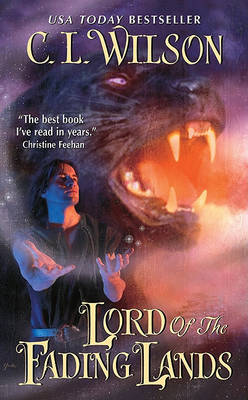 Once he drove back the darkness.
Once he loved with such passion his name was legend.

Once, driven wild with grief over the murder of his beloved, the majestic Fey King Rain Tairen Soul had laid waste to the world before vanishing into the Fading Lands. Now, a thousand years later, a new threat draws him back into the world—and a new love reawakens the heart he thought long-dead.

Ellysetta, a woodcarver's daughter, calls to Rain in a way no other ever had. Mysterious and magical, her soul beckons him with a compelling, seductive song—and no matter the cost, the wildness in his blood will not be denied.

As an ancient, familiar evil regains its strength, causing centuries-old alliances to crumble and threatening doom for Rain and his people . . . he must claim his truemate to embrace the destiny woven for them bock in the mists of time.

I love finding new authors to read from, especially during a Reading Challenge. Lord of the Fading Lands is the first book to C.L. Wilson’s Fantasy Romance series called Tairen Soul. I came across it while looking for a book to fulfill the Journey’s End square for the #Romanceopoly2020 Challenge. I wanted to give it a try, and I’m glad I did. I love both Fantasy and Romance and couldn’t wait to dive into this book.

The first book introduces the main characters, Ellysetta Baristini and Fey King Rain Tairen Soul, to the storyline, and C.L. Wilson does a fantastic job of building the world for readers. I literally could not stop reading this book because I needed to find out what happened next to the characters.

Ellysetta is the woodcarver’s daughter in the story, but she’s not biologically his daughter. She was adopted, but the woodcarver and his family love her as their own. They are very protective of her and want her to be married right away to someone Ellysetta doesn’t want to marry. One night she ends up calling for the Fey King Rain Tairen Soul when she is in distress. Her soul beckons for him. Rain never expects to find his true mate. He hasn’t visited Celiera where he finds his true mate, after a thousand years. He’s determined to protect her and knows she will be targeted now by the dark mages due to her being the Fey King’s true mate. The dark mages who supposedly have not been seen in a while are brewing up trouble in Celiera, but no one believes the Fey. Rain is determined to make his case about the dark mages, and it takes his true mate getting hurt to make others realize how dangerous it is.

I enjoyed the first book of this series by C.L. Wilson. I’m going to pick up the second book in the series when I can squeeze it in between other books I need to read and review. I loved getting to explore this world that C.L. Wilson has created for her characters. Rain is not someone to mess within the book, and Ellysetta may seem ordinary, and everyone calls her plain, but she’s anything but that in this book. There were times that Rain drove me crazy with the way he acted with Ellysetta in the book, but I knew why he did after a while. I liked getting to know the other Fey that protected Ellysetta too. There’s one character in the book I can’t stand, and she happens to be the Queen of Celiera. She drove me bonkers with how she treated Ellysetta and the Fey. I’m glad the King put her in her place a couple of times.

If you are looking for an epic fantasy novel that involves Fey, dark mages, and magic, then this book/series is for you.

I think I expected something more climactic at the end, but no matter, I'll just keep reading. :D

Loved. ♥
Rubbing my hands together in glee...

Within minutes of starting the audio of Lord of the Fading Lands, I knew I was in love. My heart started fluttering, I was looking around wanting to share my glee and smiling like a loon with love for a new EPIC series. Yes, it probably seems a little extreme since I had only been listening for a couple of minutes, but sometimes, you just KNOW.

Well, I was right and I BLOODY LOVED IT!!

The characters came to life, the storyline was riveting and the promise of a true mate kind of love had me desperate to use every minute I had spare to listen. I even stood at the door to work contemplating turning around. I didn't, but it was a close call.

This was the start of the series and I know I will definitely be reading or listening to each instalment. The good guys need to fight the bad guys. The heroine is coming to realise that she has magic in her but doesn't have any idea how much or how to use it. There are court intrigues, cattiness and posturing, mixed with the usual, my jewel is bigger than yours.

I'll be honest, at the end of the story, my head shot up in shock. I had no idea that I'd reached the end. It seemed to just come out of nowhere. It's just a wee bit of a CLIFFHANGER!! Well, sorta-kinda...cliffy, more like...we've given you a lot to take in, how about a recess to let your heart rate go back to normal.

I think the narrator does a marvellous job. Her voice was easy to listen to and very clear and I would not hesitate to listen to her narrate again.

If you're a fan of paranormal/fantasy romance, I highly suggest giving Lord of the Fading Lands a try. For that matter, I highly recommend C.L. Wilson, as her stories, the ones I've read so far, are exactly what I look for in this genre.
A young woman finds love with a fey prince, but it could cost her life.

I enjoyed the novel. The author spent time developing the romance between the two main characters despite the "insta-love" story line. I greatly appreciate any time depth is given to characters despite their circumstances. However, this novel took me six months to read. It was really too easy to put down. My problem with it is threefold - the pacing, the world-building, and the plot. The pacing was really slow during the middle of the novel. Instead of building the political and social movements concurrently with the romance, the author spent time developing each separately during the middle of the book. While building the romance was important, reading about each day of their courtship became tedious fast.

My other big problem dealt with the world-building, particularly the magic system. Magic is literally the cure for everything. Need clothes? Magic. Did you get physically injured? No worries, magic. Want to have a private conversation in a crowded room? Magic the shit out of it. If the author is going to have a magic system that literally can accomplish anything, I need magic to cost the characters something. Magic should MEAN something to the characters, and not just be a convenient way to accomplish a task.

tl;dr A flawed, yet enjoyable, fantasy romance. First time fantasy romance readers should read Snyder's Healer series instead.
i picked this up after ashley raved about the series, which i believe she compared to sarah j. maas’ [b:A Court of Mist and Fury|17927395|A Court of Mist and Fury (A Court of Thorns and Roses, #2)|Sarah J. Maas|https://d.gr-assets.com/books/1452783825s/17927395.jpg|25126749] (i think we all know how i feel about that). i get the comparison, but it was not the same for me and lord of the fading lands fell short:

1. the insta-love was too much to take, making the romance pretty unbelievable
2. everyone is SO stereotypical - the heroine doesn’t realize her magical abilities, she’s shy and inexperienced, she’s big-hearted, etc., while the hero is terrifyingly powerful, etc. etc. etc.
3. the conflict feels very watered down - wilson heavily hints at plots to come in later books but does not flesh out this book’s conflict
4. i haven’t read the rest of the series (and don’t know if i will), but i highly, highly suspect this should have been part one of a longer book

seeing as this did not do anything original and missed the mark for me, i’m not sure i’ll continue. that being said, i did enjoy reading it and being 1/5 through the storyline might break me…i do want to find out what happens!
Don't get me wrong, I enjoyed it a lot and it delivered. My only problem at the end was a feeling of 'And that was it?'. I guess because I didn't really see a defined plot. Of course each page of this book drew me in, but I was waiting for it to build towards something, anything. But at the end I didn't feel there was a really a climax. I'm hoping to see struggles in Ellie's and Rain's relationship in the next books.
Jan 2018 = 4 stars
Jun 2016 = 4.5 stars