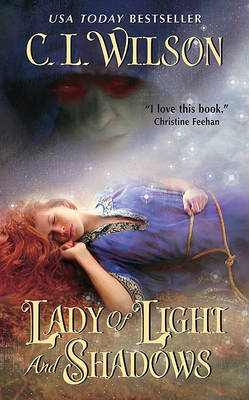 She feared the dark visions and the magic within her.
And she dreamed of the miraculous love that could save her.

Like an enchanted fairy tale prince he stepped from the sky to claim her—the Fey King, her destiny, her one and true love. But behind the mesmerizing beauty of Rain's violet eyes Ellysetta saw the passionate hunger of the beast . . . and a sorrow, deep and ancient, that she alone could heal. Only for him would she embrace the frightening power that dwells within her. Only with him at her side coudl she confront the shadows that haunt her soul. For an epic battle looms on the horizon—and only united can they hope to turn back the armies of the darkness.

Possibly even better the second time around. ♥
It's all a matter of trust...

Bloody Hell!! Lady of Light and Shadows was a lot harder to follow than the first one. I think I've spent the whole time with my eyeballs just about jumping out of my head. My train trips were filled with listening to this story and becoming completely oblivious to my surroundings. Luckily, no mishaps occurred, but I think my body was on auto-pilot.

There's A LOT going on. Trust needs to be secured between Elysetta and Rain for their true-mating to be whole. Elysetta must learn to trust her guards, The Quintet so that she feels safe and they can guide her to safety if a need arose. This story's main focus is centred around a lack of trust between the Fey, Tairen Soul and the Celerians, as the Mage infiltrates and misleads the people. So basically, TRUST is the big issue in Lady of Light and Shadows.

Honestly, I didn't know who to trust and I was thinking Ellie should just tell them all to take a hike. I hated her family for what she put Ellie through...but then I got over it. I hated Rain for his lack of faith in his true-mate...but I got over that too. I even hated The Quintet for 2.5 seconds...because they fell down on the job. I hated her best friend, the smelly butcher's son, the Queen and her entourage, the King and the stupid Lords...ALL OF THEM NEEDED TO BUGGER OFF!! My head was spinning with all of the lies, manipulations and misunderstandings. I HATED THE MAGES!!

But, I ended on a high. I loved that Elysetta found her strength and started to follow her own path instead of the one made for her. I hated that she forgave Rain so easily when he turned his back on her. Rain was the one person she was meant to trust with her whole heart, and he walked away.

Rain, you've still got a wee bit of work to get back into my good graces.

I really enjoyed Lady of Light and Shadows. The pacing was OK for me, the narrator does a good job and I was desperate to get back to listening whenever I could. It wasn't as good as the first, but it was still bloody good.

Sorry, if this was a little mumbly jumbly, but I suppose, that was how I felt through most of this story. Maybe, I should have read this one instead of listened, which may have made it easier to follow. But, I kind of can't resist listening to an EPIC fantasy/paranormal, it makes it easier to watch the movie going on in my heads...and now I sound like a loony. I give up.