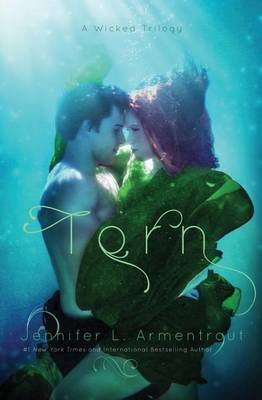 TORN BETWEEN DUTY AND SURVIVAL, NOTHING CAN BE THE SAME.

Everything Ivy Morgan thought she knew has been turned on its head. After being betrayed and then nearly killed by the Prince of the Fae, she’s left bruised and devastated—and with an earth-shattering secret that she must keep at all costs. And if the Order finds out her secret, they’ll kill her.

Then there’s Ren Owens, the sexy, tattooed Elite member of the Order who has been sharing Ivy’s bed and claiming her heart. Their chemistry is smoking hot, but Ivy knows that Ren has always valued his duty to the Order above all else—he could never touch her if he knew the truth. That is, if he let her live at all. Yet how can she live with herself if she lies to him?

But as the Fae Prince begins to close in on Ivy, intent on permanently opening the gates to the Otherworld, Ivy is running out of options. If she doesn’t figure out who she can trust—and fast—it’s not only her heart that will be torn apart, but civilization itself.


AHHHH SO GOOD! Dying to move on to Brave! Here I goooo!
Love Tink! This was nice addition to this series but it is not enough to make me want to continue reading. Maybe I am burned out on fantasy but I am just not that into this story. Meh.

FIRST THOUGHTS
Sigh ... reading a book by an author you love and now we must wait a year for the next one! I don't know about you, but if Drake wasn't so psychotic, I'd be okay with him ;-)

Ah yes, book 2 in the Wicked series is complete! And there's just more questions, some new information about the fae world, plus The Prince brings a whole new meaning to creepy.

We've got the group all back together and Torn was just full of twists and surprises. And we get to see Ivy's vulnerable side even deeper than we witness in Wicked. The book picks up right where the last one ended, so I was quite thankful that too much time didn't pass between both books.

Ivy faces so much in this, dealing with her new reality of what she is, the betrayal of her best friend, trying to avoid The Prince at all costs, and keeping secrets from the one person who could literally break her if all is revealed.

The fae world in this trilogy is definitely intriguing me completely. In Wicked, we view them as the bad guys, ones you can't trust and who just want to suck the life out of you. In Torn, we learn more about faes, well another side to them. And the reality that not all of them are bad! Talk about plot twist and I'm just dying to know more.

OK, now let's talk about The Prince, which we definitely know his name, but I'm not going to spoil that because I'm loving it. Yes, he's downright creepy and he needs to work on how he says…certain things. But I can't quite pin my finger on him, I don't exactly hate the guy. I should because he's definitely a deadly arrogant/a**hole, but I have a hunch that he isn't entirely bad. However, I'm probably crazy and have him totally wrong.

I'm still completely hooked on this series and will be diving into Brave right away. Absolutely can't wait to read the conclusion, although I'm a bit nervous since I have no idea how everything will play out.
This review was originally posted on Cocktails and Books

Oh JLA how you weave such a splendid paranormal tale.

TORN picks up immediately where WICKED ended (yes, you must read WICKED first.  But trust me, you absolutely won't mind jumping into JLA's Fae-infested New Orleans).  Ivy is trying to pick up the pieces after her first confrontation with the Fae Prince and the betrayal of her best friend.  She's not sure who to trust, but she knows she must stop the Prince from his creating his apocalypse baby and save our world from being taken over by the Fae.

Ren is the one person Ivy really wants to trust.  She has deep feelings for the Elite member, but she's scared that once he finds out what she is that she'll lose him.  Ivy isn't alone in those feelings and Ren will pretty much do anything for her.  But they don't easily come to that conclusion and they have an enormous obstacle to overcome once they're in a place to discuss what happened.  JLA has this knack for giving her awesome couples seemingly insurmountable obstacles that test the strength of their relationship.  The same holds true for Ivy and Ren, but when they come out the other side there is absolutely no doubt that will overcome whatever obstacle they have yet to face.

I can't wait to see what happens next with this series.  Everything Ivy was taught to believe has been turned upside down and those that she thought were enemies may not be.  I'm sure it'll be a fantastic showdown.

If you loved what Jennifer L. Armentrout did with aliens and Greek Gods, then you must pick up this series.  You can't put it down.
pretty darn good. somewhat predictable but loved that there was emotional healing that didn't involve sex. sometimes a person just needs to be held, not fucked.