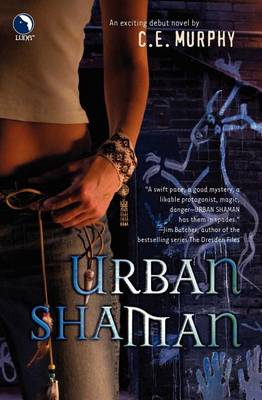 Joanne Walker has three days to learn to use her shamanic powers and save the world from the unleashed Wild Hunt.

No worries. No pressure. Never mind the lack of sleep, the perplexing new talent for healing herself from fatal wounds, or the cryptic, talking coyote who appears in her dreams.

And if all that's not bad enough, in the three years Joanne's been a cop, she's never seen a dead body--but she's just come across her second in three days.

It's been a bitch of a week.

And it isn't over yet.

Urban Shaman contains an interesting mix of Celtic gods and Native American dream-walking, which worked a lot better than I thought it would. Joanne Walker is half Irish and half Cherokee, but she doesn't really believe in the lore from either side of her heritage. That is, until she sees a woman being chased by dogs and a man with a knife. Joanne has this overwhelming need to help the woman, so she tracks her down, and is thrust into the paranormal world. The woman, Marie, is being hunted by The Hunt, unless someone can stop it. That someone, of course, ends up being Joanna once her shamanic powers are awakened during a near death experience.

I really liked the beginning of Urban Shaman, even if I thought Joanne was a bit crazy. She sees the running woman while her flight is descending, then has to estimate how far away from the airport she is, and then hire a cab to drive all over town to find her. The trouble was worth it in the end, since she made a new friend in her cab driver, and learned more about herself in the process. I also loved how Joanne didn't know anything about her abilities at all. Normally in adult Urban Fantasy, the heroes already know all about what they can do and then it's put to the test. Well, here we get to learn right along side Joanne, which I enjoyed.

I would have rated Urban Shaman higher except that the last few chapters kind of lost me. I had liked reading about Joanne researching Celtic gods and shamans, so she can figure out what was going on, but then once things started coming together, it became jumbled. She goes to Babylon, but it's not really Babylon, since it's in the dream world, and from there I got mighty confused. I honestly can't explain what went down after that, except that Joanne somehow saved the world. At least for now.

So other than that confusing ending, I thought Urban Shaman was great. I adored Joanne, since she's different, although not all the way into special snowflake territory. I loved Gary, her cab driver buddy! Is it wrong of me to want a romance between them? Probably, and I'm sure it won't happen, but a girl can dream!

Read more of my reviews at Pinkindle Reads & Reviews.
This is the first book in the series and I enjoyed it. It had action, it was funny and still had a bit of mystery to it. I like the main character Joanne and she is not an annoying character at all. The book moved quickly and is definitely a page turner.

Overall it's just a feel good read.
Listening to audiobook

I just couldn't get into the characters. I tried and made it about 3/4 of the way through. I had to stop when I noticed myself not paying attention in the lest. Something would come up and I was like "what is going on" and it was because I wasn't paying attention. I had to back the audio up three times in three different places before I finally said, "I quit".