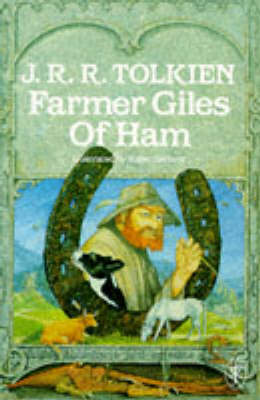 A Collection of short stories: Farmer Giles of Ham, Smith Of Wootton Major, and Leaf by Niggle

Farmer Giles of Ham is one of Tolkien's most popular stories, full of wit and humour, set in the days when giants and dragons walked the earth. He did not look like a hero. He was fat and red-bearded and enjoyed a slow, comfortable life.

Then one day a rather deaf and short-sighted giant blundered on to his land. More by luck than skill, Farmer Giles managed to scare him away. The people of the village cheered: Farmer Giles was a hero.

His reputation spread far and wide across the kingdom. So it was natural that when the dragon Chrysophylax visited the area it was Farmer Giles who was expected to do battle with it!

Two further stories in this collections are Smith of Wooton Major which tells of the preparation of the Great Cake to mark the Feast of Good Children, and the strange events which follow, and Leaf by Niggle, which recounts the strange adventures of the painter, Niggle.