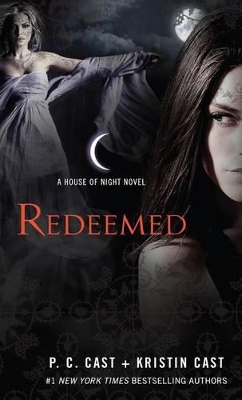 In the final electrifying novel in the HoN series, Neferet has finally made herself known to mortals. A Dark Goddess is loose on Tulsa and the world. No single vampyre is strong enough to vanquish her - unless that creature has the power to summon the elements as well as the ability to wield Old Magick. Only Zoey Redbird is heir to such power...but because of the consequences of using Old Magick, she is unable to help. Find out who will win and who will lose in this epic battle of Light versus Darkness.

The House of Night series is an international phenomenon. With more than 12 million copies in print, rights sold in thirty-eight countries to date, and relatable, addictive characters, this series is unstoppable. Now, in the final instalment of the series, Zoey and her friends face the ultimate battle with evil which will determine the fate of the world, both human and vampyre.

CAUTION! THIS REVIEW MAY CONTAIN SPOILERS! READ AT YOUR OWN RISK IF YOU HAVEN'T READ THE BOOK ALREADY!!!!!!!

The last book from the House of Night series. All I can think of is finally it is done and I read some other reviews last night before I bought the book. They all I noticed had bad reviews about the book saying that it was boring and the battle was cut short and a bunch of other things.

Now that I have finished this book I gotta say that all of those stupid filler books led up to a good book at the end of the series. I mean I know in my inner editor that the Casts could have made this book series not lasted as long as they made it to be. The things that I liked about this book is that Zoey is able to stop being a babbling idiot of a teenager that the Casts made her out to be, Kalona finally went back to Nyx which made the two immortal gods very happy, Aurox self-sacrificed himself to keep Neferet imprisoned, and finally Neferet had been defeated.

Though the whole thing that I can't help but think that yeah Kalona was defeated the same way by A-ya and the Cherokee Wise Woman. So I can't help but think that Neferet will probably get out the same way that Kalona did. I also hated the fact that Thanatos had to die as she was such a fabulous character. The afterward part and other things are quite good. I actually didn't think that I would love this book but I did. Especially since I had high expectations for this book and it actually kind of passed all of them.

To read my other book reviews please look at my site:: baronessbooktrove.blogspot.com
Amazing ending to the House Of Night series. This series has been with me since I was 9th grade (2008) and I fell in love with it instantly. It is very long, which I had trouble with and at times, I wanted to stop reading the series but I am glad I never gave up. This book did justice to the whole series.

It is definitely worth it to read the series once again. So many events happen in this book, different points-of-views in third person... And can I just say, I LOVE Kalona. Nyx and Kalona are my OTP along with Stevie Rae and Rephaim (yes, i have two OTPs).

Be sure to stay tuned to my YouTube channel for a review. I already recorded the video. It will go live this weekend :)