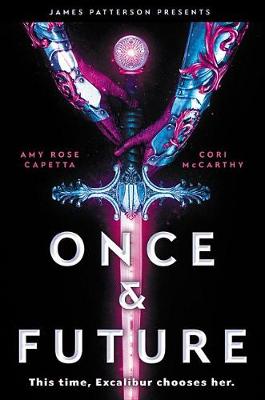 Coming to terms with your identity is always difficult. But for Ari, the 42nd reincarnation of King Arthur, it just got a whole lot more complicated. Gender-bending royalty, caustic wit and a galaxy-wide fight for peace and equality all collide in this epic adventure.

With an awkward adolescent Merlin and a rusty spaceship, this is the Arthurian legend as you have never before seen it.

Since her rescue in the cold, infinite depths of space at seven years of age, Ari Helix has been considered an illegal young woman and a Ketchan native denied refuge. Her adoptive mother's have been arrested for harbouring a criminal and sentenced for their crime by the Mercer Corporation, a company of vast consumerism, commercialism and the monopoly throughout the galaxy since the environmental destruction of Old Earth. Now Ari and her adoptive brother Kay are fleeing the Mercer Corporation authorities, planing to take cover on the abandoned Old Earth planet until Ari realises that not only are Mercer conducting deforestation but she finds an old sword, saving it from an ancient gnarled tree.

Meet Ari Helix
Each new cycle, the infamous King Arthur is reincarnated yet with the same overwhelming quest, save the world and unite humanity. Like the forty one Arthur's that have gone before her, Ari is the latest reincarnated Arthur destined for greatness and the first female Arthur. I loved Ari, she's essentially an illegal refugee from a Middle Eastern society on a planet that was isolated from the galaxy and civilisation. A planet where Dragons haunt the nightmares of children. Ari remembers little of her young life before being rescued by now adoptive brother Kay and his mothers, now her mothers. Kay's family have hidden her from Mercer authorities until the point of their capture, now Kay and Ari are on the run with a prayer and a promise to keep his sister safe, despite her brash determination and dangerous bravery.

Kickass Sidekicks
The side characters are bloody magnificent. Kay fluctuated between loving brother and a bit of a prick at times, which only added to the authenticity between the brother and sister relationship. Ari's futuristic Knights are all brilliantly developed. Siblings Lam and Val are wonderful. Lam is fluid using them and they pronouns while Val is gay and very much into Merlin. Merlin has been Arthur's sidekick and adviser for over forty cycles and although he begun the journey as an old, grumpy wizard, with each cycle failed, Merlin has been ageing in reverse. Now at seventeen, this is his last attempt to help the latest Arthur succeed before tapping out. On the plus side, Merlin will no longer be cursed but after decades of pining away for friendship and finding love, I'm stanning Merlin and Val.

Representation Y'all
If I had limited characters to describe Once & Future, it would be girl King Arthur and queers in space. That right there is enough to lure most readers in. In Ari's universe, love knows no bounds. People love who they choose, live as they choose and express their sexuality however they choose. Ari is pansexual. We have characters who are gay, bisexual, fluid, asexual and using them and they pronouns. Straight is no longer the default in a world without gender assumptions and it's bloody brilliant! Ari herself is an illegal refugee from the planet Ketch, founded by Arab settlement that has been isolated and segregated from the rest of humanity. I love authors that weave in a little salt throwing at western governments who treat asylum seekers like shit.

Once & Future is also an own voices novel. Amy Rose Capetta identifies as a queer demigirl and Cori McCarthy uses they and them pronouns, identifying as an Irish Lebanese American as well as a pansexual demi enby. While it's wonderful to promote diverse reads with main characters from marginalised backgrounds, supporting own voice authors is incredibly important.

It Was Really Good... But
The first half was adventurous, mysterious and sassy. Lots of character banter disguising the sexual tension between characters. Merlin and Ari begin to form a wonderful bond before they're again separated and then the storyline begun to feel disconnected. It did allow Ari to mature as a character during the time lapse chapters but overall, the second half felt a little lacklustre.

So What's The Verdict?
Give it a read. After a frantic beginning, Once & Future is shaping up to become a pretty epic series. Wonderfully diverse and character driven, it follows the original tale of King Arthur and Merlin but rather set in space, fighting against big corporation oppression and greed. There's mention of historical genocide, so tread carefully friends but overall, a sassy and spunky retelling of the legend that is King Arthur.
I was sent this proof for free by Rock the Boat for the purposes of providing an honest review.

I can't tell you how excited I was when I first heard about Once & Future by Amy Rose Capetta & Cori McCarthy, a queer, gender re-imagined, sci-fi retelling of King Arthur. It just sounded incredible! But unfortunately, I was quite disappointed. To be fair, though, I think it was more that I am the wrong reader for this book than that it was a bad book, a mismatch.

Ari is an illegal immigrant from Ketch, a planet that Mercer - the tyrannical corporation that controls everything - shut the planet off for dissidence and speaking up against Mercer. She was found when she was seven-years-old by Kay and his mums, and she has been hiding with Kay ever since. But when she accidentally alerts Mercer to her location, she and Kay have to run pronto, and end up on Old Earth, the retired planet humans left, a planet that is respected and to remain untouched, but they discover is actually being destroyed by Mercer. While there, Ari pulls a sword out of a tree - Excaliber. Doing so wakes up Merlin, who seeks Ari out as they try to hide from Mercer. He throws a spanner in the works when he tells her that she is the 42nd reincarnation of King Arthur, and it is her duty to defeat the greatest evil in the world.

A lot of my issues with the book are down to my personal taste, and Once & Future just wasn't it, unfortunately. It's meant to be quite comedic, with humour woven in throughout. I just didn't find any of it funny; rolled my eyes too many times to count, and in the end I actually found it all really annoying. My other issue is that everything happened and was over so quickly, that until maybe the last third of the book, it felt like nothing much was really happening. It moved so quickly; too quickly for me personally to form emotional attachments to the characters.

There's not much in the way of development in Ari and Gwen's romance, because it's a continuation of a romance that started before the book began, albeit years ago in the book's time line. Plus there's the fact that everyone accepts Merlin and what he tells them regarding Ari being King Arthur, and everyone she knows being her knights, the whole "save the universe" malarkey far too quickly. There's very little in the way of disbelief, denial, doubt, questioning, or, "Why me/her?"

And then there's the fact that I couldn't stand Merlin, which is a problem considering Once & Future is told from both his and Ari's perspectives. Merlin is the character I was most excited to meet. Merlin is meant to be this venerable, wise wizard (he prefers magician, but magicians pull rabbits out of hats, so wizard it is) and he's anything but. All I know about the King Arthur legend is from Disney's Sword in the Stone and the TV show Merlin, so I didn't know about Merlin's backwards ageing. But even so, he was once an old man, wise and smart, I don't see why his body now being that of a teenager would have an effect on who he is. He would still have all his life experience, he would still be smart and wise. But instead, we get an awkward, gawky, easily embarrassed idiot for an excuse of a wizard. Mate, Merlin simply wouldn't make the mistakes that he does. At times, he's more trouble than he's worth, really. And to be honest, other than the occasional bought of magic that saves everyone's skin, he doesn't really do much. He's meant to train the latest Arthur and prepare them for their role, and he keeps going on about it, but he doesn't really do any of it. He was such a massive disappointment. Merlin has his own romance with Val, Ari's best friend, but even that left a lot to be desired. You have Val being all smooth and cringey, and Merlin blushing all over the place, and practically falling off his chair because Val's hand brushed his. It was exasperating.

The only character I really liked was the character I loved to hate; the Administrator of the Mercer Corporation. Mate, he was so sinister! He was cruel, and seemed to delight in hurting and breaking others, but acted friendly and jovial, and he was so messed up - I loved it! I do wish we had more of him on page, or got to see him act upon his threats a little more. And Mercer, the corporation itself, was just brilliant. A corporation that holds the monopoly on everything you could possibly need to survive - food, water, oxygen, etc. - and also everything you could possibly want, who withholds everything from you, if you don't do what they want. It was pretty genius, really. But yeah, the Administrator and Mercer were all that brought about reactions from me that I would expect.

A massive plus for Once & Future is how diverse it is. Lam identifies as fluid, and uses they/them pronouns. They and their brother, Val, have dark brown skin, and Lam also has dreadlocks. Ari is from Ketch, whose people Merlin surmises are descended from Arabs on Old Earth, because the language Ketchan is Arabic. Gwen is of mixed Asian and European heritage, also noted by Merlin. There are very few labels given in regards to sexuality, as the universe seems to be one where labels aren't needed, but there are a lot of queer people in this book.Val and Merlin are attracted to men, Gwen is attracted to men and women, and Ari is with Gwen, but had a crush on Lam, and Kay and Ari were brought up by their two mums. Lam and Kay are attracted to women; they may also be attracted to other genders, but we don't see that in this book. There is also a character who is asexual - "ace" on page - and I assume, from what they say, also aromantic, but I'm not saying who, because it would spoil a specific element of the King Arthur legend in this retelling. But Once & Future is so diverse, and it's wonderful!

Obviously, Once & Future wasn't for me, sadly, but it a number of people have really enjoyed it, so do read some other reviews before deciding whether or not to read it.

Thank you to Rock the Boat for the proof.