Daughter of the Moon Goddess (The Celestial Kingdom Duology, #1) 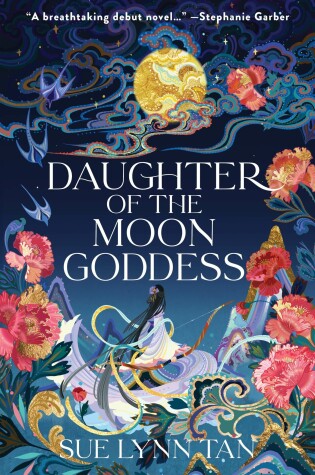 Daughter of the Moon Goddess (The Celestial Kingdom Duology, #1)

A captivating debut fantasy inspired by the legend of the Chinese moon goddess, Chang’e , in which a young woman’s quest to free her mother pits her against the most powerful immortal in the realm and sets her on a dangerous path—where choices come with deadly consequences, and she risks losing more than her heart.

Growing up on the moon, Xingyin is accustomed to solitude, unaware that she is being hidden from the powerful Celestial Emperor who exiled her mother for stealing his elixir of immortality. But when Xingyin’s magic flares and her existence is discovered, she is forced to flee her home, leaving her mother behind.

Alone, untrained, and afraid, she makes her way to the Celestial Kingdom, a land of wonder and secrets. Disguising her identity, she seizes an opportunity to learn alongside the Crown Prince, mastering archery and magic, even as passion flames between her and the emperor’s son.

To save her mother, Xingyin embarks on a perilous quest, confronting legendary creatures and vicious enemies across the earth and skies. When treachery looms and forbidden magic threatens the kingdom, however, she must challenge the ruthless Celestial Emperor for her dream—striking a dangerous bargain in which she is torn between losing all she loves or plunging the realm into chaos.

Daughter of the Moon Goddess begins an enchanting, romantic duology which weaves ancient Chinese mythology into a sweeping adventure of immortals and magic, of loss and sacrifice—where love vies with honor, dreams are fraught with betrayal, and hope emerges triumphant.

Daughter of the Moon Goddess is narrated by the immortal daughter of Chang'e, Xingyin. She's been hidden from the Celestial Kingdom, because her presence would mean death for her mother. But when her powers become strong enough to detect, Chang'e sends Xingyin away for both of their safety. Now, Xingyin is all alone in the kindgom, but she's determined to make her way back to the moon and live freely with her mother.

Did I pick up Daughter of the Moon Goddess because I loved the movie Over the Moon? Yes. That movie was my introduction to Chang'e, so I got super excited to see a book about her! Well, kind of. Obviously, this is about her secret daughter, Xingyin. The plots are 100% different, and I enjoyed them both for their differences. This one toes that line between Adult and YA, which was interesting. Xingyin is an adult, but the tone is more coming of age as she's on her own for the first time ever.

The only thing that kept me from loving Daughter of the Moon Goddess was how easily everything came to Xingyin. Every situation was set up so conveniently that there really was no conflict until the very end, and even then it was solved too swiftly. I don't want to spoil anything, but imagine Xingyin roaming around, she gets hungry, but has no food, and a random person is like "Oh no, I seem to have packed double lunch! Would you care to share, kind lady?" And it happens to be her favorite food. Then when she's faced with a difficult choice, she picks something totally out of left field and everyone is like "OMG! Of course you can choose this option that wasn't an option!" Like...what?! This goes on for the entire book. No fear of Xingyin failing.

What I did enjoy about Daughter of the Moon Goddess was that Xingyin was willing and able to do whatever it took to progress her self-improvement and free her mother. Yes, like I said, convenient situations simply fell into her lap. But she was smart enough to take them and tweak them to suit her needs. She never lost sight of the reason she was doing all of this. Even when her love for the prince threatens to distract her, she pushes through. She's also the one doing the rescuing here. Not just of her mother, but the prince and the kingdom as a whole. Sure, she might be doing it for selfish reasons at first, but Xingyin still tends to do what she feels is right. It just happens to also be self-serving and she doesn't apologize for it.

I did absolutely love the last quarter-or-so of Daughter of the Moon Goddess. The plot really picks up when Xingyin starts her dragon quest. There is one part that fell into the overly convenient trap, but the book was getting long enough that I didn't mind not having that dragged out. The ending was bittersweet, but there's a whole nother book coming! I can't wait to see what Xingyin's next adventure is.

I don't know how else to say it, but I loved this book. The characters were well rounded, the scenes beautiful and horrible all at once, and the story engaging where I couldn't put it down. Perfect. This book was perfect.