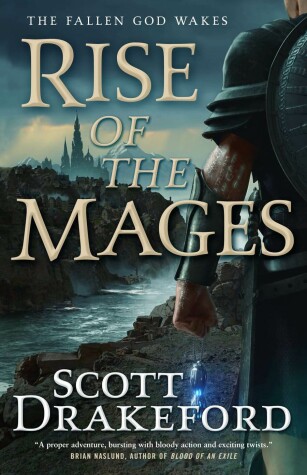 Emrael Ire wants nothing more than to test to be a weapons master. His final exam will be a bloody insurrection, staged by corrupt nobles and priests, that enslaves his brother.

With the aid of his War Master tutor, herself an undercover mage, Imrael discovers his own latent and powerful talents.

To rescue his brother, Emrael must embrace not only his abilities as a warrior but also his place as last of the ancient Mage Kings―for the Fallen God has returned.

And he is hungry.

I love randomly coming across debut novels and giving them a try. The latest debut novel to come across my desk is Rise of the Mages, by Scott Drakeford. This is a new epic fantasy novel that I'm always on the lookout for (and I know I'm not the only one).

All Emrael Ire wanted was a test that would prove him worthy of becoming a weapons master. Instead, he gets to face an insurrection. A real one, to be clear. Not a test one. As if the stakes weren't high enough, Emrael's brother has been enslaved by the corrupt nobles, who are coincidentally the insurrection.

To survive what is to come and hopefully save the day, Emreal will need the help of his War Master tutor. With her help, he'll finally understand the true talents that lay beneath his skin – and the responsibility he carries.

Rise of the Mages was a fun and compelling read that leaned on many epic fantasy tropes to carry the reader along. This made the novel feel so delightfully familiar while still throwing out surprises here and there.

Truthfully, much of Rise of the Mages felt like a series I loved as a child (The Belgariad series), so I am happy to see that new authors are stepping up to fill that void (left by necessity, look it up if you must).

There are a lot of political machinations woven into the main narrative of Rise of the Mages, which significantly adds to the complexity of the tale. Personally, though, I loved the reliance on a few other tropes, mainly the found family trope. This is one of my absolute favorites, and it added a personal touch in a novel that otherwise could have run the risk of feeling more dramatic than emotional.