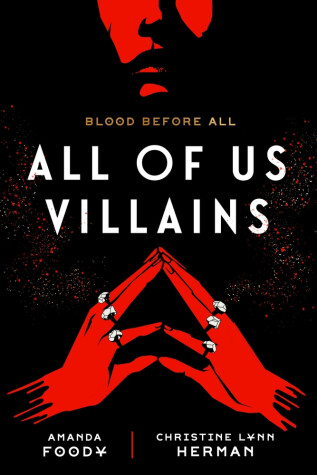 The blockbuster co-writing debut of Amanda Foody and Christine Lynn Herman, All of Us Villains begins a dark tale of ambition and magick...

You Fell In Love With The Victors of The Hunger Games.
Now Prepare To Meet The Villains of The Blood Veil.

After the publication of a salacious tell-all book, the remote city of Ilvernath is thrust into worldwide spotlight. Tourists, protesters, and reporters flock to its spellshops and ruins to witness an ancient curse unfold: every generation, seven families name a champion among them to compete in a tournament to the death. The winner awards their family exclusive control over the city’s high magick supply, the most powerful resource in the world.

In the past, the villainous Lowes have won nearly every tournament, and their champion is prepared to continue his family’s reign. But this year, thanks to the influence of their newfound notoriety, each of the champions has a means to win. Or better yet--a chance to rewrite their story.

But this is a story that must be penned in blood.

I loved this one! A top read for me this year for sure!

When I saw that it was described as Harry Potter meets Hunger Games I knew I had to read it. And it lived up to all expectations.

It’s got everything from a unique magic system, a high-stakes plot, and gruesome history. It’s told from multiple POVs but it doesn’t drag the plot down. In fact I love how we see a bit of everyone’s reasoning behind their behavior.

There isn’t too much true dark villains, but you do get angsty teens trying to live up to their families expectations who are morally grey. I have a feeling though we will get more villainy come the next book.

Ps. I am team Alistair and none of you can convince me otherwise

It's here! The novel we have all been waiting for (read: the novel that I have been waiting for!). Amanda Foody and Christine Lynn Herman have teamed up to create a new fantasy series for fans, and it all starts with All of Us Villains.

Unbeknownst to many, there is magick in our world. However, the strongest magic is hoarded by seven magickal families. Every generation they come together for a bloody tournament to decide who will wield the most power.

This year it is time for another Blood Moon, which means there are seven new contestants on the line. Traditionally this has always been a battle to the death, with the sole victor deciding the win for their family. However, these contestants don't seem content to follow the rules.

“But that was what this alliance led up to. Not a kiss stolen in the dark, or a priceless gift given without being asked.
A duel.”

Wow. All of Us Villains really did manage to pack a punch, didn't it? I can't say I'm surprised, given that we have The Shadow Game and The Devouring Gray authors working together. I honestly think I loved everything about this novel.

Picture the Hunger Games with magic, family politics, and more personal grudges between the contestants. Now you have a solid idea of what is in store in All of Us Villains. I didn't realize until now that I needed a magical version of The Hunger Games, but now I can't live without it.

“You want to know something funny?' he asked. "In a choice between staying here or going home, I'd still choose here. With you.”

As with any split perspective novel, there are some characters that I immediately took to, while others I found myself stepping back and pondering. Together they make a complete whole, and I really enjoyed figuring out how the pieces were going to fall together.

The magical system in this world is brutal and dark, and I'm not ashamed to admit that I kind of love it. I also enjoyed the more modern twists, such as having paparazzi and the like. It was a bit surprising, but I think it made the story stronger on the whole.

However, that ending was straight-up mean. Am I really expected to wait a year (at least!) before finding out what happens next? Obviously, the answer is yes. But I'm going to be counting down the days for the release (and the book doesn't even have a name yet, so it's going to be a hot minute).

Thanks to Tor Teen and #NetGalley for making this book available for review. All opinions expressed are my own.