The Veiled Throne (The Dandelion Dynasty, #3) 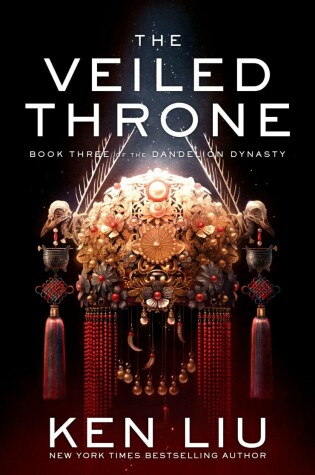 The Veiled Throne (The Dandelion Dynasty, #3)

With the invasion of Dara complete, and the Wall of Storms breached, the world has opened to new possibilities for the gods and peoples of both empires as the sweeping saga of the award-winning Dandelion Dynasty continues in this third book of the “magnificent fantasy epic” (NPR).

Princess Théra, once known as Empress Üna of Dara, entrusted the throne to her younger brother in order to journey to Ukyu-Gondé to war with the Lyucu. She has crossed the fabled Wall of Storms with a fleet of advanced warships and ten thousand people. Beset by adversity, Théra and her most trusted companions attempt to overcome every challenge by doing the most interesting thing. But is not letting the past dictate the present always possible or even desirable?

In Dara, the Lyucu leadership as well as the surviving Dandelion Court bristle with rivalries as currents of power surge and ebb and perspectives spin and shift. Here, parents and children, teachers and students, Empress and Pékyu, all nurture the seeds of plans that will take years to bloom. Will tradition yield to new justifications for power?

Everywhere, the spirit of innovation dances like dandelion seeds on the wind, and the commoners, the forgotten, the ignored begin to engineer new solutions for a new age.

Ken Liu returns to the series that draws from a tradition of the great epics of our history from the Aeneid to the Romance on the Three Kingdoms and builds a new tale unsurpassed in its scope and ambition.

The Veiled Throne is the third Dandelion Dynasty novel by Ken Liu. Released 7th Dec 2021 by Simon & Schuster on their Gallery/Saga imprint, it's an impressive 1008 pages and is available in hardcover, paperback, audio, and ebook formats. It's worth noting that the ebook format has a handy interactive table of contents as well as interactive links and references throughout. I've really become enamored of ebooks with interactive formats lately. Especially with books of this size and scope, it's helpful to be able to find names and info with a simple search.

This is a vast sweeping campaign fantasy with world politics, engineering, and really nuanced storytelling. The series contains some of the best world building I've encountered in *any* series *ever*. This is a massive series (obviously), with over 3500 pages extant, including the fourth / final book. The descriptions are powerful and the author's command of plotting and characterization are much more than competent. It is a juggernaut of a book and it took me a couple hundred pages to get re-immersed in the story, since there was a couple year delay between my reading of the second book and this, third, volume.

Readers who are previously unfamiliar with the background would be well advised to read, or at least find a precis, of the earlier books in the series. Despite the inclusion of a comprehensive dramatis personae in this volume, it's easy to get lost.

I won't write a precis of the plotline, they're posted all over. The writing is much much better than good. The plotting and pacing are good if a trifle slow in the beginning. It took quite a long time to review this book because it made such a deep impression.

Four and a half stars. Highly recommended to fans of sweeping space campaign epics.