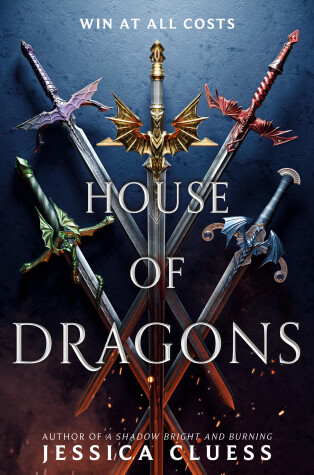 Five royal houses will hear the call to compete in the Trial for the dragon throne. A liar, a soldier, a servant, a thief, and a murderer will answer it. Who will win? Three Dark Crowns meets The Breakfast Club with DRAGONS.

When the Emperor dies, the five royal houses of Etrusia attend the Call, where one of their own will be selected to compete for the throne. It is always the oldest child, the one who has been preparing for years to compete in the Trial. But this year is different. This year these five outcasts will answer the call...

THE LIAR: Emilia must hide her dark magic or be put to death.

THE SOLDIER: Lucian is a warrior who has sworn to never lift a sword again.

THE SERVANT: Vespir is a dragon trainer whose skills alone will keep her in the game.

THE THIEF: Ajax knows that nothing is free--he must take what he wants.

THE MURDERER: Hyperia was born to rule and will stop at nothing to take her throne.


Buddy read with my babe Darcey! I mean, who else?!
First off this was amazing, the author did not hold back any punches on the twists. Things happened and i screamed no way, or holy shit, or no she did not just do that. You got 5 royal houses who have groomed their children to compete in a competition for the throne. Ok nothing new there this a theme we seen. Here were the first of many twists come in first of all their dragons and the great dragon calls the competitors to a summoning circle. Of course everyone expects it to be those they groomed, who is called is not who is to be. Second what makes this different is the traditions that surround this country. When you die if you have a dragon it eats you. Never seen that before. The uniqueness of this story does not stop there but i hate to give it all away. Just know their magic, brutal killing, some romance, and a hard fought battle for the throne. I would very much recommend this one to Game of Throne Fans, Six of Crows fans, and anyone who enjoys multiple points of views stories with dragons, yep dragons and of course dragons. Happy reading.


The five eldest children of the royal estates of Etrusia will answer The Call, their kingdom seeking a worthy competitor to succeed the Emperor, chosen by the Great Dragon and overseen by Their Graces, high priests of the temple of Delphos. Except the second born, the servant, the bastard child and the pacifist are chosen in their stead, those untrained and ill prepared. In the kingdom, the eldest member of each royal linage is conditioned and trained to take part in a series of tests known as The Calling, where the mythical Great Dragon chooses a child and their dragon mount to compete. The narrative is told from five points of view, each character easily distinguishable and a glimpse into their lives before and after The Calling, as they struggle with the expectations placed upon them.

Emilia has lived in isolation, her parents believing she is dangerous and concealing her illegal ability. Being chosen for The Call is an opportunity for Emilia to escape her confines, she hadn't expected to find former childhood friend Lucian also competing in the trial. Lucian has conquered lands and its people alongside his father and warmonger sibling, leaving the young man traumatised and vowing to atone for his brutality and using a pacifist approach to conflict. Emilia and Lucian are both wonderful characters, gentle, compassionate and both wanting to avoid the brutality of the trials. It was lovely to see them reconnect as tentative friends and watch their subtle attraction develop.

One of my favourite characters is Vespir, the servant and dragon keeper. Vespir is a servant within one of the royal houses, treated with contempt and seen as less than human. Her true companions are the dragons within her keep until she falls in love with the boss' daughter. Vespir shouldn't be underestimated, she's a survivor, she's resourceful and deliciously crafty. Although in a gentle, totally non backstabby kind of way unlike Ajax. Ahh Ajax, the bastard son, among a sea of bastard children, created from a sexual assault and tormented by his noble father and his legitimate children. Ajax has always struggled to fit in, surviving through any means necessary. He's well aware his lack of attractiveness means he can slip under the radar, a little like a cheeky cat burglar, although not as slick as he pretends to be.

A fair warning about our last competitor, she's ruthless and bloodthirsty beyond compare. Hyperia isn't a young woman to be played the fool, she's cold, calculated and will allow no one, absolutely no one to stand in her way of becoming victor. Oh my goodness, this girl makes Mia Corvere look like a Catholic school girl. She lives for her kingdom, the admiration of her father and the fear she instils in others.

The world building is breathtaking. Spiralling cities steeped in history and grandeur, rustic villages and desolate woodlands, beautifully atmospheric and wonderfully imagined. And the dragons! When a dragon hatchling is born, they choose their human companion, connecting to their spirit as dragon and rider become one. When their human companion passes, their dragon eats them which wouldn't be an altogether bad way to go. I loved Dog especially, Ajax' companion. He's playful, loyal and befitting of his name.

House of Dragons was glorious and left me wanting more! The brutality, the loyalty, companionship and moments of friendship among the fierce competitiveness is entwined so beautifully, shades of a young adult Game of Thrones that even reluctant fantasy readers will enjoy. Best be off, need to see a man about a dragon.
This was so unexpectedly good! The sense of adventure is amazing and the story itself is so unique and thrilling. I LOVED the different POVs and fell in love with each character for their own uniqueness. The times of snarky, fun dialogue kept me wanting more and more and I couldn’t put the book down. I felt like I expected what happened at the end, but not how the story actually got there.