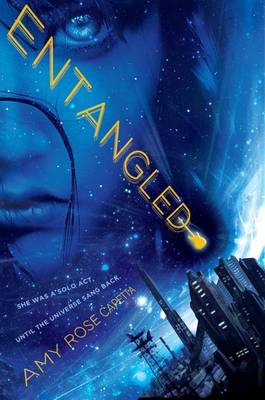 Alone was the note Cade knew best. It was the root of all her chords. Seventeen-year-old Cade is a fierce survivor, solo in the universe with her cherry-red guitar. Or so she thought. Her world shakes apart when a hologram named Mr. Niven tells her she was created in a lab in the year 3112, then entangled at a subatomic level with a boy named Xan. Cade's quest to locate Xan joins her with an array of outlaws - her first friends - on a galaxy-spanning adventure. And once Cade discovers the wild joy of real connection, there's no turning back.

The blurb for Entangled seriously had me going “huh?” And that is exactly how I still felt at the end of it. That was just weird, and mostly not in a good way. I’m also terribly confused about almost everything that happened. Entangled is the bizarre Sci-Fi adventure of Cade, a human girl with her guitar trapped on some alien planet. After a show, Cade learns that her particles are entangled with a boy’s after they were experimented on as babies, and now he needs her help to avoid being tortured and killed by their enemies. Cade sets off on an epic space quest to find her “brother” since she’s glad to finally not be alone in the universe anymore. Along the way she meets new friends, some aliens, and of course those aforementioned enemies. While the story is exciting and entertaining at times, I mostly didn’t care, since I was more concerned with all of my questions about the future it’s set in.

What I did like about Entangled was the aliens. They don’t play a huge part in the overall plot, but I liked them. There are many different kinds, and for the most part they don’t like humans. I’m not completely sure why they don’t like humans, but they don’t. Not all of them are bad though. Cade does meet two in particular who were great! One is a kind of living space ship actually, and I thought she was really cute. It’s quite imaginative and unique. I also like the ideas the author presented, even if I didn’t fully understand them. Quantum Entanglement is an interesting concept and is the backbone of the story, but I wish it had been explained more. Not necessarily what it is, since I did follow that, but I wasn’t clear on what scientists were trying to achieve with it, and why they had enemies so set against it.

I guess my main issue with Entangled was the world building. I was confused from page one, and was in a constant state of confusion for most of the book. It isn’t until half way in that we’re told why humans are on other planets to begin with. This is something that had been nagging at me, since the aliens really don’t like humans, so why are they there? And secondly, it seems like most humans come down with “spacesickness” and are kept in overcrowded, quarantine type places. The explanation we do get didn’t feel complete though, especially when we know that Cade and Xan’s entanglement was suppose to help with spacesickness. How? I have no idea. Nothing really fit together for me. By the end I was even more unclear about the purpose of entanglement, and why Cade needed to rescue Xan, and why he was kidnapped in the first place. Basically, I think the plot was kind of a mess.

Entangled is an interesting book that just did not work for me. I don’t deny that there are a lot of fun and unique elements to the story, but as a whole, none of them fully fit together. Cade is kind of bumbling through space, picking up bits of information here and there, but what is true and what is lies? I still don’t know upon finishing. Cade was also a hard character to connect to and care for. She’s not a bad person, but I felt very disconnected from her. I also didn’t understand why she kept randomly getting half-naked. Was that really necessary, other than for shock value? I don’t know. Entangled was just a weird mess, but I’m sure it’ll work for a specific audience. That audience was unfortunately not me.