A Court of Silver Flames (Court of Thorns and Roses, #4) 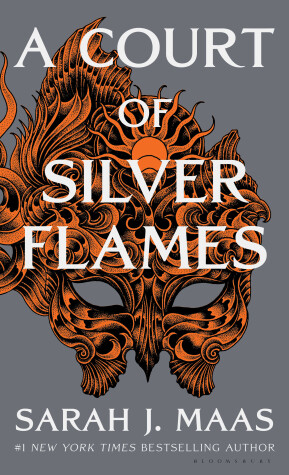 A Court of Silver Flames (Court of Thorns and Roses, #4)

Nesta Archeron has always been prickly—proud, swift to anger and slow to forgive. And since the war—since being made High Fae against her will—she's struggled to forget the horrors she endured and find a place for herself within the strange and deadly Night Court.

The person who ignites her temper more than any other is Cassian, the battle-scarred, winged warrior who is there at Nesta's every turn. But her temper isn't the only thing Cassian ignites. And when they are forced to train in battle together, sparks become flame.

As the threat of war casts its shadow over them once again, Nesta and Cassian must fight monsters from within and without if they are to stand a chance of halting the enemies of their court. But the ultimate risk will be searching for acceptance—and healing—in each other's arms.

I wanted to love this book desperately. And in the beginning I did. But I do feel that Maas did Nesta a little dirty. I wish some the characters understood Nestas PTSD and everything she went through, but then again it would’ve been a boring book if they had. Nesta is by far my favorite character and I loved her journey which is why this book got four stars. I even love her more than Feyre to be honest. It was an enjoyable read with lots and lots of smut. The real action doesn’t really take place until the last 100 pages. Excited for the other two books. Hopefully we get more of Azriel.

Stopped reading on page 271. That was a surprise because I thought I was going to love this book. I'm generally a big fan of SJM's books.

I had two problems:

Fuck's sake. She was AWFUL. What an annoying brat. I get that she went through some bad shit, but do you have to be a complete asshole to everyone who's trying to help you? Not to mention just being so childish. “No I'm not going to train with you. I'm just going to sit on this rock and do nothing. BECAUSE!”

Super super minor spoilers from the first ~200 pages: Then she did start training and tried to encourage others to join her, but they didn't. And that REALLY upset her. Seriously, girl? You were a right bitch about refusing to train, now you're upset when others don't want to? Like… this is the same thing? Lol.

Wow I did not care about the plot.

Annoyingly it felt like a continuation of the original trilogy. I think I expected a completely new story, but instead it felt a bit like, “That problem we already solved is rearing its head again.” This meant two things:

Overall I think the plot was just really weak and boring. I know this book is meant to be a romance with fantasy elements (as opposed to the other way around), but I almost would have liked it better if it just stopped trying to even pretend with having a fantasy plot. It was so not the book's strong point. (And I say that as an absolute lover of heavy fantasy books.)

It seemed like Rhys got a bit screwed over in this book. I got a little bit of it, but also read a few spoilers and found out some more. In short (and without spoilers for this book): I feel like in the original trilogy, Rhys was pitched as the guy who gave Feyre freedom. Tamlin held her captive and took her freedom away; Rhys gave it back. But in this book, there were very much some Rhys behavioural issues that felt a lot like taking away her freedom. Spoilers: Putting an impenetrable shield on her at all times because of her pregnancy. And the spoilers I read implied he withheld information from Feyre about her pregnancy.

A ​Court of Silver Flames is now officially my favorite book, Nesta Archeron is my favorite character and Nessian is my favorite romance! I'm saying it again: Sarah J. Maas you are a genius!
Well, I don't hate Nesta anymore! Turns out I never did! Probably because I am a total Nesta. For all of the dark sections of this book, it was so uplifting. It was awesome to have a new group of Valkyries form, bringing Nest and her friends healing, power and strength in their ass-kickery.

I loved reading from Cassian's perspective. I love the three brothers - can't get enough of them which leads me to . . . GIVE ME AZ ALREADY NOW PLZ!!! Rhys is hot, Cassian is hot AZ IS MYSTERIOUS AND HOT :)

My biggest complaint is if I have to read "like seeks like" one more time I am going to puke.
Star Rating: —> 5 Stars

Court of Thorns and Roses (4 books)