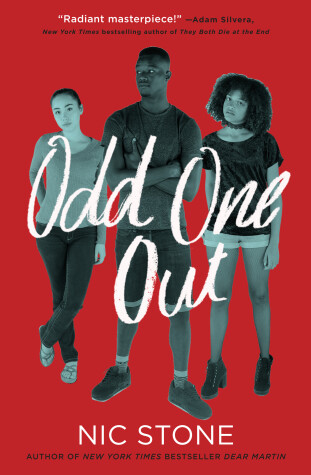 From the #1 New York Times bestselling author of Dear Martin comes an honest and touching depiction of friendship, first love, and everything in between. Perfect for fans of Love, Simon and What If It's Us.

Courtney Cooper and Jupiter Sanchez (Coop & Jupe!) have been next-door neighbors and best friends since they were seven-years-old. She's his partner-in-crime and other half. But lately, Cooper can't ignore he might want something more than friendship from Jupiter.

When Rae Chin moves to town she can't believe how lucky she is to find Coop and Jupe. Being the new kid is usually synonymous with pariah, but around these two, she finally feels like she belongs. She's so grateful she wants to kiss him...and her.

Jupiter has always liked girls. But when Rae starts dating Cooper, Jupe realizes that the only girl she ever really imagined by his side was her.

"Fans of Nic and new readers will find themselves engrossed." -Teen Vogue

"Declaring yourself--how you would like to be represented and whom you want to love and connect with--is treated with real tenderness." -The New York Times

I love love triangles, so I was definitely looking forward to Odd One Out's bisexual love triangle! Jupiter and Courtney have been friends forever. Courtney wants more, but Jupiter is a lesbian. Then Rae moves to town and Jupiter is immediately smitten, but Rae starts falling for Courtney. Clearly, this is going to be a big mess.


Messy is the best way I can describe Odd One Out, and mostly not in a good way. I was certainly intrigued, but everything felt so disjointed. It's almost as if there were three totally separate stories happening here and they got throw into a blender. There's the actual love triangle, which wound up rubbing me the wrong way. Then there's Courtney and Rae's quest which was super weird, but I was oddly into it. That didn't get enough attention though. Finally, there's Jupiter's struggle with her sexuality.


I did not like how Courtney was basically just waiting for Jupiter to reciprocate his feelings. I definitely believed he had feelings for her, but it was kind of gross how he just could not get the fact that she was a lesbian through his head. Of course, this comes into question when Jupiter starts questioning her sexuality. The ending basically felt like straight boy wish fulfillment.


As for Courtney and Rae's relationship, it started out rocky, but then they bond over their childhood hero, Carnival Carl who mysteriously disappeared one day. A day that is etched in both of their memories forever, since that's the same day Courtney lost his father and Rae's mom left. They want to find out what happened to him to find some kind of closure. This could have been its own book with a fun mystery and possibly some high emotions. Instead, it felt kind of thrown in to get these two close to each other and isolate Jupiter.


The last third of the book is focused on Jupiter and her coming to terms with her feelings for Rae and Courtney, and her sexuality in general. This was interesting, but a lot of it felt forced. There is this problem with people assuming lesbians just haven't found the right guy yet, and this is brought up, but it felt like it was mentioned so that it wouldn't look like that's what's happening with Jupiter and Courtney. He didn't "turn" her. It was just very jumbled and like the author was trying really hard to make sure that the reader doesn't think this. That could have been accomplished by spending more time with Jupiter's emotions and confusion over what she was doing with her best friend.


In the end, Odd One Out just didn't work for me. The themes and premise are excellent, but it wasn't pulled together.
3.5 stars
Odd One Out is a solid story, but the narration didn't work so well for me. It was difficult to distinguish the three different narrator's voices, and I found I had to go back to check whose thoughts I was reading more than once.
I really enjoyed the whole inner discussions Jupiter had with herself. About labels, mostly. Because what are all those labels for? Ourselves? Or other people so that we can fit into their world view? I think that's what I liked the most about the story, because labels can be very restrictive.
This was a story about love, friendship, questioning, assigning labels, and removing labels. It was about changing and accepting change, and I really enjoyed it.

I had featured this book on Can't Wait Wednesday, and one of the things I talked about expecting was drama, lots of drama. Well, I can confirm there was tons of drama. This was one super charged love triangle, and I will admit, I was really happy with the way it all turned out.

I won't lie, I adored Coop and Jupiter. They had such an amazing friendship, and I loved all the history they shared. I found Rae a little annoying, but I appreciate how she altered the dynamic and pushed Jupiter and Coop to confront some things that had been lingering for quite a while.

I listened to the audiobook, and I have to mention how amazing I thought the actor, who read Coop was. His delivery was so good, and I couldn't decide if I thought Coop was just an amazing character or if the narrator made him even more amazing than he was. I thought Nic Stone did an incredible job reading Jupiter, too. Her delivery was great, and the emotion was spot on.

Stone also shares how personal this book was to her, and I really appreciated her sharing that with us readers. I think there are a lot of teens, who will benefit from her story.