The Poison Prince (Hostage of Empire, #2) 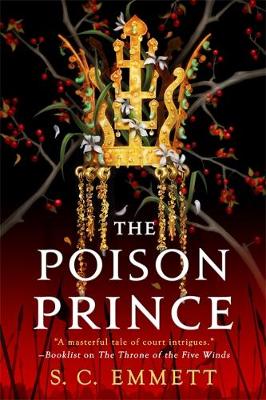 The Poison Prince (Hostage of Empire, #2)

The lady-in-waiting to the princess of a conquered kingdom must navigate a treacherous imperial court, in the second book in a medieval East Asia-inspired epic fantasy trilogy.

The crown princess has been assassinated, reigniting tensions between her native Khir and the great Zhaon empire. Now her lady-in-waiting, Komor Yala, is alone in a foreign court, a pawn for imperial schemes. To survive and avenge her princess, Yala will have to rely on unlikely allies-the sly Third Prince and the war-hardened general who sacked her homeland.

But as the Emperor lies upon his deathbed, the palace is more dangerous than ever before-for there are six princes, and only one throne.

The Throne of the Five Winds was one of my top reads so far this year, so naturally I had high hopes for the sequel. Luckily I wasn’t disappointed!

The Poison Prince continued everything I loved from the first book. This series nails court intrigue. It’s like Game of Thrones, but without the magic. Or dragons. But if you’re looking for a fight for the throne, hidden behind assassinations and scheming, Hostage of Empire is perfect.

I love how despite having a little time from everyone’s point of view, I still don’t fully grasp every character’s intentions. They certainly allude to what they want, but it’s still not certain whose side they’re on or what lengths they’re willing to go to (or have already taken). Because of that, I have no idea how this series is going to end, and I love that. There’s already been one death I didn’t expect!

The sequel also continued a little love triangle that was hinted at in the first book. I have to say, it’s masterfully done. This is the only love triangle I can recall actually enjoying. I think it’s because it’s not two people tripping over themselves to fawn over the third. Hostage of Empire creates a little distance between all the characters, because of the huge focus on manners and propriety. So although two characters may be crushing on Yala, they keep their feelings closely guarded, and Yala doesn’t outright say if she reciprocates those feelings or not. That also means that even though Yala has two choices before her, it still wasn’t immediately clear which one — if any — she prefers. (Until the end!)

I’m pleased to add The Poison Prince to my favourites, right next to The Throne of the Five Winds. I’m confident the third book will be there as well!