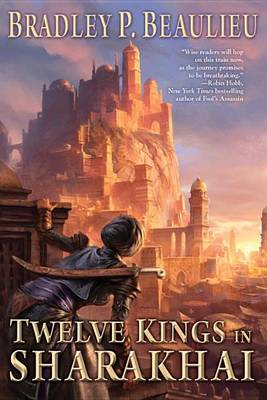 Sharakhai, the great city of the desert, center of commerce and culture, has been ruled from time immemorial by twelve kings—cruel, ruthless, powerful, and immortal. With their army of Silver Spears, their elite company of Blade Maidens, and their holy defenders, the terrifying asirim, the Kings uphold their positions as undisputed, invincible lords of the desert. There is no hope of freedom for any under their rule.

Or so it seems, until Çeda, a brave young woman from the west end slums, defies the Kings’ laws by going outside on the holy night of Beht Zha’ir. What she learns that night sets her on a path that winds through both the terrible truths of the Kings’ mysterious history and the hidden riddles of her own heritage. Together, these secrets could finally break the iron grip of the Kings’ power…if the nigh-omnipotent Kings don’t find her first.

DNF 11% through. I hope I give it another try at some point though. This book absolutely was not bad, it just became very, very slow. It had a killer beginning with some kind of pit fight, but after that it was just slooow.

I hadn't really gotten to the meat of the story yet though, and there's definitely some interesting stuff here. So I hope I give it another shot at a better time.

4.5 stars. So good.
It's not often these days that a book, particularly the first in an apparent series, comes in at a whopping 580 pages. Even less often does the doorstop turn out to be quite such an excellent read. Both cases hold true in 'Twelve Kings in Sharakhai', the first book in The Song of the Shattered Sands series. Be warned, however - there is a lot going on in this first book. Try to read it too fast (even though it's compelling), and you'll feel like you just came out of a book coma.

Ceda is a young woman from the slums of Sharakhai, a city in the desert. She is also a "pit dog", one who fights in the pits for her living. She has honed her skills because she has a goal - vengeance. Finding the one responsible for the death and humiliation of her mother, and killing him. The problem? The one responsible is one of the Twelve Kings - rulers of Sharakhai for the last 400 years. Human, all. They can be killed. But they were "blessed" by the Gods with their long lives and their grip on the city. They are ruthless, and they want everyone to know it. When Ceda goes out on Reaping night against the law, she starts a chain of events that she, nor the Kings, could ever have predicted.

First - the heroine. Ceda is a strong, clever young woman. She is human, and has her faults. But make no mistake - she is truly an excellent main character. She is well-developed, and battles with the same conflicting emotions and issues that all people grapple with. Only in her world, there is magic, Gods exist, and Kings can live 400 years. As for the other characters, they have also been extremely well fleshed out. There's not a one that I couldn't picture in my head. No one is a cardboard cutout...all have good and bad, and make decisions that reflect that.

The setting - incredible. The details that went into crafting this world are amazing. From the sand ships, to the creatures that roam the desert, descriptions of the city and it's different areas and inhabitants. There was a lot of work put into this, and it shows. However, the truly pleasant thing as a reader is that it's never dull or dry. Everything is woven into the story, in context, in a time that is fitting. There are no crazy-long passages there just to tell the reader all about something. The author allows the reader to get a feel for the setting, then bit by bit brings it more into focus.

As for the story, it's done just as well as the rest. It's a unique take on medieval fantasy, with elements from today thrown in (carefully) here and there. And yet it all makes sense and works with the characters and the surroundings. The characters and the setting are woven together so well that sometimes it can be hard to tell where one ends and the other begins. It wouldn't be a stretch to say that, in some ways, the setting itself - the city and the desert - ARE characters.

Overall, I was taken aback when I realized how darn big the book was. Then I groaned. Then I put it aside for a few days in dread. Then I started reading...and once I did, it was hard to stop. And when I *did* have to stop, my mind was figuring out when I could get back to the book. Yes, I finished in a book coma. I had to give my brain time to fully absorb what I had read before I could go any further. I am still mulling over details and thinking on the story - and in my mind, that is the mark of a great book. When it's done, and you're moving on, part of that story has permanently made a place in your mind and your heart. So it is with 'Twelve Kings in Sharakhai'.