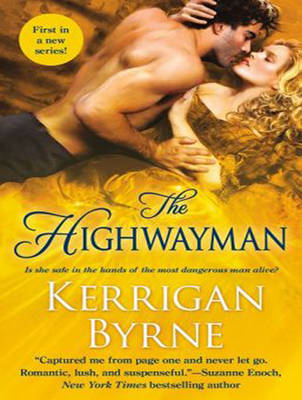 A Beautiful Widow: Farah Leigh MacKenzie has known love and heartbreak. It was a young, passionate, forbidden love that she doesn't believe any man can replace and it ended tragically when her husband was sent to Newgate and died there. Years later, the beautiful young widow works for the Bow Street Runners and it is there that she encounters The Black Heart of Ben More, Dorian Blackwell, one of the wealthiest, most powerful, most dangerously lethal men in London. She is drawn instantly to this man who should make her want to flee. And for Dorian what he wants, he gets and he wants no needs Farah as he has needed no one else. Kidnapped!: When Dorian kidnaps Farah from her home and whisks her away to his lush sanctuary in wild Highlands of Scotland, Farah believes that her life is over. But in fact Dorian has saved her, for Farah is hiding secrets of her own-secrets that have put her life in danger. But Dorian trades in secrets, especially ones as juicy as hers. He makes a scandalous demand, marry him and he will protect her and he will restore what was stolen from her all those years ago. In return, she will help exact revenge on his enemies.
But what Dorian does not expect is to be caught so sweetly and irrevocably by a woman who threatens everything he holds dear.

I’ve been meaning to read one of Kerrigan Byrne’s books and finally got a chance during Romanceopoly 2020. The Highwayman is the first book Kerrigan Byrne’s Victorian Rebels series, and I had a hard time putting down this book. I loved how Kerrigan Byrne immediately grabbed me from Chapter One to the Epilogue.

The first chapter introduces readers to Farrah and Dougan and how they met when they were young at an Orphanage. These two were immediate soulmates until they were ripped from each other due to Dougan protecting Farrah. Now, as an adult, Farrah is working for Scotland Yard and lives her life as a widower. She ends up crossing paths with the most influential man in London, Dorian Blackwell, the Blackheart of Ben More, when he is captured and questioned by her boss. He’s known as a man that wreaks vengeance everywhere he goes on the people that wronged him. He also gets everything he wants, and now he wants Farrah. He ends up kidnapping her and swooping her away to the Highlands. He has a mission, though, to protect her and also help her gain what she lost, but Farrah doesn’t trust the dark and tormented man. After a while, though, she starts falling for Dorian, even though she shouldn’t since her first love Dougan still holds her heart.

Dorian Blackwell is one man that I fell hard for since he’s a dark and tortured soul that has so much hate in his heart. Although he has been accused of not having a heart throughout the story, and I knew why he had no heart after Kerrigan Byrne brought to light what happened to him when he was imprisoned at Newgate. He knew Farrah’s Dougan very well and swore to find and protect Farrah, who was known as the Fairy. The minute he finds Farrah in the story is when readers will realize Farrah is one of his weaknesses. I should’ve not liked Dorian on how he came off to Farrah. One scene alone, he becomes an exploding cannon when Farrah touches him. There’s also the first bedroom scene between the two characters, but of course, Farrah realized then that something was wrong with him.

I adored Farrah too in the story with how she was a fighter in her way. She’s innocent and kind to everyone she meets throughout the story. Although she fought with Dorian, even when she wouldn’t win, she was determined to find his heart and also find out the real Dorian. Farrah was in danger in the story, and a man like Dorian wanted to protect her and knew her Dougan. She wanted to trust him. She also became attached to the men that Dorian had under his employ, and those characters kept Dorian on his toes too.

The best part of the story though, was when the truth came to light about Dorian. I had a feeling though from the hints that Kerrigan would put in the story that eventually Dorian’s identity would be revealed. Once everything fell together, it was heartbreaking. This story is a second chance at romance for both characters. Dorian learning to have someone touch and love him and Farrah, teaching him how not everyone will harm him. I could go on and on about this book, but don’t want to give anything away.

Kerrigan Byrne has now become an author I need to read more books from, and I’ve already added the next Victorian Rebels book to my Goodreads TBR list and hope to read it soon. I love Kerrigan’s writing style. I tend to be picky with Historical Romance books, but I have a feeling that Kerrigan will make me love this genre even more.

If you’re looking for a Historical Romance book that has a tortured/damaged hero and innocent/sweet heroine, then this book is for you.

The hills are alive with the...Victorian Rebels

I was so bloody excited when I saw The Hunter in the Audible Escape package. Yes, I know this is The Highwayman, but if The Hunter was there, then, it only follows that the rest would be there. I have waited what felt like YEARS for this series to become available in Australia... AND NOW IT'S HERE!!

It was everything I was hoping for and more. Derek Perkins has turned a fabulous story into an AMAZING experience. I wore a goofy smile for the first hour of listening. Unfortunately, it was a wee bit inappropriate considering the darkness of those initial minutes, I just couldn't help myself. I needed to 'see' Farah and Dorian again, especially their first meeting and when they fell in love. It was sweet and also a little bit heartbreaking. But, luckily I knew where I was heading and I could brace for the ugly parts.

This was the start of my love affair with the Rebels, and I loved catching up with them all. I just wish I could give it more stars because the audio, enhanced my love. I will definitely be going on with the rest of the series, and there's a pretty good chance I won't take a break until I finished.

Next up... it's time to see The Hunter fall in love with his prey.

Tingling from this book magic...

The Highwayman gave me tingles and I felt book magic with the turn of each page. I was drawn in, living and breathing this book. Hubby and kids had to fend for themselves, phones had to be answered by someone else and food was only eaten to keep up my energy. I was looking into the lives of people that seemed real. I wanted to walk into Scotland Yard and be a character witness. I wanted to be at the dressmaker's to see how a gown was fitted. I wanted to stand against predators who attacked the less fortunate. It was an emotional read for me that left me on a high. Not many books suck me in as much, or as well as this one did. I was drawn to the characters and wanted to see them make it through.

We meet a very young Farah and Dougan who live in an orphanage. Farah sees that Dougan is in pain and helps him. They form a bond, give each other support and swear to love each other for eternity. This is a very young love that is tested from the beginning. Eventually, they are separated but neither will forget and keep their memories locked tight in their hearts.

Life goes on. Farah works in Scotland Yard and is faced with some very unsavoury characters. One of them is Dorian, a criminal mastermind who runs the bad side of town with an iron fist. Farah's boss is on an endless mission to bring him to justice with very little success. After many years of being separated from her love, Farah thinks about moving on with her boss Morley, who shows an interest in her. After meeting Farah, Dorian has a different idea.

I don't want to go into much detail as it will definitely take away from the experience if you decide to try it. I will say that this story was full of intrigue and I never felt it dragged. Besides the main characters, I loved Murdoch, Frank and Gemma. Morley was an interesting character as well and by the end I respected him. He could have easily made things worse, but he kept his dignity and that left me disappointed he wouldn't find a HEA (yet???).

This was my first Kerrigan Byrne story and it will definitely not be my last. One of the best historical romances I've ever read.

The Highwayman feels unlike many historical romance books, especially those set in the Victorian era. Dorian almost belongs in a much earlier time, one where capturing fair maidens and taking them to your faraway castle is not far out of the norm.

Despite Dorian capturing Farah and spiriting her away to his castle, he does it for her protection---seeing as someone wants her dead. Dorian is an interesting character, one who takes a bit of warming up to, at least for me. The danger in incredibly scarred (inside or out, but mostly inside) characters is that it can be hard to believe that love can truly conquer such intense pain. It's nice to pretend that it could, but it's gotta harder for me to suspend belief over the years.

Farah, for her part, finds herself caught in Dorian's spell, and not just because he held her captive. (Heh.) She's lived a quiet life since her escape from an orphanage at age 10, hiding a secret from everyone (including us, for a time). She's a strong character in her convictions, and seeing her attempt to tame Dorian is well worth the read.

The secondary characters in The Highwayman get just enough page time that it's impossible not to wonder what comes in book 2.