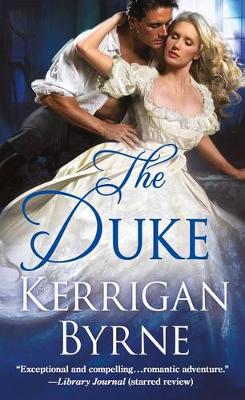 Imogen Pritchard is thrown back together with Cole Talmage, the Duke of Trenwyth, who seduced her years earlier when she was a maid in a brothel, first as his nurse and later as his neighbor after she becomes a wealthy widow.

Oops..I did it again

That went too bloody fast.

I keep telling myself I should slow down but I'm really enjoying my re-read/listen of the Victorian Rebels. Firstly, because they are fantastic stories and Kerrigan Byrne is a LEGEND, and secondly, because Derek Perkins is a master at his craft.

The one thing that is standing out with my re-read/listening experience, is how many clues for the future stories we get with each instalment. A big goofy grin comes across my face when I realise The Scot, The Duke, and The Knight are coming to life.

I forgot how much of a DOUCHEWAFFLE Cole is. My heart hurt for Imogen with every insult that passed his lips. Even knowing how it plays out, I was doubting that I could ever forgive him for the hurt he caused. Such an arrogant jerk with lofty ideals, the scene at Imogen's charity event made my stomach turn. I know he comes good at the end, but I was less than impressed with what came out of his mouth.

I wish I could slow down, but alas, it's too late. I must go on!! It's time to catch up with The Scot Beds His Wife.

Stop the world…I need to read.

After finishing The Duke I have come to the conclusion that this series is my crack. I really cannot get enough of the Victorian Rebels and I am enthralled from the first page to the last. The Duke was bloody amazing. I refuse to say this series gets better or this is my favourite so far. Each and every one of the Victorian Rebels, at the time of reading is my favourite. I’m addicted and I have no desire to ever be rehabilitated. If Kerrigan Byrne ever announces a final in this series…I WILL BE DEVASTATED!!

I’m not going to do my usual ramblings for this review because I went into The Duke blind and I think the experience was better for it. I can confirm that the beginning had me a little surprised, completely sucked in and even a wee bit flushed and breathless. Kerrigan Byrne has given us an original storyline where you question how there could ever be a happy ever after for the couple.

The author has a brilliant way of taking you to the dark side and counting your blessings that the ruthless giant by your side is there to protect you and eventually cherish you. Yes, I am the heroine every time, so that means I have already - worked at Scotland Yard, been a beautiful and famous actress, survived a mental asylum and now I’ve nursed a hero back to health.

Each instalment gives me an opportunity to step back in time and experience the highs and lows of living in the late 1800s. I admire the women I become and learn to love the men who stand beside me.

Again, I have to state that The Duke was bloody brilliant. The heroine was strong, resilient and generous. Her life is dedicated to helping others and I admired her strength in facing challenges. The hero we meet at the start is very different from the hero we end up with. Both are arrogant, strong and intelligent but the hero, in the end, can only see the light with his heroine by his side.

The Victorian Rebels does not shy away from the dark side of our history. We see “gentleman” use their positions to take advantage. The author does not hide the ugly side of London where prostitution isn’t a choice, debts are paid by whatever means and reputations can be tarnished in the blink of an eye. Each instalment has violence, foul language and abuse but for me, it’s never OTT or unnecessary. It’s just part of the whole picture.

As per usual, I have finished The Duke desperate for more Kerrigan Byrne.

I received this book for free in exchange for an honest review. This does not affect my opinion of the book or the content of my review.

Byrne is back with another fiery tale of Victorian Rebels in The Duke. The three couples featured in the previous novels are back as well to help the wayward Duke and the nurse who vexes him.

This was my first read by Byrne, but it will not be my last. I was transported by her writing style, vivid imagery, and her development of complex characters. The ultimate highs and the tremendous lows each experienced were intrinsic to the story and so well crafted, I can’t see any historical romance lover shying away from hours in this world.

To begin with our heroine, Imogen Pritchard. Her story is one of the sacrifices a woman of the 1870’s had to make to survive. Imogen worked as a nurse by day to support her mother and younger sister. By night, she was forced to work serving drinks at the Bare Kitten, a whore house, due to her late father’s debts to the proprietor. Enter the newly appointed Duke of Trenwyth, Collin “Cole” Talmage. With an offer of twenty pounds, the proprietor goes back on his word and makes Imogen give up her virginity to the duke. Their night was sweet, explosive, and passionate. A night she would never forget. A feeling that would hold him together in the darkest hours of his life. Soon after, Cole was taken prisoner and spent months in jail. When he returns to England, he becomes a patient of Imogen. She goes against orders and ends up saving his life only to have him wake and not remember her.

This is where I can’t go much further with the story for fear of giving away any of the good bits. Let me say that the two get to know each other after they both go through tremendous transformations. Even with the number of tears I shed on behalf of this story, there was more than enough passion to make up for it.

I’m looking forward to reading the first three novels and the fifth installment, The Rogue Takes a Wife, scheduled for release in October 2017.
This review first appeared on I Heart Romance & YA

This is a spoiler filled review.

Hello to my very first disappointing read in 2017! I thought it was quite unfortunate that I finished reading this disappointment this morning!

I mean, am I reading the wrong book? Isn't Imogen supposed to be a SPY?! I feel so betrayed! I also thought the timeline to be off. They met 1 year ago, the Duke is now injured, he had to heal, he went to America, and other places and the entire thing took 3 years from the start of their meeting! This was 1876 mind you, and I don't think that the physicians, no matter how "advanced" they are could have the Duke up and running in a few weeks! I mean, he just lost A HAND and almost died of septicemia, for heaven's sake. Now I'm not sure how potent the antibiotics of that time were, but I'm pretty sure it would have taken months for him to be cured. Much less go traipsing about America and going to different countries looking for Ginny and mountain climbing on his prosthetic hand? Travel back then took weeks, if not months! To say I am upset doesn't cover it. I absolutely LOVED The Hunter and I thought The Highwayman and The Highlander were okay, but this one left me speechless. In a bad way.

The other thing that infuriated me about The Duke, was in fact, THE DUKE! He was pretty much unlikeable, in my opinion. If you know me, I absolutely adore alpha heroes with a lot of baggage but Collin just did not endear me to him at all. Not to mention that scene in the library which was pretty horrible, if you as me.

I understand his motives. He was tortured for almost a year and his only source of escape were thoughts of Ginny and their one night stand. It is understandable to say that he wanted to find her which became his obsession, but when he actually found her, well, I didn't agree with what he did immediately after.

Read the full review on I Heart Romance & YA